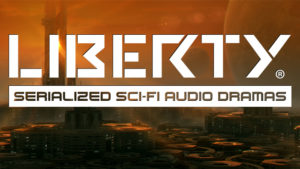 Dossinger Publishing has two free standalone podcasts that both take place in their Liberty Universe available for download NOW! Tales from the Tower is a serialized horror podcast while Critical Research is a fully voiced science expedition podcast with immersive sound effects and ambiance.

Unfamiliar with the world of Liberty?
For hundreds of years the colony of Atrius has been cut off from humanity and endured generations of civil war. What remains is a gleaming city, but beyond its walls sprawls a lawless expanse known as the Fringe. Are the violent gangs beyond the wall as horrific as the government is telling us?

Embark on a dangerous expedition into the unknown with Critical Research. To discover more about this impending threat and study its violent inhabitants, a team is assigned to infiltrate the Southern Fringe. Travel alongside Dr. Kovski, a Citizen pulled from the field of theoretical Fringe studies, as he leads the dangerous scientific expedition with no promise of return. No training could possibly prepare the team for what’s to come.

Join the Citizens of Atrius and discover the horrors that lurk in the steel and shadows in Tales from the Tower. Stories span numerous phobias from insomnia to sinister Citizens to fiendish technological monstrosities and each episode brings a new level of discomfort to frighten you long into the night. While the bulk of the stories are written by the core Liberty team, some are contributed by guest authors like Ben Thompson (Badassoftheweek.com) or Pacific S. Obadiah (Lake Clarity). Season Two of Tales from the Tower will be infecting iTunes worldwide on May 2nd with the novella-length premiere Excuse Me which will follow a series of related missing persons cases.

Both podcasts boast incredible voice talent including Dave Fennoy (Walking Dead), Lani Minella (Borderlands, Diablo, Nancy Drew), David Cummings (The NoSleep Podcast), and (Peter Lewis The NoSleep Podcast). Check out both shows at nerdyshow.com or find them on iTunes, Stitcher, or however you listen to podcasts.

The Liberty creative team has also hosted numerous panels throughout the country at Comic Con events to raise awareness for the audio drama medium and is scheduled to appear at a number of events throughout the year. Additionally they have released a few behind the scenes episodes that explain how to go about creating an audio drama.