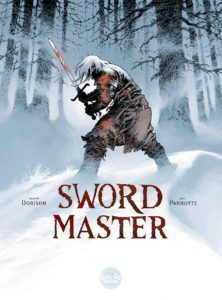 It’s 1537. Deep in the lost mountains of Jura, a group of fanatical Catholic mountain people track a young Protestant and his guide. Big mistake. The latter is no other than the ex master-at-arms of Francois I, Hans Stalhoffer. After being defeated in an unfair fight, Hans had decided to exile himself from the court. Some years later, the surgeon that saved his life and his young apprentice ask for his help. They wish to travel undercover to Switzerland to publish the Bible in French. The only possible route is to take the infamous Jura Pass. Hans, who is buried in debt and has become a hardened alcoholic, is willing to sacrifice a few days to guide the two men through the hostile mountains. But when the authorities get wind of the scheme, they launch a wide-scale manhunt. Tracked, injured and cold, Hans will have to surpass himself to win the most difficult fight of his life.
———-

In the early 16th century, the Catholic Church was in a quandary. Against all doctrine, there were those who believed that the Word of God belonged to everyone, not just the elite who could read the Latin language in which the Bible was written. Further, it was outrageously believed that the Bible should be published more widely, giving an even broader range of people access to God’s word. These “Reformers” were considered rebels and heretics, and they threatened the Catholic Church’s control over the huddled masses. When that kind of change is on the horizon, bloody conflict isn’t far behind.

On a rainy day in 1534 Lord Hans Stalhaffer, the King’s own Sword Master, faces challenger Count Maleztraza in a duel that will determine whether he retains his title or passes it on. With a broadsword in his hand, the aging Sword Master is a force to be reckoned with. However, Count Maleztraza has his own ideas of how a duel should be fought, and he brings what many believed to be a dishonorable weapon, the rapier, into play. Where the broadsword is steady and strong, taking the discipline of many years to master, the rapier is fast and light and can be learned in a relatively short amount of time.

The duel comes to draw. Both men come away with some pretty horrendous physical scars, but Lord Stalhaffer feels the effects more deeply. The King, impressed with the utility of the rapier, has decreed that all formal duels will be fought with the lighter weapon from then on. Disgusted by the choice, Hans resigns his position and leaves an old life and position behind.

Four years later, Hans has found work in the country as a brute in the employ of petty, bordering on sadistic, member of the clergy. When the priest’s provincial parishioners fall behind on their mandated tithes, Hans is sent out to retrieve what’s owed. In many cases, he’s also told to serve up an example of what happens when God’s chosen representatives aren’t treated with the proper degrees of fear and respect. Broken legs are a small price to pay to stay in the good graces of the Church.

And then comes a day when Hans is approached by an old friend, formerly the King’s surgeon, and his young companion Casper. They’re on the run, carrying a blasphemous copy of the Bible’s New Testament, printed in French, and are trying to get to Sweden where a printer awaits to spread the Word. On their heels is a party, led by none other than the King’s Sword Master Count Maleztraza, determined to drag them both back to face the Church’s justice. When a group of hill dwellers get thrown into the mix, angered over trespassers in their territory, the three groups are sure to clash and Hans is forced to decide on which side he’ll stand.

Sword Master is great book, written and drawn in a very cinematic style. Reading it, I kept thinking that I’d love to see this as movie, even going so far as to do the casting in my head. It’s a brutally honest look into life at the dawn of the Renaissance, not a particularly shining moment for the Church. The action is visceral and bloody, just what you’d expect in a book that features so much swordplay, the way it really was and not the way we’ve seen it in old Errol Flynn movies. Limbs are lost, bowels are opened, and in the middle of it all is the running argument of honor versus expedience, truth versus faith, and knowledge versus control.

Writer Zavier Dorison and artist Joël Parnotte have worked together to craft an adventure story with a historical backdrop, and they’ve done it beautifully. Dorison populates the world with a cast of diverse characters, all with their own motivations, and none of them wholly right or wrong… except maybe for that Maleztraza guy. He’s an ass. Parnotte’s artwork complements Dorison’s story with detail and precision, even when it isn’t exactly pretty. The two put together are a match made in storytelling heaven, and deserve the respect and admiration of their peers.

It’s always great to see a book come out that doesn’t stick to the beaten path. Historical drama isn’t always a big draw, and when the scandal of the Reformation gets thrown in, feelings get hurt. It’s a bold statement to turn that setting into a story of survival and personal honor, and I think that in Sword Master, everyone involved did a great job. It may be a story that we’ve seen played out before, with the crusty old warrior dragged into a battle that he wanted no part of, for the sake of a philosophical argument in which he has no interest. But if it’s done right, those stories can still hit readers in the gut with their honesty, their wholly fleshed out characters, and a satisfying if more or less expected resolution.

Done in the spirit of films like The Outlaw Josey Wales and The Revenant, Sword Master should hold up as a solid story of will and personal integrity. And let’s be honest, who doesn’t like seeing the old warhorse kick the living hell out of a bunch of young wannabes? 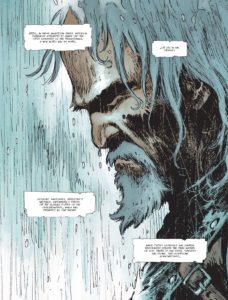 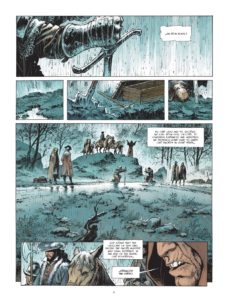 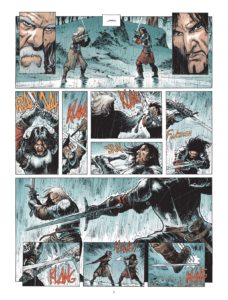