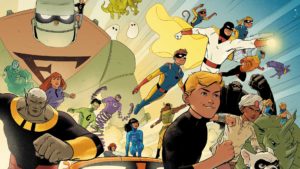 When the adventurous and inquisitive Jonny Quest and his adoptive brother Hadji make a startling discovery in the swamplands of Florida, they are pulled into an epic struggle between the Space Rangers and a dangerous villain who threatens the galaxy. Now it’s up to the combined forces of Team Quest, Inter-Nation Security, Space Ghost, and a host of Hanna-Barbera’s greatest action heroes to stop him and save their universe!

Don’t miss the start of this new, monthly series that features character designs by comics superstar Darwyn Cooke and kicks off with an extra-sized story and a wraparound cover!
———-

Anyone who ever spent their Saturday mornings jumping up to watch the slew of Hanna Barbera cartoons is going to want to pay attention to this title… Issue one opens with a desperate battle in deep space, as Captain Kyr of the Space Force leads a last ditch effort to stop an advancing evil of Omnikron. While the immediate threat is defeated, costing the lives of the Force’s general and nearly all of its officers, it was only a delay. With Kyr the last surviving member of the Space Force, it will only be a matter of time until Omnikron would once again make his presence known to the galaxy at large.

Fast forward several years, to the present day. Young adventurer and trouble seeker Jonny Quest is exploring the Florida Everglades with adoptive brother and best friend Hadji. With the help of man of action Race Bannon, team Quest is on the lookout for a strange and recurring phenomenon. Mysterious vortexes have been popping up with increasing regularity, their center seeming to be in the middle of the swamp. Some of the vortexes have emitted an unknown energy, while others have left behind rocks composed of no known elements. Dr. Benton Quest, recognizing the importance of these findings, has enlisted the aid of more than his son, Hadji, and Bannon. Ray Randall, aka “Birdman” (not the Michael Keaton one… totally different) and fellow Inter-Nation Security operative Deva Sumadi have been assigned by their superior Falcon 7, to consult with and assist Dr. Quest. No sooner do the Inter-Nation duo arrive at the Quest compound than another vortex opens, spitting out yet another mystery… an unidentified crashing object in roughly the shape of a spaceship, emitting a distress call and carrying multiple lifeforms.

Anyone familiar with the oft-resurrected character of Space Ghost from his stint as a talk show host (Space Ghost, Coast to Coast) on the Cartoon Network’s Adult Swim might be surprised to find out that he goes back a bit farther than that. Space Ghost first appeared in 1966 as part of the Hanna Barberra CBS series Space Ghost and Dino Boy. Since then, he’s been credited with kicking off the popularity of superhero cartoons, carrying over from the sixties, well into the seventies and beyond. Stemming from that first show, Space Ghost introduced other popular characters, such as the Herculoids and Teen Force.

One thing I was surprised to find in the opening of Future Quest issue #1 was what looks very much like an unknown, at least to me, origin of Space Ghost as none other than Captain Kyr of the now mostly deceased Space Force. It’s all there: the power bands that grant Space Ghost his power blasts and shield; the Space Force uniform that looks a lot like those worn by Space Ghost’s teen sidekicks Jan and Jayce; that strong square jawed look inherent in all Hanna Barbera heroes. Suffice to say, this was a pretty easy book for me to fall into. The addition of Birdman and Jonny Quest, as well as the promise of the future presence of the Herculoids and pretty much every other awesome Saturday morning cartoon character seen on the cover, was all nerdy icing on my fanboy cake.

The artwork and character designs by the team of Shaner, Rude, and Bellaire bring the old cartoons to life, paying tribute to their roots by not updating their designs while still managing to bring them into the modern world. That feat alone is one that should give these guys entry into whatever comic book hall of fame might be looking for entries. Add to that the scripting of Parker, breathing life into characters that are all-too familiar to a lot of fans, allowing them to be the heroes us old timers remember without losing anything to admittedly dated dialogue, brings the cumulative potential for nerdgasms from coast to coast.

All total, this book is a must-read for anyone looking to revisit old worlds of fantasy and adventure, as well as new fans who have any interest in seeing where some of the characters they think they know actually came from. 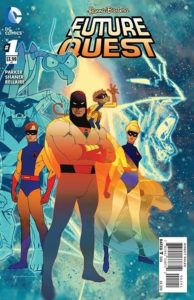 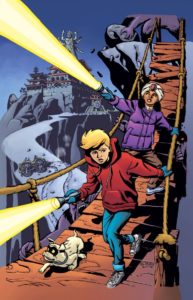 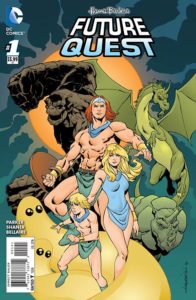