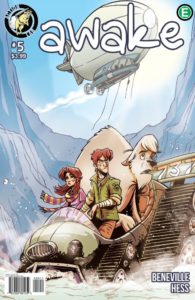 (from issue #1)Twelve year-old Regn has the power to wake and heal planets. But, on her first mission, she lands on Gremon where she discovers an angry planet tearing itself apart, an irresponsible big brother, and a greedy baron who stokes the chaos for his own benefit. Her power may not be enough when she comes face-to-face with the planet’s consciousness.

(issue #5) Betrayed by Gen, Chay and Bashi are prisoners in the Baron’s castle! Gremon may finally be at peace, but the sibling rivalry between Regn and Picar is just starting to erupt. Will they stop bickering long enough to battle their way through Gurk and an army of Brute Guardsmen? Don’t count on it.
———-

Five years ago, Picar arrived on the very troubled planet of Gremon. Being an outworlder, a Dola, Picar possessed powers beyond those of any of Gremon’s native inhabitants. It wasn’t until he was reunited with his sister Regn that the siblings were able to reach their potential. When their powers combined, the world of Gremon was bathed in a light that began a process of healing. Gremon’s resources, long stretched thin, were renewed, its damaged environment was repaired, and the people were able to look to the land as a source of nourishment and well-being again.

For the most part, this healing was received very well, with the exception of Gremon’s ruler, the Baron. If the people were able to fend for themselves, what leverage did he have to keep them in check? Now the Baron and his forces are hunting Regn and Picar, looking to get some payback for the disruption they’ve caused in the status quo. Their advantage is in the fact that they have Chay, close friend to Picar, and Regn’s kivit companion Bashi in custody. Now the Baron will wait for his enemies to show up for a rescue attempt.

Despite the traditional rules governing the Dola, that rescue attempt is an inevitability. Picar choses to free himself from the confines of those rules: “Stay only so long as needed, leave no trace, form no attachments.” Having just given an entire planet a much needed makeover, “leave no trace” is pretty much out the window. As for forming attachments and not hanging around past their time, Regn and Picar don’t have it in them to abandon their friends Chay and Bashi.

As often happens, the first four issues of Awake slipped past me, camouflaged in the shuffle of the comics given to me for review (“too many comic books to read” plants me firmly in the realm of “first world problems”, and should be a meme all on its own). Now that the folks at Action Lab have caught my attention, however, I’m determined to be a little more attentive to their section of the pond.

Awake is a pretty family friendly story, with artwork that struck me as almost Disney-esque. Some of the characters actually had me thinking about Chip and Dale’s Rescue Rangers, which as a parent was a way better alternative to Barney and Blue’s Clues. With themes of global renewal and loyalty to friends and family, containing very clearly delineated lines between the good guys and the bad (all that was missing was the appropriately colored hats), Awake would be a great addition to the bedtime reading rotation. I think everyone involved would be more than satisfied.

Now I’m gonna go and see what else I’ve been missing from Action Lab. I would recommend that you do the same. Everything that shines is not DC or Marvel (or Image, Valiant, or Dark Horse), so take a chance. You might be shocked at what you’ve been missing. 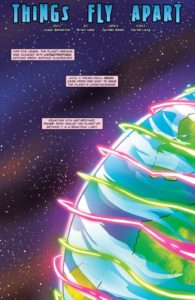 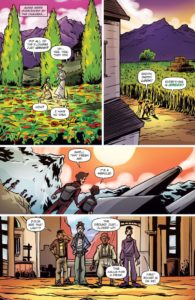 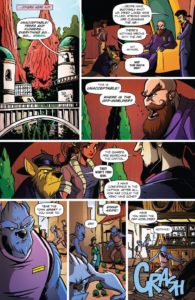