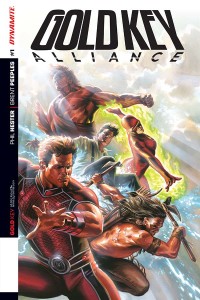 The legendary heroes whose adventures have thrilled comic book readers for over half a century are back, only this time they all share the same time and the same world – ours! In this breakneck first issue, each warrior wrestles with the perils of the twenty-first century, but a greater evil is approaching, one that will unify the legendary champions in a struggle that will change each forever.

Phil Hester has done an amazing job taking four characters that have been bounced around more than a couple of comics companies, pulling them out of the future as envisioned by the 1960’s creators, and made them viable characters you might see in this millennium. He made Magnus more “Agent for Hire,” Dr. Solar now the Woman of the Atom, Turok a native American wildlife marshal and star of his own reality show, and Samson….well, he’s just nuts. When you look back at what they were before this reboot, all of them seem not as “far out” as their original versions, and this is a very good thing.

The art by Brent Peeples is indicative of the “this is a real-life drama” kind of art favored in many Dynamite books, engaging and full of action. The main characters are clearly defined and each have their own energy, whether in motion or still. The colors by Hickman also seem to be a product of real life – blues, purples and greys for a night scene; bright colors for an interior scene – which fit the realistic scenes very well.

Looking forward to issue #2, when the real adventure begins!