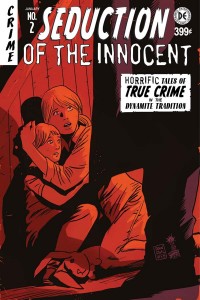 San Francisco, 1953. F.B.I. Agent Thomas Jennings has been in town all of forty-eight hours. He’s been stabbed, chased, and betrayed, witnessing more horrors than he ever could have imagined. Now, in a desperate race to find two abandoned children in the vast jungle of the city, Jennings struggles to hold onto his own humanity, his own… innocence. Tough, relentless crime storytelling in the tradition of Jim Thompson and James Ellroy, from the team that brought you The Death of Zorro and The Lone Ranger.
———-

“Horrific tales of True Crime in the Dynamite Tradition.”

The year is 1953, the city is San Francisco. Young FBI Agent Thomas Jennings has just transferred from the Cleveland office, and has found himself right in the middle of a string of murders targeting the high ranking members of the local crime syndicates. In the first issue of the series, Boss Johnny Lanza and his wife were the targets of grisly violence. Their young children, Cindy and Tommy, were able to escape the house and make a call to the police.

This was the first time the FBI team assigned to the killings have been able to respond so fast, and Jennings gets there just in time to spot the killers making their getaway. With a fresh crime scene, the investigation seems to be opening up. The priorities are to find the missing Lanza children, and to start tearing the area apart for clues the perpetrators might have left behind in their hasty exit. Being the new guy, Jennings is given the task of tracking down the children. Can he find them before the killers do?

As far as crime stories go, this one has it all… brutally violent murder scenes, an idealistic FBI Agent faced with the cynicism of his peers, and killers with a purpose that goes much deeper than simple bloodshed. As a reader, I generally don’t look for gritty realism… I get enough of that every day… but Seduction of the Innocent is a well-written, well-drawn, and fast paced story in the spirit of The Untouchables and the pulps of old. Even the cover of the books are done in a retro “Tales of True Crime” style right out of the fifties. The dialogue by Ande Parks is sharp, each character being given their own “voice”. The artwork by Esteve Polls moves across the page very well. The action is dynamic and easily followed, mostly avoiding one of the pitfalls I’ve noticed about more “realistic” comics, the tendency to step too far away from the typical comic book style and into a very stiff looking type of drawing.

Fans of true crime, people looking for something a little outside of the capes and tights wheelhouse, anyone just looking for a solid read, should give Seduction of the Innocent a look. Also, the irony of the series’s title being taken from the book that tried to have comic books banned as the source of all that’s wrong with our children back in the fifties might get a chuckle. Bottom line, Dynamite continues to put out some very good pulp adventure comics, now adding crime stories to its resume’.