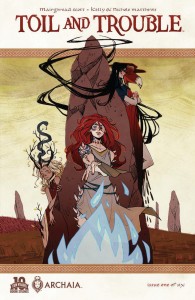 Toil and Trouble (1 of 6)
Boom! Studios
Created and Written by Mairghread Scott
Illustrated by Kelly and Nichole Matthews
Letters by Warren Montgomery

Throw out your textbooks, this is not the Macbeth you remember. Mairghread Scott (Transformers: Windblade) and Kyla Vanderklugt (Jim Henson’s The Storyteller: Witches) have reinvented Shakespeare’s famous tragedy, but this time the power is in the hands of the three witches. These ladies aren’t all “double, double, toil and trouble.” They’re the power controlling kings and the fate of Scotland.

The three fates-Riata, Cait, and Smertae-have always been guiding and protecting Scotland unseen, indirectly controlling the line of kings according to the old religion. When there is a disagreement in the sisterhood, Riata and Smertae will use men as pawns, and Smertae will direct Macbeth to a crown he was never meant to have.
———-

This is the story of three sisters, the Three Fates of legend who watched over Scotland and guided the path of her sons and daughters, while being careful to never interfere directly. Most of the time…

Smertae has different ideas. She feels that when Fate’s plan is an unjust one, and goes against mortals deserving of a better outcome, someone should step forward to balance the scales. Such was the case nine years ago when she acted against her sisters, Riata and Cait, and refused to destroy the young thane MacBeth. Now, returning from her subsequent exile, Smertae is again given the task of ensuring MacBeth’s demise. Like a ghost, she enters his tent and lays on his armor, his body, and his mind, three curses meant to rush MacBeth along to his death in battle against the invading forces from Norway.

So, has anyone else out there read Shakespeare? Sure, it’s a little tough to get the hang of at first, but I gotta tell you, once you’ve got the language down, the stories have every element of every genre you can think of. Now, The Scottish Play has been done, done again, and is about to see another incarnation starring Michael Fassbender (you know, the guy who played young Magneto). His story has been told many times, and may be as familiar to the readers as that of Spiderman (what, another reboot?).

Good news! This isn’t MacBeth’s story! No, sir, this comic brings us the same story, from the perspective of the witch, Smertae. She’s different from her sisters in that she doesn’t believe the mortals are just irrelevant pawns in the bigger picture that is Scotland. She has more compassion for them, and for MacBeth in particular. In her first mission to take him out of the picture, Smertae posed as nurse to the thane’s young son. Apparently, getting that close to her intended target didn’t help her stay on target, and for her compassion she was banished from Scotland for nine years.

Smertae’s back, and once again her sister Riata has given her the mission of ensuring MacBeth’s demise… Will things be different this time around? Will Smertae be able to fulfill her duty to her sisters and to Scotland? Will the Bard himself make an appearance to cry “FOUL!” on this work?

I don’t think so on that last bit… It’s actually pretty cool, and definitely no more of a smudge on the works of William than the Kill Shakespeare series. 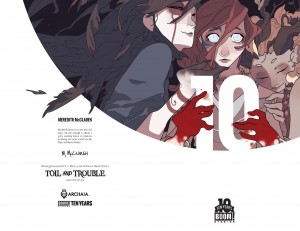 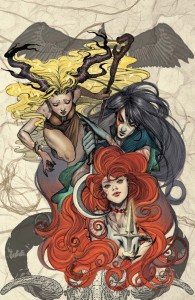 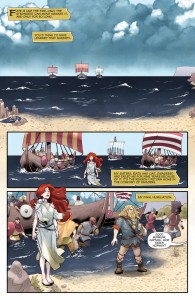 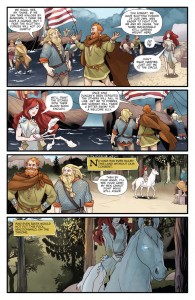 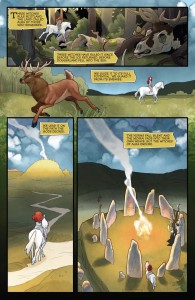 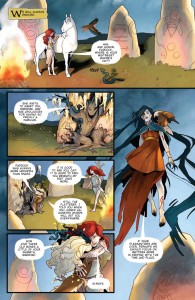 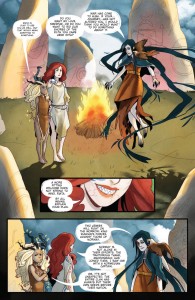