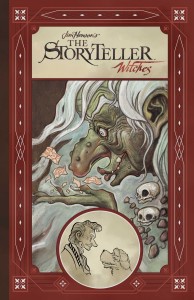 JIm Henson’s Storyteller: Witches HC (BOOM!)
Jim Henson’s The Storyteller is a beloved celebration of fairy tales and folklore. After releasing a critically acclaimed graphic novel we’re thrilled to share more of The Storyteller’s magic. In the spirit of Henson’s inventive imagination, this hardcover collects four stories of witches and witchcraft from all over the world. Each story is told by different a different writer and artist, exploring classic witch stories and fairy tales through an incredible blend of art styles and storytelling techniques, and taking full advantage of the visual medium.

Collected into a single hardcover volume, here are four issues of Archaia’s series dedicated to those oft maligned and misunderstood stealers of children and souls… Witches. Each story stands on its own, taking a very different approach in both art and writing. Overall, the artwork in this book is fantastic, cover to cover. The stories told are all taken straight out of folklore, covering different cultures and their spin on witches.

In The Magic Swan Goose & the Lord of the Forrest (by S. M. Vidaurri), a princess tries to win the aid of the Lord of the Forrest as she looks for her kidnapped brother. Honestly, this was the toughest story for me to get into, mostly due to the style in the narrative… not the writing itself, just the way it was presented. The artwork was great, reminding me a lot of some anime features I’ve seen.

The Snow Witch (by Kyla Vanderklugt) is story out of Japanese folklore, about the Yuki Onna (“Snow Woman”). All of the classic fairytale elements are here… broken promises, true love, shape shifting, and good intentions gone wrong.

The Phantom Isle (by Matthew Dow Smith) is a tale about the power of stories. A young sailor finds his way to a magical island that has been known throughout the ages by many names: Avalon, Atlantis, Tir Na Nog to name a few. His imagination awakens something that the island had lost, and he discovers that telling stories carries more responsibility than he’d thought.

Vasilissa the Beautiful (by Jeff Stokely) is a story taken from the script for an un-produced episode of Jim Henson’s television series, from which this whole comic series is inspired. Vasilissa is a young girl caught up in a classic “Cinderella” story, complete with a wicked step mother and her shrewish daughters. The difference here is that instead of a fairy godmother, poor little Vasilissa gets stuck with the forest witch Baba Yaga.

This is a great book for anyone who really misses the creativity of Jim Henson. From the Muppets to the Dark Crystal, to Master Yoda himself, Henson’s imagination left a pretty deep footprint that has yet to be filled back in.