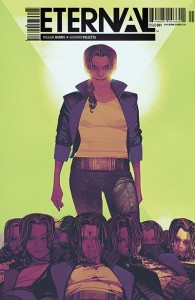 WHAT IT’S ABOUT: In a world of clones, the Human Liberation Army wants to free people from New Life’s grasp. Their leader Gail will take the most drastic, personal measures yet to do so. Rathmann, a former homicide detective turned New Life enforcer, is on the case, and is asking tough questions. Violet, a young girl and one of the few non-cloned humans (Pures, they’re called) left, is longing to enter the real world. But she has no idea the danger she is stepping into.
—————–

2270. It’s a great time to be alive. Death isn’t the specter hanging over us anymore, because when we go, we just pick up in a fresh new clone body. All of our thoughts and memories uploaded, and before you know it, you’re picking right up where you left off. That is, if you’re lucky enough to actually be cloned. If you’re one of the unfortunate “pures”, the people whose genetic material hasn’t been tapped yet, you’re life looks pretty dismal. The Human Liberation Front, and their driven leader Gail, are the only ones willing to take the steps needed to bring the truth to light.

The first issue is introducing us to futuristic society that seems to have solved many of our problems, and in the process created a whole slew of new ones. Things more along pretty fast, and there really isn’t a lot of time to settle into the story of one group before we’re yanked off to the next. The story is interesting, and should find an audience among the fans of Dystopian sci-fi. It might just take a time to catch up with everything that’s going on.