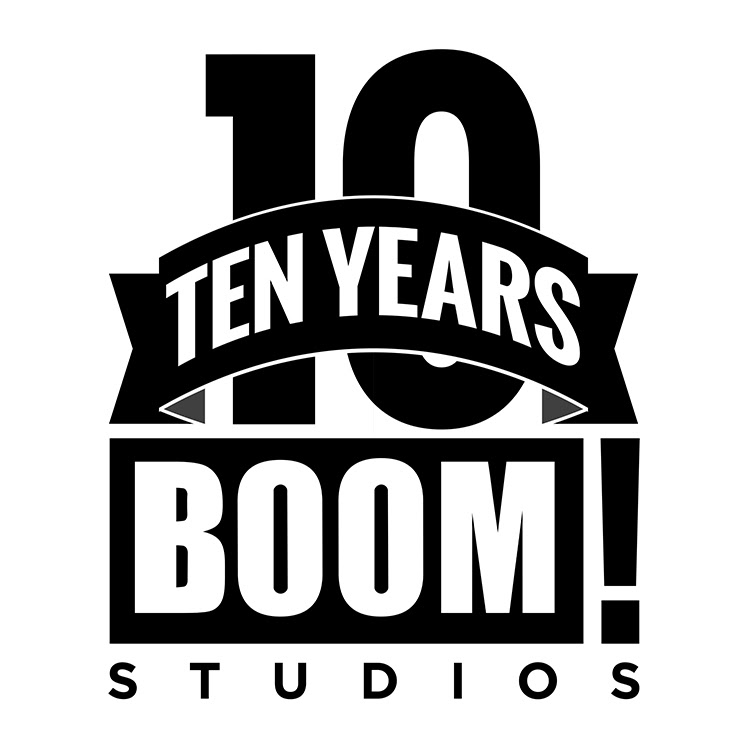 In 2015, BOOM! Studios turns 10 years old, and to celebrate this milestone anniversary, the award-winning publisher is excited to announce a yearlong cover strategy starting in January designed to spotlight all of its new launches and reward many lucky retailers and fans. Every launching issue in 2015 will include a uniquely designed “10 Years” incentive variant cover featuring work by one of 16 of the industry’s best cover artists. Each artist (or artist team) will provide all the covers to all of the newest titles coming out from BOOM! or one of its imprints (KaBOOM!, Archaia, and BOOM! Box), with the roster rotating each quarter. The special “10 Years” covers will be retailer incentives available to order for retailers for every 10 copies they order of the title’s main cover.

For the first quarter of 2015 (January-March), the artists are:

Cover artists for the remaining quarters of 2015 will be announced at a later date.

In January, new launching titles to receive the “10 Years” Cover treatment include:

The cover images will be revealed closer to each title’s order deadline.

In addition, BOOM! will select one launching title each month and slip one, rare exclusive cover intermixed into every 100 copies of the main cover printed. Dubbed the Jackpot Variant, these special covers will show up randomly at any comic shop that orders at least one copy of the title. For January, that title is Munchkin #1, a new ongoing series from BOOM! Box based on the hit adventure card game. The Jackpot Variant cover for Munchkin #1 is illustrated by Evan Palmer (Cooking with Food).

Finally, should any of its new titles in 2015 launch with a final combined initial order of over 10,000 copies, BOOM! will unlock an additional 1-in-10 intermixed special variant that will ship with the main cover.

To help mark its 10th anniversary, BOOM! will include a new “10 Years” trade dress logo that will be featured on the covers of all its single-issue releases in 2015.

“We’re very proud to reach our 10th anniversary here at BOOM! Studios, so to celebrate, we wanted to make sure we included the people that helped us get where we are today: comics retailers and fans,” said BOOM! Studios Editor-in-Chief Matt Gagnon. “This yearlong program brings in some of the best artists in the industry and is designed to celebrate this milestone with all of our supporters. I can speak for our entire team when I say we’re looking forward to the next 10 years of publishing great comics!”