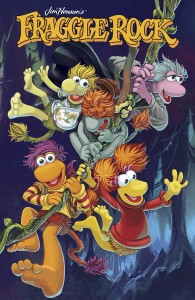 How did I end up in Fraggle Rock?  Good question… Call it a little bit of nostalgia for the good ole days when Jim Henson’s creations were a pretty constant source of entertainment.  I’ll get back to the blowing up stuff soon enough…  But first, here’s a book to check out if you’re looking to get some younger kids involved in “reading time”.  It’s simple, it’s fun, there’s rhymes and stuff.  And Fraggles.  Lots of Fraggles.

You remember Fraggles, right?  They were Jim Henson’s children’s program after the Muppet Show.  It was about a bunch of underground creatures who were all about sharing and caring and fun and playtime and… whew, it’s exhausting just writing about it all.

So we start with Gobo who’s looking for something to invent… The problem is that he doesn’t really know what he wants to make. He goes to his friends- Wembley, Mokey, Boober, and Red- to see if they have anything that needs to be invented.  Problem number two for poor bored Gobo is that Fraggles are pretty content, and don’t have much need for Bigger and Better Things.

Until… (ominous music) Gobo and company discover that all of the water in Fraggle Rock has been completely dried up!

The only place that anyone can think of to find water is (more ominous music) the Everspring, deep beneath Fraggle Rock, where no one has gone since before anyone can remember.  Gobo and friends pack for an adventure and set out to face the danger and mystery that awaits.