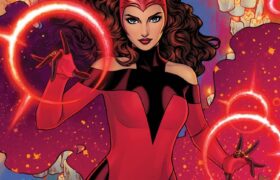 The Scarlet Witch will return in January in a brand-new ongoing solo series! A groundbreaking new chapter for one of Marvel Comics’ most beloved characters, SCARLET WITCH will be written by Steve Orlando, known for his thrilling current run of Marauders and last year’s Darkhold saga, and drawn by artist Sara Pichelli, the superstar talent known for her acclaimed […]

Witchcraft is broken. And the Scarlet Witch is the only one who can fix it. Her globetrotting quest to repair the magical forces across the Marvel Universe begins this December in SCARLET WITCH #1! Eisner Award winning writer James Robinson is joined by a rotating crew of some of the industry’s hottest creators including Vanesa […]