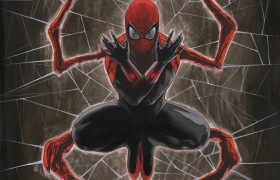 This December, Otto Octavius will leave the moniker of Doctor Octopus behind…and forever become THE SUPERIOR SPIDER-MAN! The new ongoing series will be penned by Christos Gage (Spider-Geddon) with art by Mike Hawthorne (Deadpool), a collaboration that will also mark a renewal of Hawthorne’s Marvel exclusive. “I’m more than thrilled to renew my exclusive with […]

And lo’ there came a day unlike any other, in February of 1991, when merc and mouth united for a common goal. And on that day, Deadpool was born! Now, a mere quarter of a century later, we’re celebrating Deadpool’s 25th Anniversary this February in the colossal sized DEADPOOL #7! That’s right – that same regenerating degenerate […]