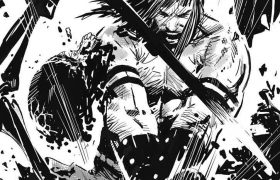 By Crom! This October, Marvel is proud to bring you the saga of the death cult of Koga Thun, presented for the first time in stunning black and white! Bringing the famed sword-and sorcery epic to life through brutally sharp storytelling, Ron Garney’s epic inked pages take an extra-special spotlight in this brand-new trade paperback […] 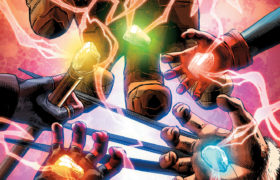 With a CRASH and a BANG, the cosmic strike of the Countdown begins as the greatest epic in the history of the Infinity Stones explodes onto the pages of INFINITY COUNTDOWN! And it’s a beginning so huge, it can only be told in one sweeping, mind-bending tale. This March, Gerry Duggan (All-New Guardians of the […]

There’s something amiss with Deadpool’s marital bliss! And a domestic dispute as unpredictable as Deadpool himself could spell grave consequences for the entire world! Today, Marvel is pleased to present your first look inside DEADPOOL #28 – the first chapter of ‘Til Death Do Us… Writer Gerry Duggan continues his sweeping Deadpool saga alongside artist […]

This October, the Merc With a Mouth is crashing headlong into Marvel NOW! and he’s bringing William Shakespeare with him! Today, Marvel is pleased to present your first look inside DEADPOOL #21 – the colossal 80 page issue coming to comic shops and digital devices on October 26th! First up, witness the the return of […]

What do you get when you take a Merc With a Mouth, two Heroes for Hire and a Man Without Fear and mash ‘em together?  Why, the massively oversized DEADPOOL #13 of course!  This June, this quartet of heroes collide in the first-ever 4-part crossover in one issue! We’re not joking – this issue contains […]

And lo’ there came a day unlike any other, in February of 1991, when merc and mouth united for a common goal. And on that day, Deadpool was born! Now, a mere quarter of a century later, we’re celebrating Deadpool’s 25th Anniversary this February in the colossal sized DEADPOOL #7! That’s right – that same regenerating degenerate […]

This October, the no-holds-barred antics of the Marvel Universe’s most unlikely duo continue in HAWKEYE VS. DEADPOOL #1 – the official first issue of the blockbuster comic event of the fall. Even though this is really the second issue, but who’s counting? Gerry Duggan and Matteo Lolli return for the battle of the century (maybe) as the Merc with […]

The 90’s – a simpler time. When the action was extreme and pouches were really in style. Today, Marvel is proud to present your first 90s fueled look at DEADPOOL #34 – a tie-in to Original Sin! Chart topping writers Brian Posehn & Gerry Duggan along with artist Scott Koblish bring the truth about Deadpool’s past to […]

This September, the Avenging Archer takes on the Merc With a Mouth in a confrontation for the history books in HAWKEYE VS. DEADPOOL #0 – the first issue in a new limited series from critically-acclaimed Deadpool scribe Gerry Duggan and artist Matteo Lolli! This is the Hawkeye & Deadpool comic 75 years in the making! Give or take 75 […]

You saw Deadpool’s marriage to the succubus queen Shiklah. Now experience their first meeting and romance this July as the hit Infinite Comic makes the leap to print in DEADPOOL: DRACULA’S GAUNTLET #1 – coming to you from critically acclaimed Deadpool writers Gerry Duggan & Brian Posehn and fan-favorite artist Reilly Brown! When Deadpool is […]