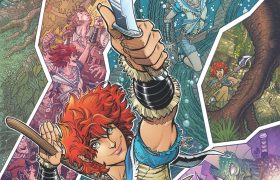 From the creative team of writer John Layman (Chew, Detective Comics) and artist Nick Bradshaw (Wolverine and the X-Men, Fantastic Four) comes Bermuda, a four-issue comic book series of island dangers, dark magicians, and strange monsters! In anticipation of July’s #1 issue debut, IDW is proud to debut a scene from this action-packed miniseries for […] 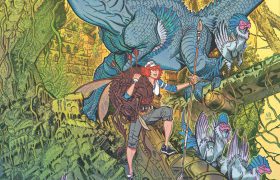 IDW Publishing announces that John Layman, award-winning creator of the New York Times bestselling Chew series, and superstar artist Nick Bradshaw (Wolverine and the X-Men) will debut a new creator-owned comic book series in 2020, entitled Bermuda. “Bermuda is a story that’s been rattling around in my head for a while, and the type of book […]

Today, he’s the world’s greatest super hero. But long before he swung from rooftops as the Amazing Spider-Man, he was a super powered teenager who knew that “with great power must also come great responsibility.” Today, Marvel is pleased to present your new look inside SPIDEY #1 – the new ongoing series from fan-favorite writer […]

Love the Old School Electric Company Font on the the cover :)! Today, he’s the world’s greatest super hero. But long before he swung from rooftops as the Amazing Spider-Man, he was just a spider-powered teenager who knew that “with great power must also come great responsibility.” Today, Marvel is pleased to announce SPIDEY #1 – a […]

This November, the Guardians of the Galaxy face their worst nightmare as the new “Planet of the Symbiotes” arc kicks off in GUARDIANS OF THE GALAXY #21! Comic book superstar Brian Michael Bendis and Marvel Young Gun artist Valerio Schiti venture where no heroes have ever gone before – to the home planet of the deadly […]

His death was only the start! Wolverine may be dead, but his legacy lives on. Spinning directly out of Death of Wolverine, The Weapon X Program and The Logan Legacy comes WOLVERINES #1, a brand new weekly series beginning this January! The friends and foes he left behind unite as they seek to uncover the […]