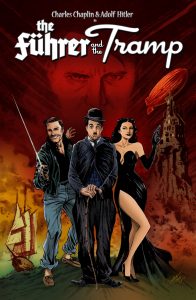 Charlie Chaplin – comic, filmmaker, and raconteur – didn’t become the world’s biggest star by courting controversy, but when he comes face-to-face with the horrors of Hitler, he feels compelled to get off the sidelines and get involved. And then Charlie is approached by FDR himself with a special assignment. His mission, if he chooses to accept it: create a propaganda film to drum up public support for joining the war in Europe.

And so Charlie goes from movie maker to provocateur, traveling the world and dodging danger to complete his film. With the help of undercover agent Hedy Lamarr, her handler Errol Flynn, and British patriot Alfred Hitchcock, Chaplin faces down American fascists, Nazi spies, and his own massive self-doubt to complete his masterpiece.

But just because the film is done doesn’t mean the mission is, and little tramp and great dictator go toe-to-toe, Charlie and Adolph, one-on-one, mano a mano in a rip-roaring climax that fully delivers on the promise of the premise.
———-

As is very often the case, this story starts off with a case of mistaken identity, followed by a merry romp as goose-stepping thugs chase down a hapless victim. I say “hapless” but by no means does that mean helpless. This time their quarry is no mere rabbit to fall quietly before the wolf of the Reich. Through cunning and ingenuity, the outnumbered but certainly not outclassed target of the German soldiers’ ire will outwit and outmaneuver his foes. On this day in Berlin, Germany, the year is 1939 and the Nazis have met their match.

On this day, Adolph Hitler himself will come face to face with… Charlie Chaplin.

Hold on… are we actually supposed to believe that this webcomic is about a battle of wits, and eventually fisticuffs (just check out that cover for issue 5), between Hitler and Charlie “the Little Tramp” Chaplin? And are we also to believe that Chaplin will be aided by Hedy Lamarr and Errol Flynn, who are both secretly working for the Allies as top level undercover agents? That has got to be one of the most ridiculous, most outlandish, most ludicrous concepts for an action/espionage comic in the history of ludicrous action/espionage comics.

And lemme tell ya, folks… against all odds, it works!

This is a labor of love that was sent to thePullbox by co-creator/writer Sean McArdle. He had some very kind things to say about our little blog, and wanted to know how to go about getting some buzz put out into the world for this webcomic, the collaborative effort of Jon Judy, Dexter Wee, and himself. Getting someone to read The Fuhrer & the Tramp is the easy part. Hell, I’ve read some pretty bizarre stuff (Bigfoot on Mars, Six Gun Gorilla, & Herald: the Adventures of Nicola Tesla & H.P. Lovecraft to name a few) and am pretty much game to give anything a try.

In the words of its creators, this story is an homage to classic tales of the Everyman thrown into extraordinary circumstances to discover that he’s capable of extraordinary things. On their website, they cite some of the movies by Jackie Chan, whose genius for physical comedy was in turn inspired by the likes of Charlie Chaplin and Buster Keaton, as some of the influences in their work. While at first preposterous to think that a trio of actors- a comedian, a starlet, and a swashbuckling icon- could go toe to jackbooted toe against Hitler and his forces of evil, it starts to make a little more sense if you do a little reading.

Charlie Chaplin was one of the early masters of physical comedy, choreographing and performing all of his own stunts well before the idea of CGI was even a glimmer in George Lucas’s eye. His on-screen antics may play to his character’s reliance on luck and happenstance, but can also give testament to a mind that has mastered the tactic of using an opponent’s strength and arrogance against them. Hedy Lemarr, far from the average Hollywood diva, had a fierce intellect and was quoted as saying “Anyone can be glamorous. All you have to do is stand still and look stupid.” Miss Lamarr was also an inventor ahead of her time, and has a patent to her name for a concept that eventually became essential to the cell phone industry. Errol Flynn… well there have been many thoughts and opinions about the much maligned actor’s off screen behavior (many of them wholly justified by all accounts), but what better cover for a covert agent than that of the lecherous drunken fop with delusions of grandeur?

While none of this may totally suspend a reader’s disbelief, it does lend a little more credibility to The Fuhrer & the Tramp’s concept. Then again, we are all readers of comicbooks, aren’t we? We regularly read about the adventures of flying people whose true life identities are obscured by the wearing of eyeglasses. Who are we to doubt?

So as a concept, this title probably isn’t as outlandish as we might have originally thought. But come on… how is it? In short, this was one of my favorite reads, my favorite titles, and I hope to have a hardcopy of it sitting on my bookshelf sometime in the future. McArdle & Judy have hit what I thought was a perfect balance between the serious and the slapstick as they carry Charlie through a crisis of faith. The story starts as Chaplin is recruited by none other than Franklin D. Roosevelt, to forgo his next comedic masterpiece in favor of film that could challenge the world to rise up against fascism. While at first Charlie is reluctant to step out of his wheelhouse of farce into the realm of propaganda and politics, he eventually sees that playing it safe was never what he was about (look up the speech from “The Great Dictator” on YouTube). And then he dumps a bottle of iodine into the President’s lap and overturns his wheelchair trying to mop it up, all while standing before the leader of the Free World without a stitch of clothing on. Hilarity ensues.

Given that Chaplin’s focus was always on silent film- he believed that “talkies” were too limited and that silent films had universal appeal without the need for translation- and physical comedy, the art for this kind of story would have to embrace the chaos in order to capture the spirit. Dexter Wee has done that very thing, to a tee. I would be hard pressed to find any real criticism of Wee’s work here, as it does an outstanding job of showing the action and the timing of the comic beats. Further, his work in capturing the features of the very well-known characters peppered throughout the comic is very impressive- in addition to those already listed, keep an eye out for the likes of John Pertwee (Doctor Who), Christopher Lee, Josephine Baker, and Alfred Hitchcock.

While this review may have gone on a little longer than my norm, I hope that speaks to the enthusiasm with which I’m approaching this story. The Fuhrer & the Tramp is available for immediate reading in webcomic form, and I’m going to be looking for it in print form, or in any other way I can get it. This is an awesome and entertaining read from start to finish, and should be on anybody’s list of titles to check out. And if it piques the curiosity enough to cause a reader to look up some of the people and events that inspired it, readers may find that the reality behind the fiction is every bit as interesting. 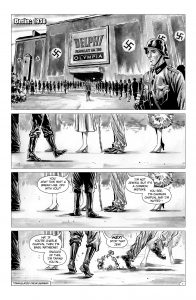 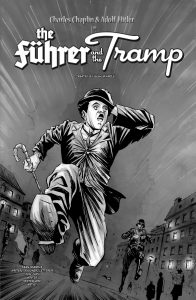 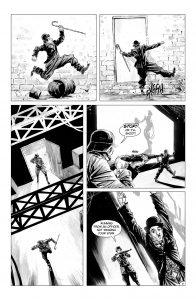 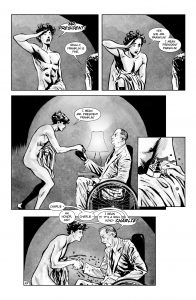 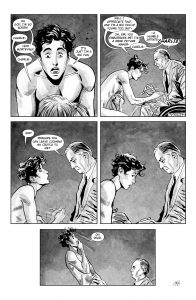 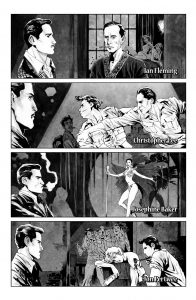 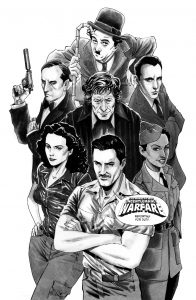 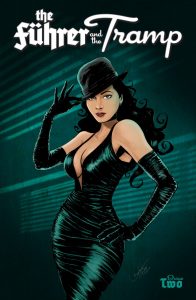 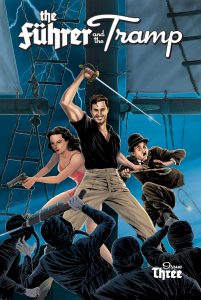 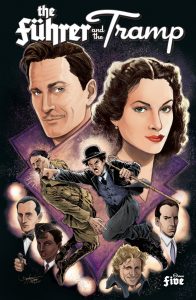