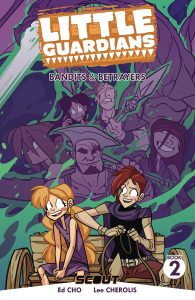 When a strange spirit panther starts following Subira around, she realizes she may be more than just the local shop girl. Subira yearns to accompany Soma in pursuit of a summoning orb but wild bandits have made the roads treacherous to unsuspecting travelers. Soma assures her parents the two ladies will be perfectly fine traveling alone. Maybe she knows something they don’t. Meanwhile Voss, a visiting guardian, and his overachieving son interrupt Tane and Idem’s afternoon training session. They are surprised to learn Idem has not heard the famous story of his father and the spirit dragon. After much cajoling, Tane recounts this perilous tale from his youth. Combining humor with big adventure, Little Guardians is a fun-filled all-ages romp!
———-

Life as a Guardian, or the son of a Guardian, isn’t all fun and games. It can be a dangerous calling, full of rampaging spirits of all shapes and sizes. But it’s a calling that can’t be denied, passed from father to son for as long as written history can recall. Young Idem has discovered that it’s a birthright that takes a lot of work to live up to, and he isn’t always sure that it’s the right thing for him. For what it’s worth, his father Tane, Guardian of Yowzah Village, has had his share of doubts as well. Sometimes it’s almost like Idem isn’t even really his son, but was switched at birth or something…

You know what else isn’t a lot of fun? No, not being stuck in a town known far and wide for its superior zucchini, where zucchini is the staple food day in and day out. Being the daughter of an item shop owner, that’s what. Subira understands this. It’s almost like she was meant to be something… someone… else. Like maybe she was switched at birth or something, you know?

I think I read somewhere that nothing is set in stone, that there’s no fate but what you make… maybe it was a movie, I dunno. Anyway, this review has nothing to do with movies, fate, and only a little to do with zucchini, maybe if it was sautéed up and seasoned really nice. What we’re really here to talk about, though, is the second installment in the Little Guardians series from Scout Comics, and I gotta tell ya that it’s more fun than a steady diet of Lembas Instant Noodles (read the book, it’s a thing).

Ed Cho has tapped into something kinda cool, here. He’s managed to put together a story that’s suitable for pretty much any age, boys and girls, but probably not for albino gibbons… Not because the story is anti-gibbon in any way, it’s just that gibbons don’t generally read. What I’m trying to say is that Little Guardians is written for the inner child in everyone. It’s full of fun characters, some of whom may not stick around for very long but generally manage to keep things entertaining, and surprisingly quick humor. Laughs aren’t always easy to pull out of a comicbook, especially for an adult reading an “all ages” comic, but Cho manages it on a pretty regular basis. And while he’s working the funny into his story, he’s still managing to instill a sense of purpose underneath it all, not just going for mindless whacky hijinks with no substance. It’s a pretty impressive balancing act, and Little Guardians would be worth a look based on that alone.

But it’s not just that alone that made this book extremely readable for me. The artwork by Lee Cherolis, with color duties bouncing between Dan Tincher and Jose Vazquez in between issues, is sharp and filled to the brim with whimsy. Yeah, I said it… it’s pretty darn whimsical, and I meant it. Nothing is too dark or sinister- even the dark and sinister things. The action is clear and easy to follow, with the whole thing carried along in a style that would be very well suited for animation. Another thing I was pretty impressed with was in the background characters… I mentioned before that there are people who are only in the book for a page or two, but were still well-written and interesting. That standard was picked up by Cho and carried over into the artwork. I didn’t get the impression that anyone was a “throw away”, but that everyone on the page was given their share of effort to bring the whole thing to life.

If I were looking for some kind of comparison, to give someone an idea of the kind of entertaining story Little Guardians is, I’d look to the animated series Avatar, the Last Airbender. This comic has a lot of that same quality, both in the writing and the artwork, and the end result is that it should be a very fun read for anyone still capable of having fun.

Not that there’s anything wrong with the fun-impaired… but maybe they should try reading this book. Couldn’t hurt, right? 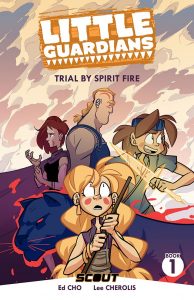 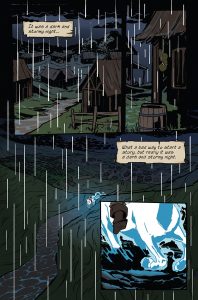 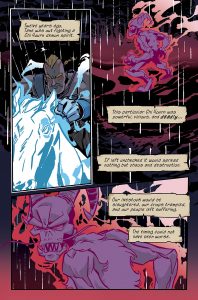 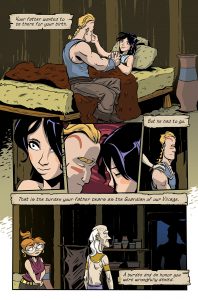