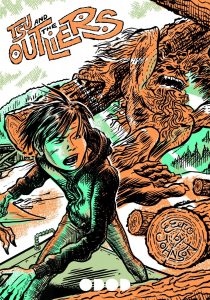 Mysterious bus crash, missing kids, creepy town in the middle of nowhere, bigfoot (kinda), chupacabra, what more could you want? “Outliers” centers around a non-verbal, bullied boy named Tsu, but Tsu can find his voice with big effects, helping him cope with an unbearable rural experience, which painfully permeates the whole book, but leads to a whole bunch of other complications.

I picked up “Outliers” because there was an earlier version of this that I remember coming out a couple of years back and copies were super hard to find and sold out everywhere, so I grabbed this one up quick. This might be better than the earlier version, the art is spectacularly retro, I read where someone compared the artwork to Gary Panter, but I think the art is more consistent than Panter’s and more polished, professional, but definitely old school brushy. I’m not sure there’s a style quite like it I can compare it too, maybe Paul Pope. There’s a dynamism to the art, and an occasional bit of unclarity, which for me, just added to the slightly eerie feel of the book. 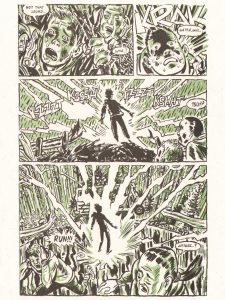 Johnson is a complete visual story-teller, he’s just as interested in capturing the loneliness of Tsu’s home life as he is in rendering a giant woodland creature, in fact I think the way he captured the settings and set the mood and tone is more of an accomplishment. 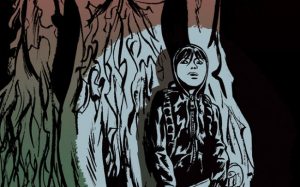 While the pictures reflected the story, what hooked me was the story.  I love way it dances around the edge of convention without ever giving into it. It’s a book that doesn’t really bother adhering to norms, but in a Jack Kirby sort of way, unafraid to be a bit unconventional. There is still recognizable mythology here, still a connection to the ‘norms’ which are sort of milling about the valley below, but this story is wandering in the rare air of the wooded hillside above.

The story telling is a bit Miyazaki-esque actually, sort of rambles around a bit, can’t really tell who is a good-guy or a bad-guy right away, with some nice, life-affirming table turning at the end.

There no major, obvious, clichéd beats or “cathartic” moments as one reviewer puts it, but it’s precisely this slightly odd story-telling technique that helps creates its eerie atmosphere. Johnson side steps the 3 part plot in favor of something more naturalistic; sometimes you can’t think of the ‘right’ thing to say at the right time, sometimes you just get steamrolled by a situation and have to move on. This story is driven by characters in situations, not tired plot tricks, and this is a story about worth and loyalty.

The Loyalty and sacrifice from both Tsu and his Mother comes from a place deep in the heart.  Tsu’s poignant lonely resilience and his surprising, inherent ability to deal with his situation(s) make this a book worth taking notice of. This is a great book for adults who love the graphic novel, but I think it has a special message for tweeners and early high schoolers.

Outliers is new and fresh and skipped along at a fast clip. It was over too soon for my tastes. It is a first chapter I believe, so be prepared to have many questions unanswered, and the mystery preserved, hopefully for future stories.

I would also recommend looking for the first incarnation of Outliers which Mr. Johsnson put out in comic book form in 2013, if you can find it. 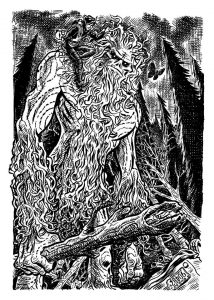