When tragedy strikes at the center of her world, Remi is forced to leave behind everything she holds dear in order to discover the truth behind her life’s upheaval—all while escaping the near infinite resources of the ruling clerics of faith that seek to not only bring her to justice—but end all traces of her existence! 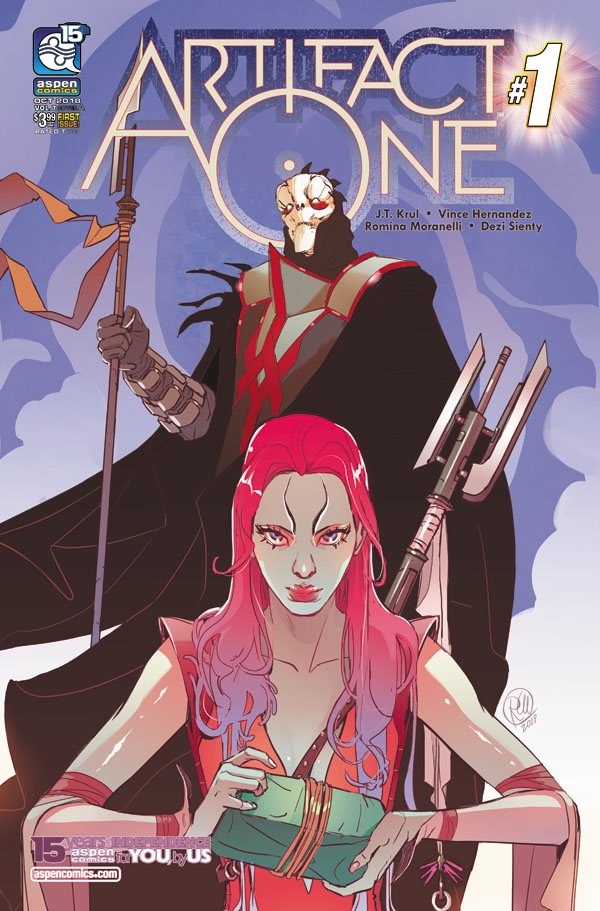 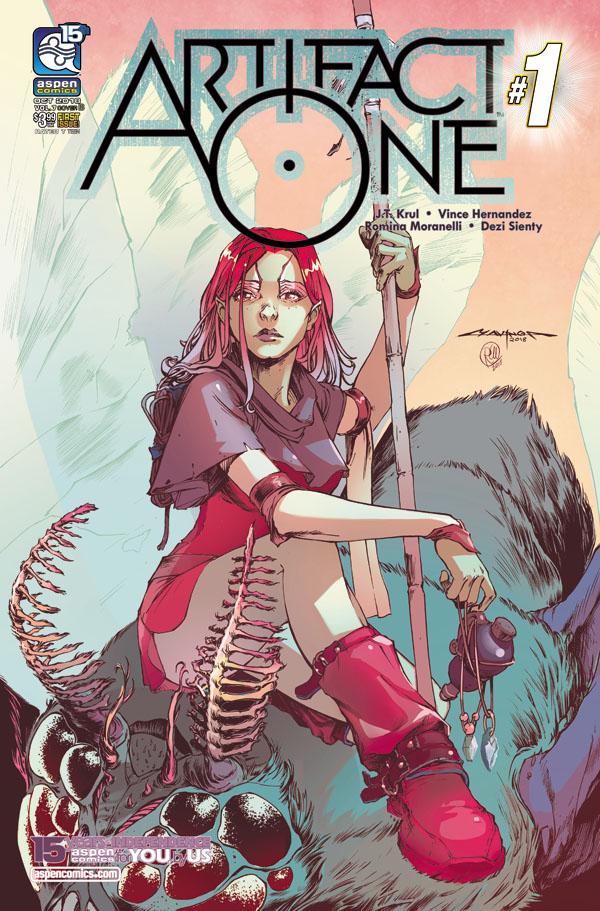 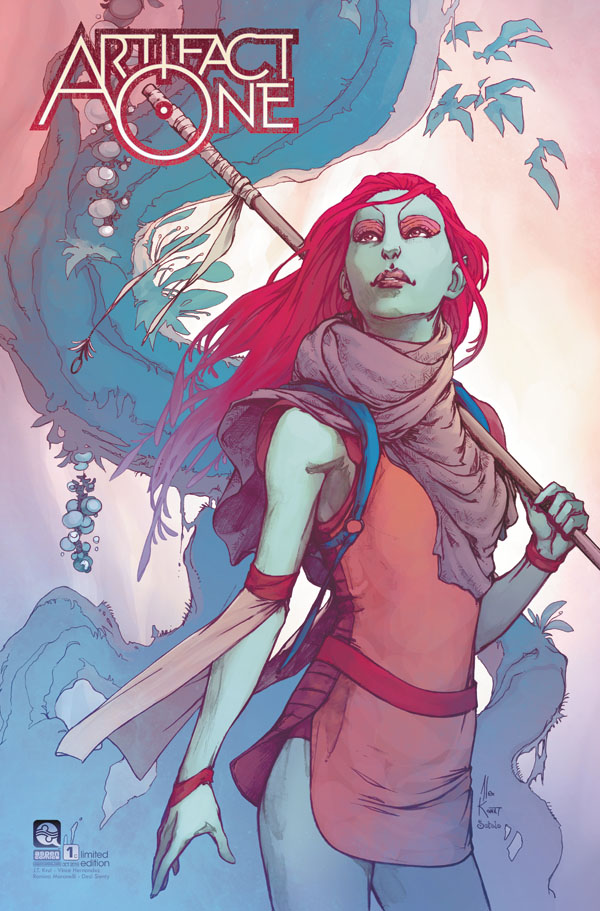 Dellec attempts to come to grips with the realization that time did not wait for him during his prolonged absence. However, an even greater problem lies ahead of him—surviving his encounter with The Hands of God’s deadly chimera creatures!

From the minds of creators Frank Mastromauro (Shrugged, Awaken Skies) and Vince Hernandez (Michael Turner’s Fathom: Kiani, Charismagic), along with art by Andre Risso, Michael Ste Maria and John Starr, this newest volume of DELLEC is gonna redefine your definition of the human spirit! 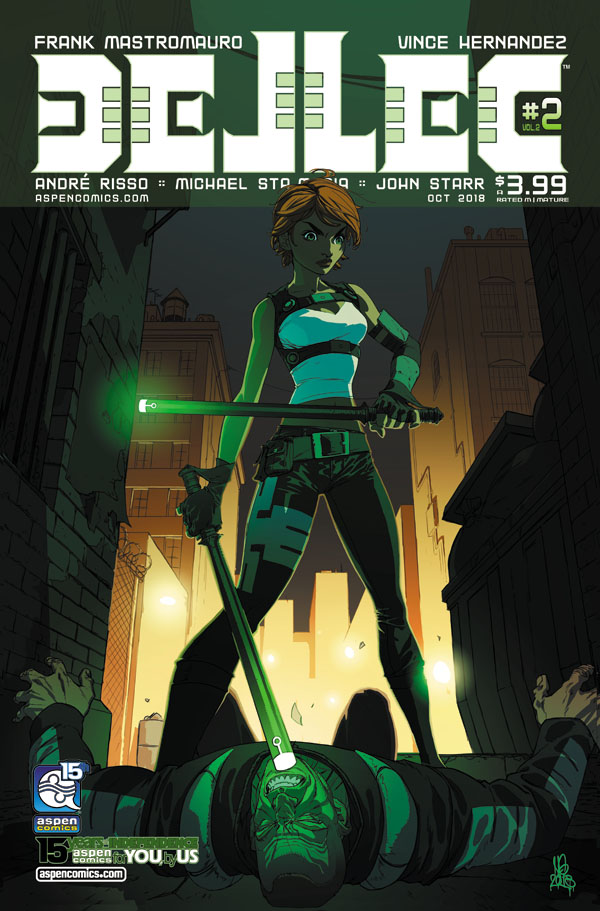 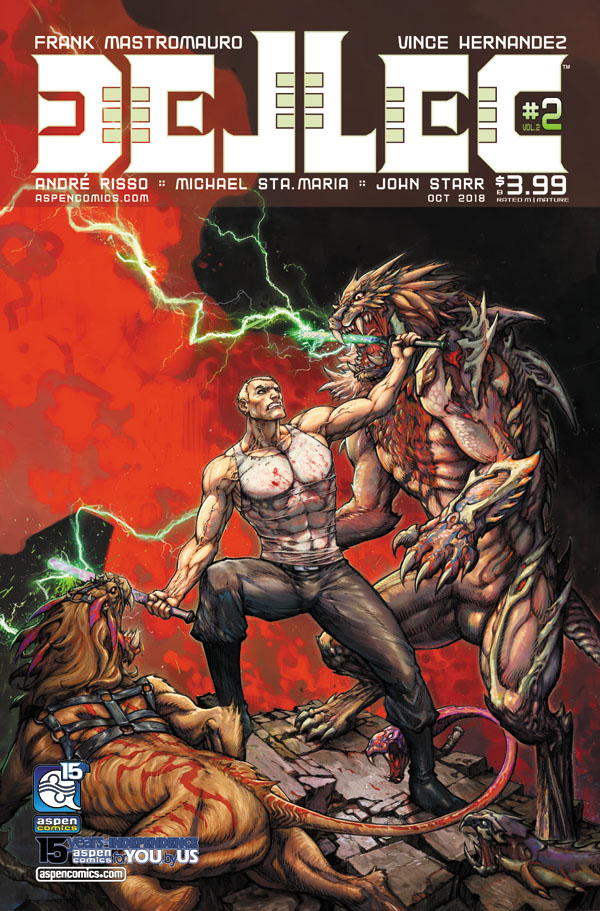 A new world of flight prepares to take the Aspen Universe by storm!

On the run with her friends, Mira begins to uncover that the life she knew wasn’t what it seemed. But, the family talk will need to wait as those in pursuit of the technology she now possesses are closing in…and nowhere on, above, or below the surface is safe! 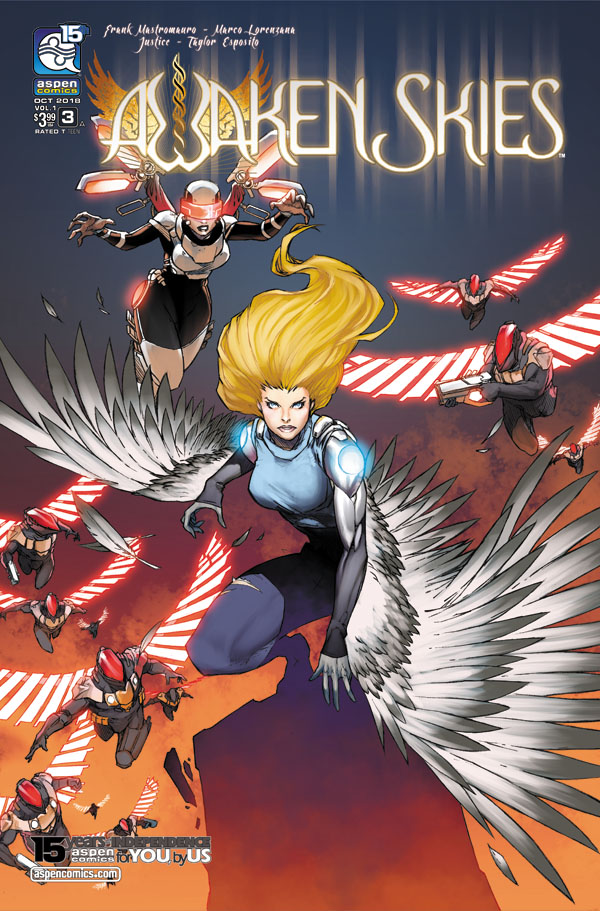 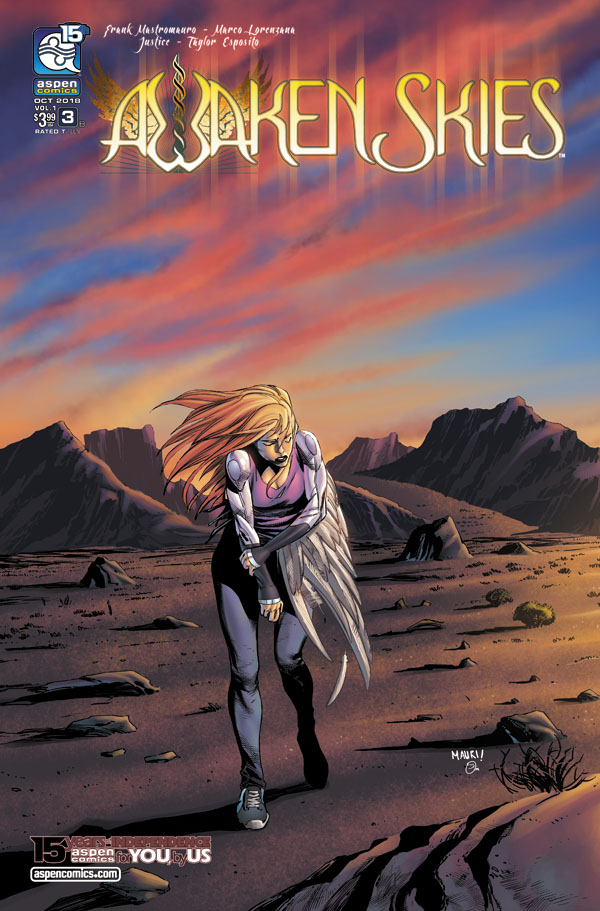 Celebrating the 15th anniversary of its creation, Michael Turner’s incredible vision of magic and wonder returns for an all-new volume!

Malikai and Grace finally come face to face with Janus in the ruins of Egypt, but Janus is less interested in the pyramids than he is of the secret hidden within the ancient structures. Evani is haunted by strange visions from her encounter with the shadow magic. And, if all that wasn’t enough, Rainier is back! 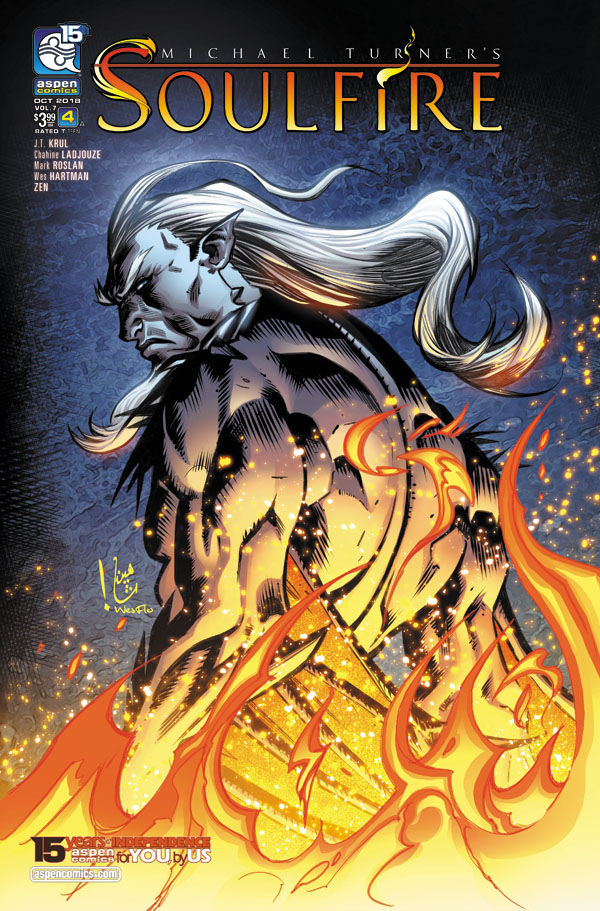 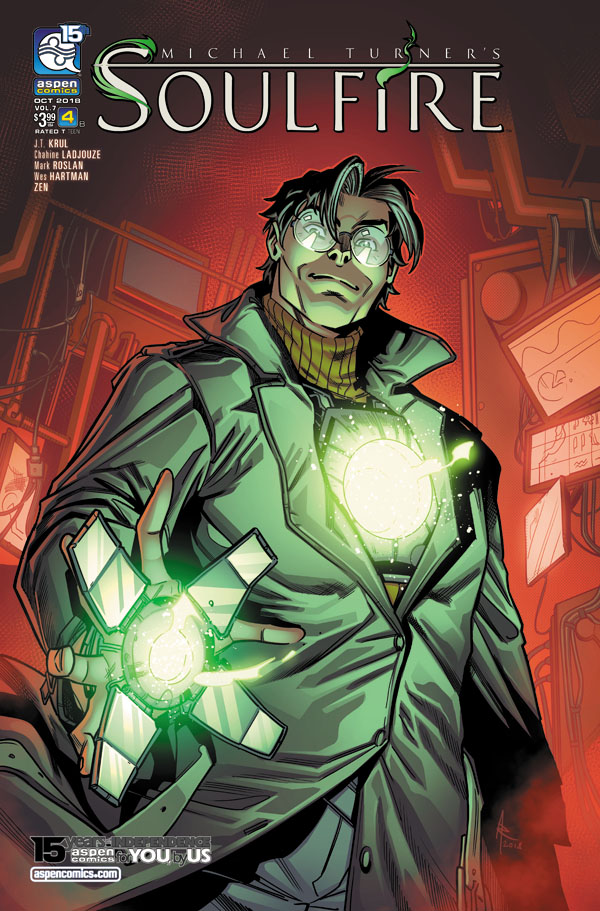 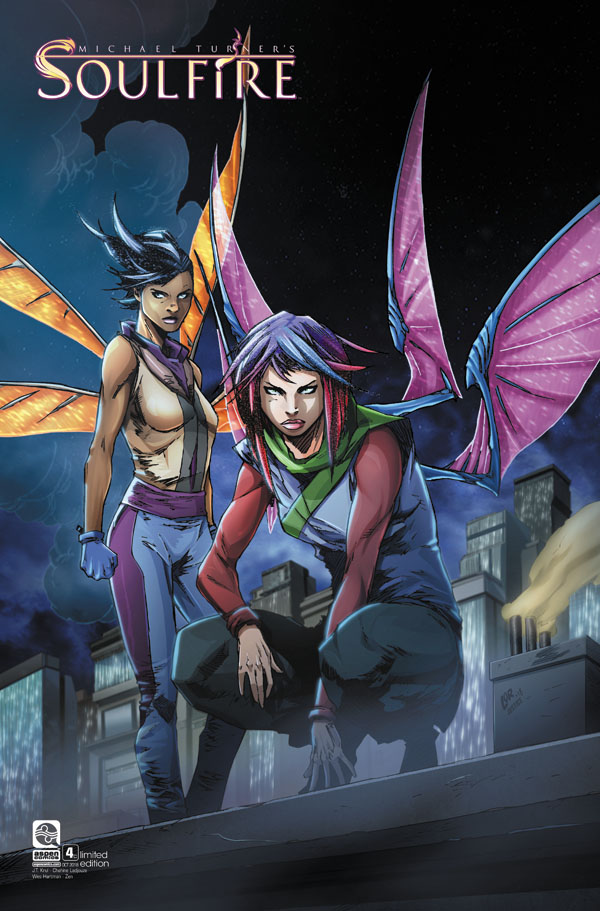 In the not so distant future…

The origin of Delphi’s precognitive powers becomes clearer and she and Pirate find themselves prisoners of the very government they are fighting so hard to protect. Lilith and her cohorts make their long-awaited return to Earth and the source of the power that gave them dominion over humanity so many centuries ago. 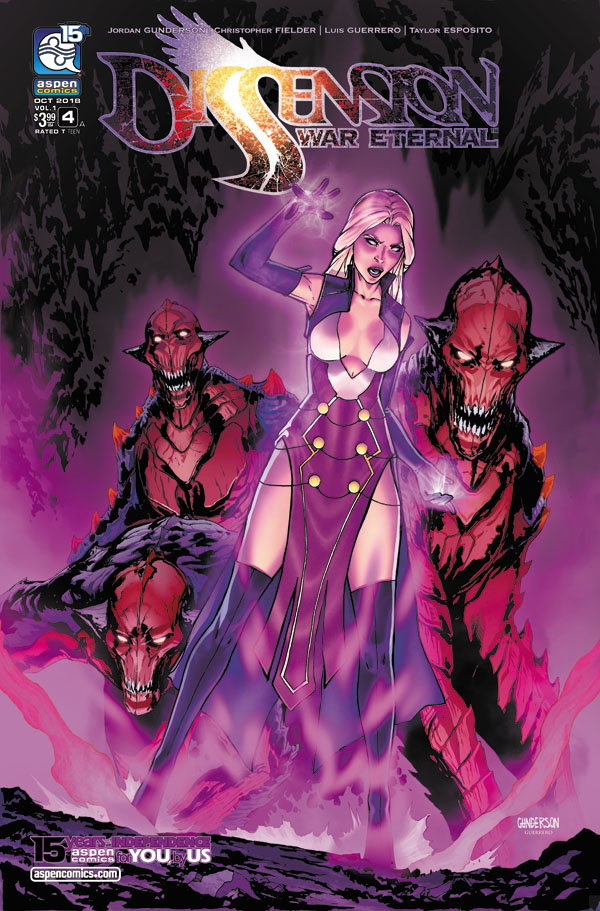 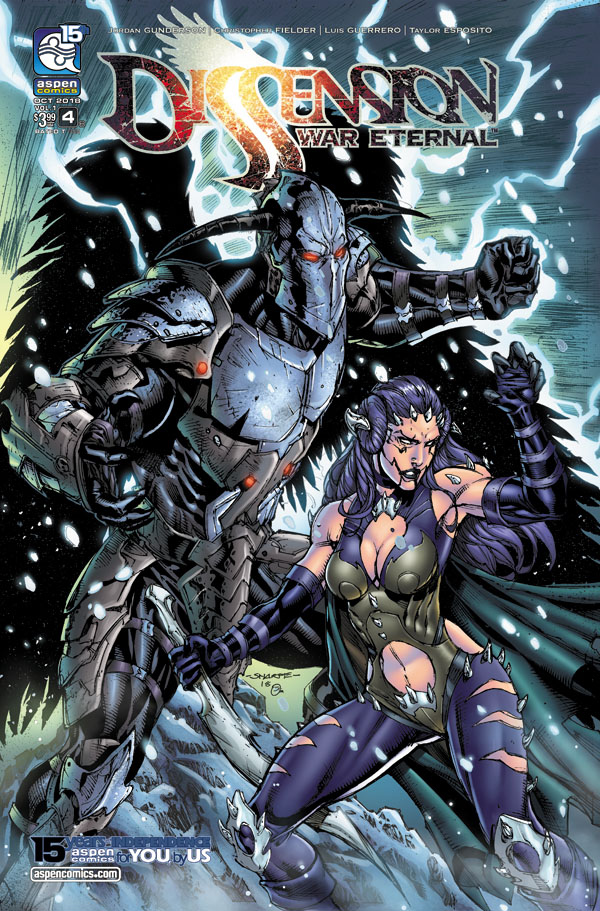 The world of NuWay is one of struggle. For survival. For sanity. For self. As Zihao tries to find a meaningful center, he comes to realize the battle is not just his alone. The balance between humanity and machinery is a delicate one, and it seems to be reaching a dangerous tipping point.

Don’t miss this exciting new chapter of an electrifying story in a bold new world! Aspen is proud to partner with ZMX Entertainment on their landmark project created by J.T. Krul, Yuyan Song, and Dinna Wu, and featuring the stellar creative team of Alex Konat, Mark Roslan, John Starr, and Sal Cipriano. 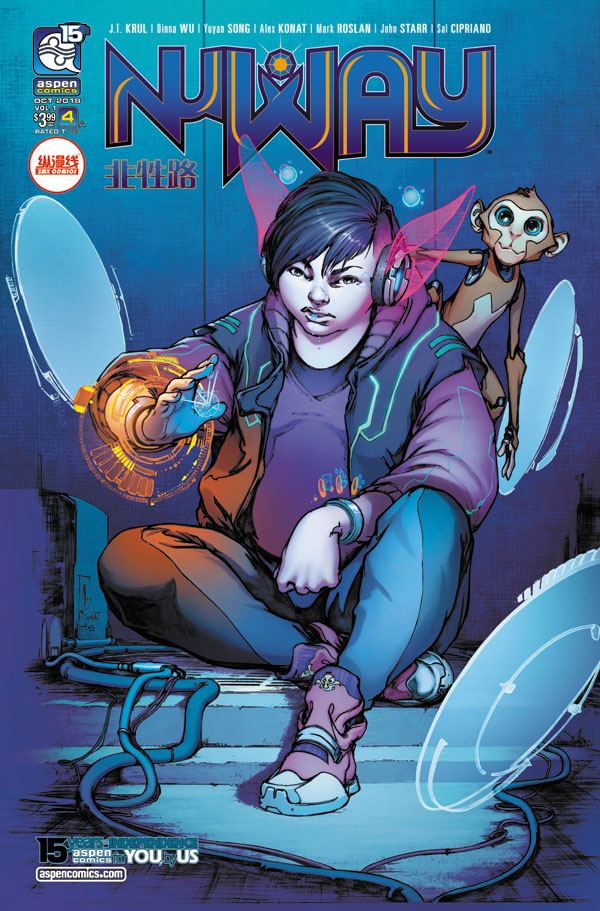 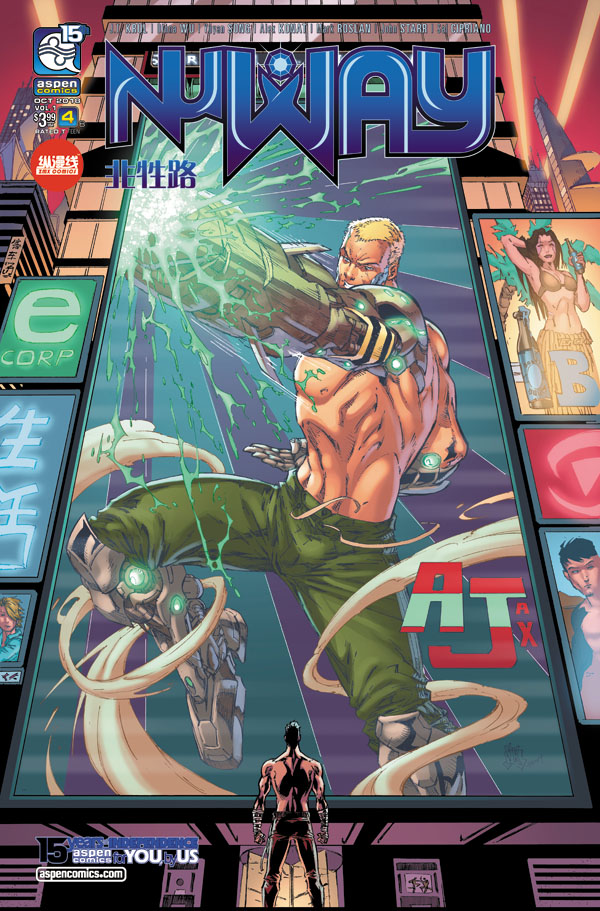 Aspen learns that her battle with Killian has far-reaching consequences both below—and above—the surface, as Fathom’s preeminent heroine continues her quest to get to the bottom of the conspiracy surrounding her brother Finn’s connections with the Russian Government!

Michael Turner and Aspen Comics’ flagship title commemorates its landmark twenty years since its debut in grand fashion! The superstar creative team of Ron Marz (Green Lantern, Witchblade) and Siya Oum (Lola XOXO) are on board to deliver Fathom, and the iconic heroine, Aspen Matthews, to a new generation of readers as well as loyal fans alike! 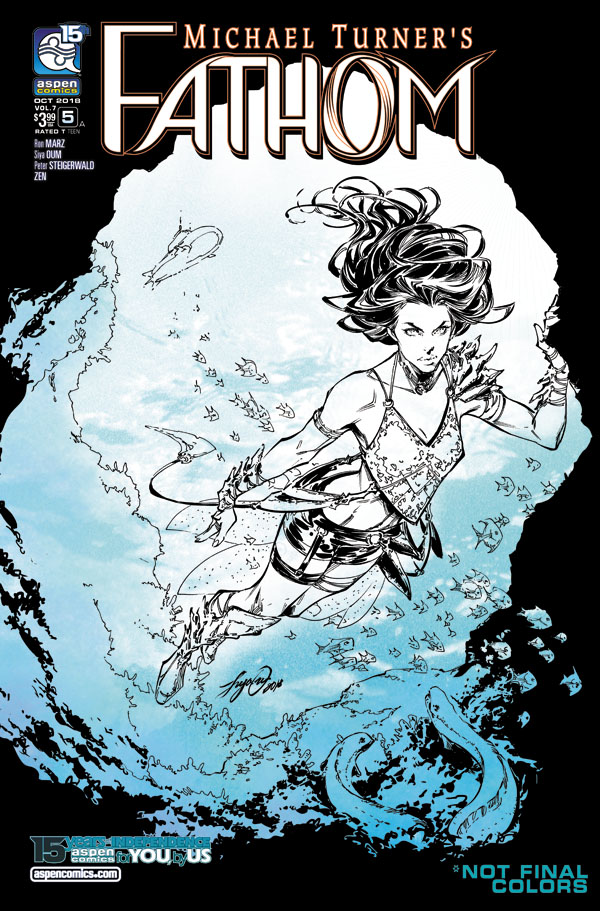 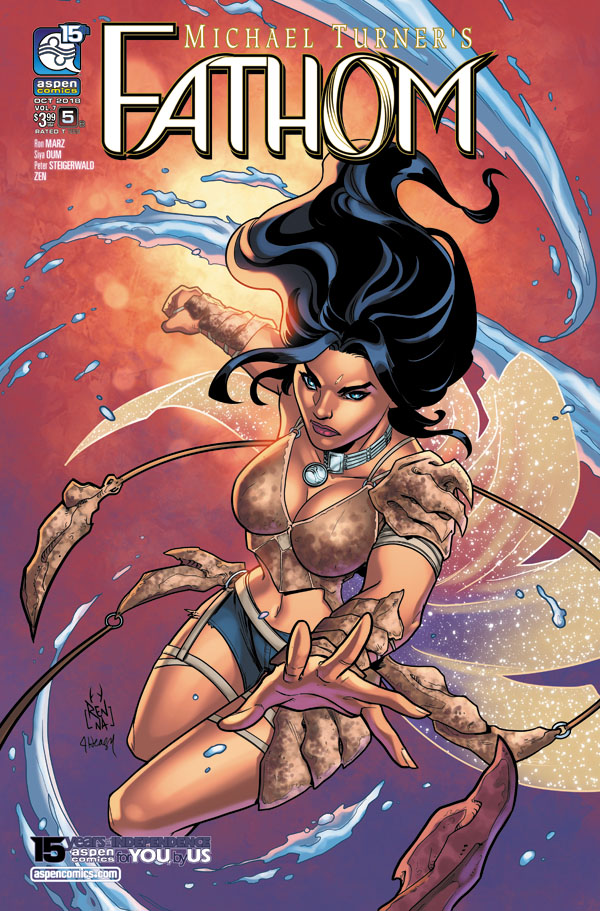 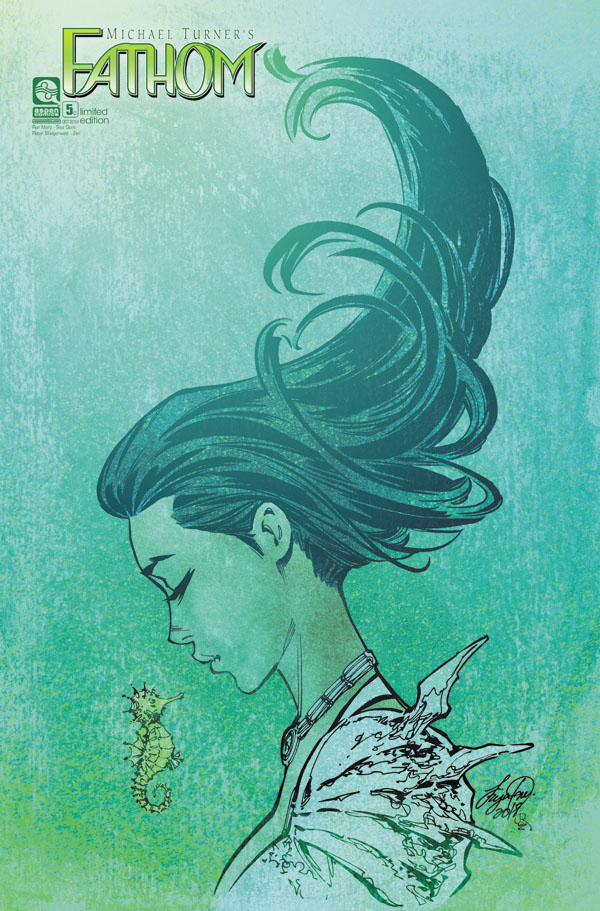 The story of The Death Princess begins here!

Orlana, spoken of in hush tones as the “Death Princess,” rules over all who oppose her reign. Not by force, but through the most dangerous of all magical powers-the ability to control minds! Under the Death Princess’ shadow of dominance and fear, the humans of Earth find themselves at risk of their civilization falling completely under her rule forever! Until Kon, a young but powerful wizard finds himself on an unimaginable quest to break Orlana’s curse on humanity, and set free those she wishes to forever hold under her spell!

CHARISMAGIC: THE DEATH PRINCESS TPB is in stores October 10th, 2018! 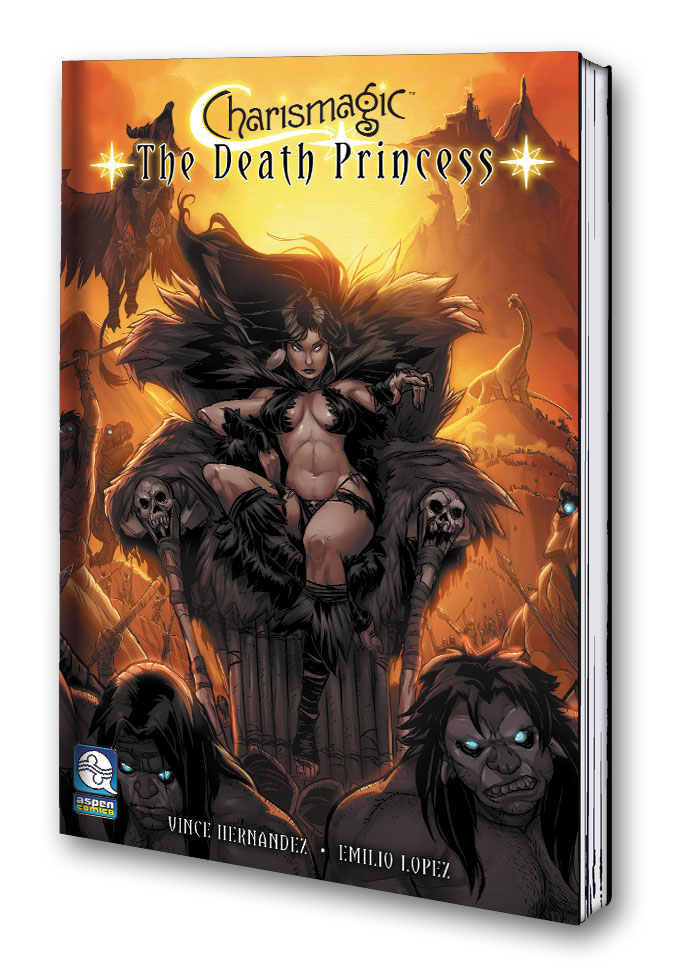 Following the groundbreaking events of Aspen Universe: Revelations, the world of Aspen’s pre-eminent heroes is torn apart by a force far greater than any they have ever faced—the collective might of Aspen’s most powerful anti-heroines! Together, this super group of dark ladies have a plan so catastrophic for the future of the Aspen Universe, that NO character is safe from their clutches!

The long sold out Kiani volume 3 series is collected in its entirety, including a comprehensive cover gallery and a whole lot more! 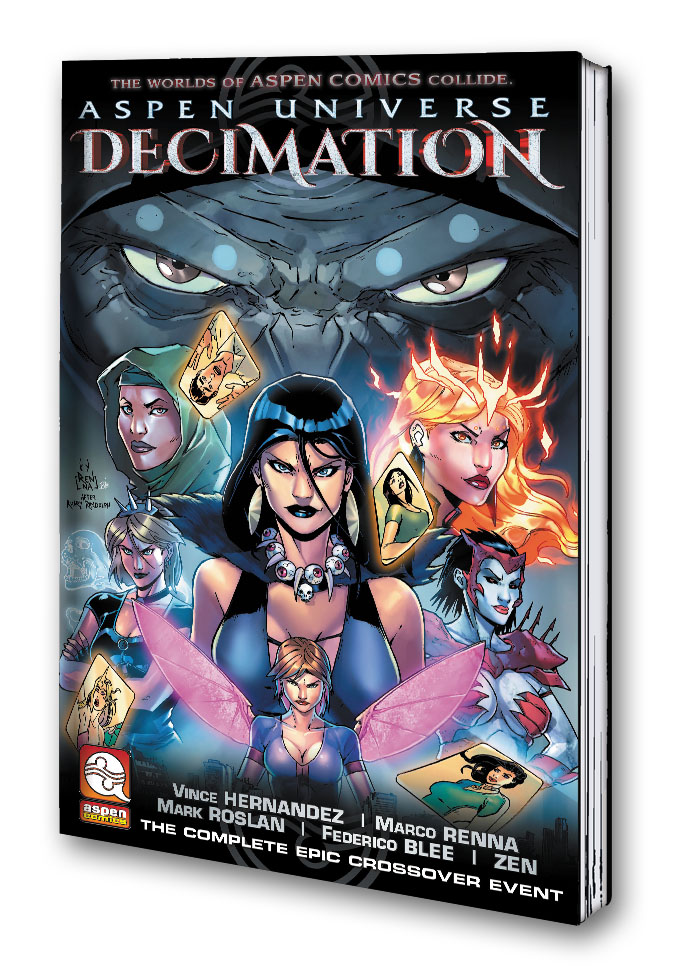 From writer David Wohl, the co-creator of Executive Assistant: Iris, Legend of the Shadow Clan and Witchblade, Giuseppe Cafaro, the artist of Fathom: Kiani, and colorist Wes Hartman, comes a new tale spanning centuries, hidden deep within the heart of the ancient civilizations of Africa. While in Spanish Harlem, Emergency Medical Techs Michael and Naomi are working the violent and unpredictable streets daily. However, nothing can prepare the duo as a routine police shooting reveals something far more powerful—and dangerous—for Naomi’s future!

One of Aspen’s most thrilling new series, the Santeria: The Goddess Kiss vol 1 TPB collects together the entire first volume along with a comprehensive cover! 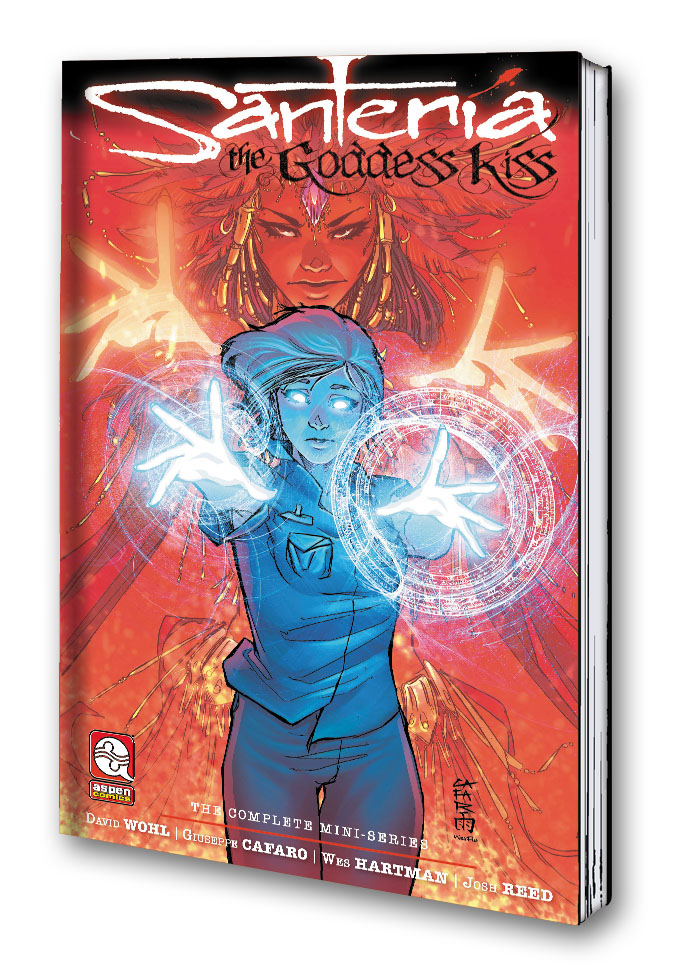 One of Aspen Comics’ most requested products of all-time in now a reality!

The iconic Aspen Matthews pendant necklace straight from the pages of Michael Turner’s Fathom is NOW AVAILABLE for fans and fine jewelry enthusiasts everywhere! Presented by world famous jewelry makers, Han Cholo!, this stunning pendant is crafted from 100% hypoallergenic surgical grade stainless steel and presented on a 20” box chain necklace. This is sure to be the hottest piece of comic book related jewelry of the summer!

One of Aspen Comics’ most requested products of all-time in now a reality presented in a Sterling Silver premium edition!

The iconic Aspen Matthews pendant necklace straight from the pages of Michael Turner’s Fathom is NOW AVAILABLE for fans and fine jewelry enthusiasts everywhere! Presented by world famous jewelry makers, Han Cholo!, this ultra-premium edition of the Aspen Pendant is crafted from 100% .925 Sterling Silver and presented on a 20” snake chain necklace. For the most dedicated Fathom enthusiasts, don’t miss out on the ultimate Fathom collector’s item! 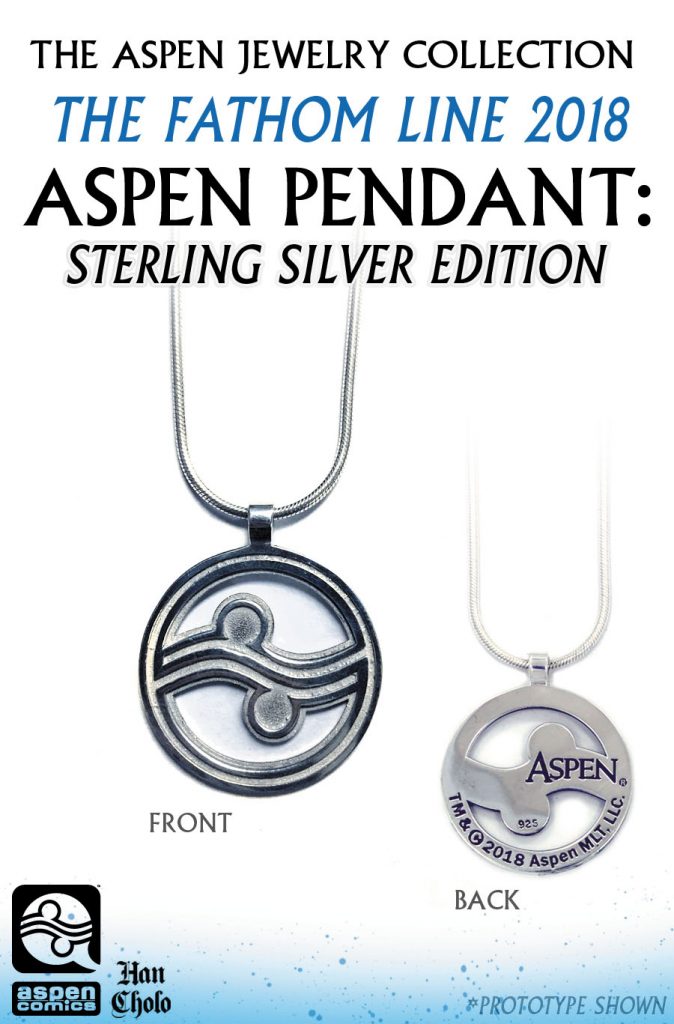