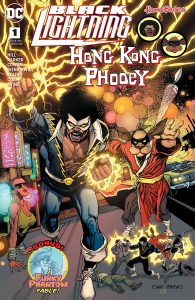 Back from Viet Nam, kung fu master Hong Kong Phooey has set up his own detective agency in the inner city. Meanwhile, Jefferson Pierce (a.k.a. Black Lightning) has uncovered a plot by three assassins to collect the components of a sacred text revealing the darkest secrets of Martial Arts magic, and they’ll kill anyone who owns them—including the dog who holds the last chapter of the book, Hong Kong Phooey. Plus, a tale of the Funky Phantom as he goes toe-to-toe with the Spectre in a tale by Jeff Parker and Scott Kolins.
———-

First of all, let me just preface this piece, and date myself, by saying that I was not only a huge fan of Hong Kong Phooey’s Saturday morning cartoon (that’s before cable TV and the Cartoon Network, kids), but I also had his lunchbox! I wore a red bathrobe around the house, jumping off my bed to deliver what can only be laughingly referred to as “Kung Fu kicks” and karate-chopping imaginary bad guys. Drove my folks nuts.

More recently, I’ve jumped back onto the Black Lightning fan wagon after watching the very impressive first season of his TV show on the CW. I’ve thought he was one of the most underutilized character on DC’s roster since his run with Batman and the Outsiders (when it came down to the coolest character, it was always between him and Metamorpho… after Bats, of course), and I thought it was great that he was getting a TV series. I’ll admit to being a little nervous about Black Lightning falling into the overused CW mold, but my concerns were laid to rest by some great casting, some really solid performances, and a surprising lack of angst-driven romantic side stories.

This story, set in the seventies when Grindhouse was king, couldn’t have brought a more appropriate team-up together. At the time, there was a growing demand for movies like Shaft, and heroes like Jim Kelly. At the same time, Bruce Lee was becoming a household name, bringing martial arts onto the big screen in a way that had never been seen before outside of Hong Kong cinema. The pairing of Black Lightning and Hong Kong Phooey might sound a little odd at first, but out of the slew of DC/Hannah Barbera team-ups coming out this month it’s kinda not the silliest… “Aquaman & Jabberjaw” should make my point.

Writer Bryan Hill has re-worked the Saturday morning kung fu pooch, doing away with the slapstick goofiness in favor of a more serious approach. Anthropomorphized animals are made part of the background throughout the comic, and Phooey (“Penry” to his friends) is a veteran of the Vietnam War, the Sifu of his own kung fu studio, and no one bats an eye at the fact that he’s a talking dog. By turning an oddity into the norm, Hill is able to get past the initial eye-rolls of his readers (yes, me included) and jump right into a story that could have come right out of movie theaters of the mid-seventies. Then it’s all about a storyline centered on the fight for an ancient scroll that can imbue its user with the forbidden might of the God Fist, the most powerful kung fu technique ever created. Okay, so Hill doesn’t totally leave the cheesy corn behind. That being said, the characters themselves are able to move the story along without acknowledging the ridiculousness of the premise, and overall the whole thing works. In fact, I think it’s exactly the decision to ignore the goofiness of the premise completely, that makes the whole thing work as well as it does.

This being a comicbook that relies heavily on the use of the martial arts to move its story forward, Hill’s writing would feel a little lonely if not for the work put down by the artistic team of Denys Cowan (pencils), Bill Sienkiewicz (inks), and Jeromy Cox (colors). Occasionally a comic will try to use the martial arts as a plot device, and the artwork falls a little flat. The forms don’t quite work, and the action comes off as stiff or unnatural. No worries about that with Denys Cowan’s work (for that matter, the description of how to throw a punch correctly lends a lot of credibility… someone did their homework, or has trained). Fans and practitioners of the martial arts should appreciate that the figures are drawn with an eye toward the flow of a good martial arts fight. Maybe more important to some, attention was paid to the forms themselves, and Cowan presents strikes, kicks, and stances that look pretty darn good, even when a dog is performing the technique. Sensei would approve. The comic’s look is fleshed out by Sienkiewicz’s inks and Cox’s colors. Instead of going with the obvious look of the cell shaded Hannah Barbera cartoons, they stuck with the more interesting approach of today’s comicbooks.

Older fans who might remember the days when kids had to wait until Saturday morning for their cartoon fix should have plenty to read this month from DC and Hannah Barbera. Let’s face it, there is no way these pairings should work, but in this case work it does. Give it a try… but I’m still not sure about the Aquaman/Jabberjaw book… 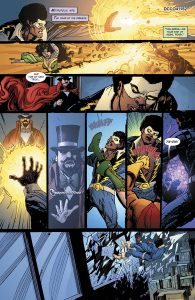 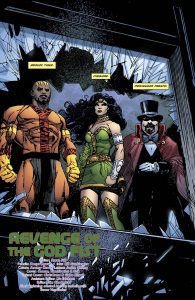 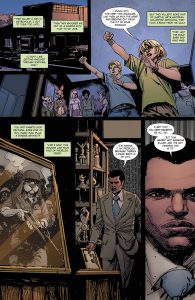