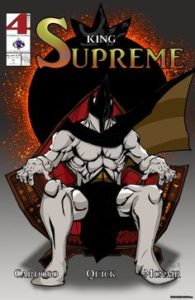 “The greatest good you can do for another is not just to share your own riches, but to reveal to them their own.”
-Benjamin Disraeli

King Supreme: God Complex Enigma is the planned 2nd comic book series following the title character who travels into outer space in search of a new life and finds a new kingdom. King Supreme GCE series will be will be written by Danny J Quick, (Aceblade, King Supreme, SIC Squad) and Illustrated by Wolly Mcnair, (Skull Kids, Fairy Tale Knights, Josie and the Pussycats). This Graphic novel series will follow a new King Supreme Ryan Smith as he receives the incredible powers of the crown and finally has the ability to escape the environment that he’s been trapped in his whole life.

The series will explore themes of trust, loyalty, community, and personal responsibility. Following the events of the first King Supreme short story and comic book, the former Supreme has lost the crown and it’s now under the control of young Ryan Smith.

Ryan is not a “good kid” by any measure of the word, but he never had someone to show him any other path than the one he was on before obtaining the power of the crown. Once he obtained the powers to fly and endure any physical pain imaginable, he did the one thing he’d always dreamed of in his community. He left.

Wolly and Danny, now co-owners of the King Supreme Intellectual Property, are launching a campaign on Indiegogo.com in hopes of raising $2,500 to print the first run of this 100 page graphic novel. Backers will be able to get the comic book and other 4th Wall and GOrilla Bred publications at a fraction of the expected retail prices. From now until the campaign is over The PREVIEW comic will be free with a subscription to the 4th Wall Pros website. 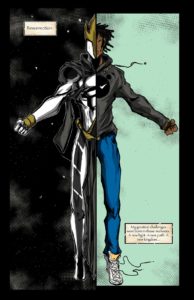