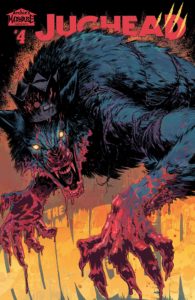 Who is Elena Cooper? Take a trip back through time to witness the history of the mysterious matriarch of the Cooper Underground and the threat she poses for Jughead in the present day!

The feud between the Jones Clan & the Coopers has been waged for quite some time. Jughead, latest in his line, has found out the hard way just what it’s all about. The Coopers, including Betty, are werewolf hunters, and the Joneses have had a long standing relationship with the light of the full moon. Now Jughead and his cousin Bingo are on the run, trying to stay one step ahead of Betty and family. Meanwhile, Betty’s aunt Elena Cooper takes a trip down memory lane… possibly to the start of this particular family feud.

Boy, you don’t keep up with some of these comics, you can get left behind in a hurry. I’ve been aware of some of the twists being taken by Archie and company in the last few years (let’s see, Archie died and became a zombie; Archie took on a Predator; Archie’s all of a sudden a total hunk on TV…), but I just haven’t been paying enough attention. And now Jughead, the happy go lucky lover of all things burger, is a howling, snarling werewolf, and Betty is a werewolf hunting badass…

So just in case there’s any doubt, these aren’t the same Archie comics that the older folks in the crowd might have read as kids. They’ve gone from “Gee whiz, let’s head on down to Pops’ for a milkshake” to “Die, you furry freak of supernatural mayhem”. By all accounts it was a good move for all involved. Not only have the non-paranormal titles in the line stepped up their game in their storytelling, but they’ve branched out to embrace the current popularity of urban fantasy (for those unfamiliar with the genre, I’d like to point you toward the works of Jim Butcher, Patricia Briggs, and recommend you check out Supernatural on the CW).

And Jughead’s a werewolf. Kind of obvious, given his historically insatiable appetite.

First and foremost, I have to say that even though I haven’t been following this series from its start, Frank Tieri has given his story some pretty solid bones. Even though I was playing catch up, I got into the narrative and was able to pick it up pretty quick. That’s not always an easy thing, and for a writer to manage bringing in a new reader shows a great grasp on their trade. You might think that the fact that I used to read Archie Comics as a kid would help me out in picking this series up midway through, but wouldn’t you know it, the one I decide to take a look at is one that spends much of its time in a flashback. Tieri gives readers a peek back in time, and maybe gives some insight into the Cooper/Jones feud as he lays out some details on the mysterious Aunt Elena.

The issue’s artwork, split as it is between Pat & Tim Kennedy on pages 1-10, and Joe Eisma for pages 11-20, holds together well, and the two artistic styles mesh without a clash. Without a doubt, some of the thanks for the painless transition goes to colorist Matt Herms, as he acts as the spackle that smooths over any rough spots readers might have felt in the changeup of artists. In all cases, the artists have embraced the genre and have held nothing back. There’s hacking and slashing aplenty, with plenty blood and viscera to satisfy all palettes. I’ll happily give credit to the lettering by Jack Morelli, as his use of fonts pretty much covers all bases, from sound effects to text messages. I know it’s a letterer’s job to be pretty unobtrusive, but even with that in mind, Morelli’s work does a good job of bridging gaps.

If you’ve looked past Archie and friends in recent years, you might wanna take a closer look at what the old line of comics has to offer. I think it really is safe to say that there should be something here for anyone, of any taste.