Anime, Cosplay, Video Games, Comics and more: AnimeMKE is the fan conference for all comers.

Anime Milwaukee 2018 is in the books.

Southeastern Wisconsin’s premier gathering of otaku is doing its very best to fill the hole left in our Midwestern hearts when GenCon moved to Indiana. Indiana! Who in their right mind moves to Indiana!? On Purpose? Really?

Is AnimeMKE a GenCon competitor? No. Not yet. But give it a few years. 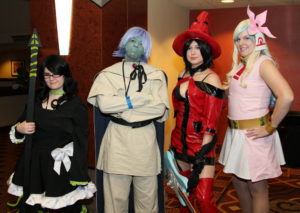 Cosplay is the thing.

The cosplay at the con is fantastic. World class, and deeply, deeply Milwaukee.  Listen: There was a guy at this year’s con dressed as one of the Knights Who Say Ni from Monthy Python and the Holy Grail. If there’s been an anime adaption of Holy Grail, I am unaware of it. There are plenty of Deadpools, Spider-Men, and comic standards, but there’s also a fantastic amount of obscure alternatives. Video games were also well represented. Overwatch characters were in great supply this year. Both Link and Princess Zelda made many appearances. League of Legends represented.

The line between Comic-Con and Anime Con blurred at AnimeMKE, and that’s a good thing, because Milwaukee needs a place for its furry, video game, comics, and Cartoon Network-loving communities to come together and revel in their shared fandom.  AnimeMKE transcends anime. It has become the premier place where the cosplayers of the dairy state gather. And that’s great. 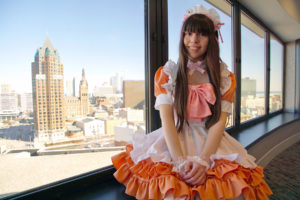 As a first-time cosplayer, I can tell you this: the event is more fun in costume. But in practice, make sure your costume has comfortable shoes. And also, being part of the Masquerade means being part of the cosplay contest. Maybe that’s not news to you guys. It was to me.

Smash cut to Saturday night, and my cosplay team and I are dashing across the main stage in our homebrew and thrift-shop modified leather jackets dressed as one-half of the team from Final Fantasy XV. We’re in front of a few hundred people and we’re trying not to freak out because of how amazing all of the other folks in the beginner bracket are. 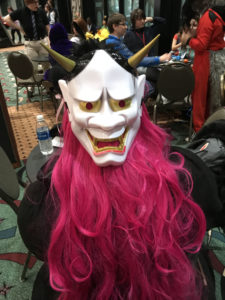 In 2018 in particular, top-notch professional cosplay talent was part of the draw. For me, being the only Final Fantasy XV cosplayer on the big stage was made all the more magical knowing that John Cerabino and Leon Chiro, both renowned for their Final Fantasy cosplays, were on the judging panel.

“I love the energy; you have the right spirit,” Chiro told me during our one-on-one morning judging session. “It’s great to see a family having fun with characters they love. And putting your personal spin on a character is all part of the experience.”

It was one of those wonderful compliments to get. It was at once endearing, compassionate and inspirational. It also belies a little bit of the truth about my first cosplay. The stitching needs work. The patches are not at the right scale. Your wig is good, but not great. The details have been handwaved. The spirit of cosplay has been met, the tailoring thereof has not. The energy is good. 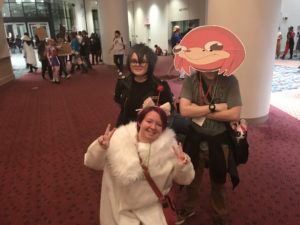 This is good though; it’s a lesson learned. And for what it’s worth, I am so proud of my cosplay team. To have a costume in mind, create it, and then be brave enough to walk on stage together in front of people is an amazing thing. We had no idea what we were getting into, and Chiro and the other judges didn’t crush us. Instead, they supported us. We did not place. But we were inspired to try again. That’s a sign of a great community, and a great con– we’re all stronger when we build each other up.

A place to purchase

There is a smattering of midwestern cons represented in the hallways outside of the main vending hall, but the meat of the weekend is inside the artist’s alleys and vendors booths. There are incredible artists hocking original works. It’s a twisty-turny and brightly colored maze of, uniquely talented sculptors, painters, sketchers, and leatherworkers. 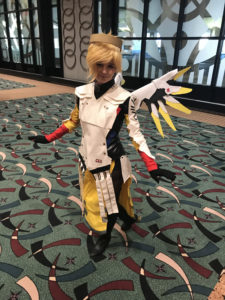 What you won’t find, and this is where the con’s anime roots really show, are huge collections of longboxes. There are a few nods to comics culture here and there, but for the most part, the art, collections, stuffies, and figures for sale are strictly of an anime/manga nature. Don’t come here looking to find rare issues of mainstream comics. Do come here to find a three-foot-tall statuette of a girl from a visual novel that was only released on the PlayStation 3 in Japan. 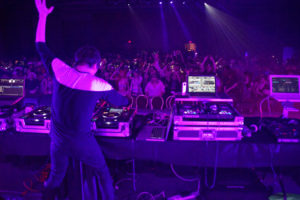 There are breakout sessions of varying quality and subject held throughout the weekend as part of this conference, but they’re clearly the third leg of AnimeMKE’s three-legged stool. And that’s ok. I go to the occasion session. I find myself repeatedly down at the meetup space to see the cosplayers come together on the half-hour. I enjoy a good conversation about Anime Culture and the occasional panel discussion.

When it comes to conference sessions, I am a big fan of the law of two feet. That’s the law that says if you’re neither getting not giving value at any given breakout session, you are empowered to use your two feet to take yourself somewhere where that you will. 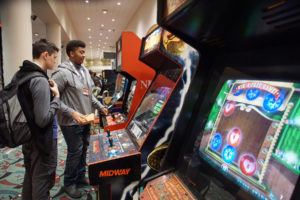 Truth is, I spent a good amount of time at the arcade, a collection of free-to-play Japanese imported dancing and rhythm games and free-to-use video game consoles spread out across the whole room. There’s a PC LAN and there are a few tournaments throughout the weekend. You can borrow a Nintendo Switch and get your MarioKart on. Or sit down and see what it was like to play Dr. Robotnic’s Mean Bean Machine on a vintage Sega Genesis. It’s all good. 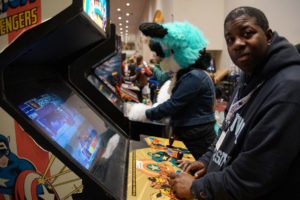 One thing that gets lost (sometimes) at this con is that there is a whole other con happening at the Hyatt across the street. Using one of Milwaukee’s ubiquitous skyways, a short walk along a long hallway will grant attendees access to some of the geekier programmings at the event. An extensive manga library, video screenings, and the heralded tabletop gaming arena are parked in the lobbies of the Milwaukee Hyatt. Of particular note is the open gaming sessions. This is another one of those things that if you’re into, you’re really into. In an open gaming session, you’re invited to get a game going, join a campaign, play some Magic the Gathering, borrow a copy of Munchkin or Settlers, and throw some dice. It’s a nice bonus feature of AnimeMKE that really makes the event appealing to the whole nerd family.

At the end of the weekend, after the hotel rooms have been vacated and the complicated cosplay wardrobes have given way to sweats and loafers, the con winds down and the Wisconsin Center starts to look familiar again. It’s a good con. It’s put on by good people. This conference is ready to grow into something that might just be too big for Milwaukee to handle. And then, look out. It’s going to really be something special.