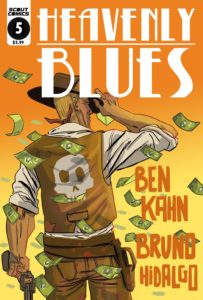 When a member of the angelic host wants something stolen, who does he go to? Why, he goes down to the depths of Hell to find the most cunning of thieves, of course. With an offer of release from the pits of Perdition and entry into Heaven, Isaiah Jefferson has assembled his crew of rapscallions: all around Western outlaw James “Coin Counter” Turner; Egyptian tomb raider and feminist before it was a thing Amunet; master ninja and newly reformed addict Hideki; falsely accused but still burned at the stake “witch” Erin Foley. All that’s left is for everyone to flesh out the particulars of their individual roles in the caper, while Jefferson and Erin get a closer look at their target- the personal vault of the archangel Uriel, who happens to be one of the biggest and baddest of the archangels and was there in the thick of the battle when Lucifer “got uppity”.

As the plot for Heavenly Blues starts to bring all of its threads together for a grand climax, we’ve been given glimpses into the lives of the story’s principals. In this issue, readers are given a look at the rise and fall of James “Coin Counter” Turner. His life took a turn for the worse when he was diagnosed with “consumption” (tuberculosis), leaving James to consider the choices and paths he never took. He turned his back on the quiet life of a banker’s son in favor of a life on the wild side, embracing his new creed, “if it feels good, do it.” Consequently, Coin Counter racked up a truly impressive list of sins, and when his time came he went out with a few regrets and a lot of memories. Now the designated “getaway driver” in Jefferson’s grand plan, Coin Counter finds himself among a group of like-minded individuals and discovers that this group is the closest he’s had to family since 1871.

Heavenly Blues has been a personal favorite of mine since picking up the first couple issues at a comic convention, long before anything had been officially released. The hook was set, and as the series begins to ramp up to a finale I couldn’t be happier to have been a part of it. Ben Kahn has brought together a great group of broken characters, each with a great backstory that’s been revealed piece by piece over the course of the run. My personal favorite so far has been Erin Foley, accused of witchcraft at an early age and burned at the stake for it. She’s carried a grudge against pretty much everyone and everything ever since, but has developed an unshakable- and fully returned- friendship with bank robber Isaiah Jefferson. Not content to stop with great characters, Kahn has also laid out an impressive amount of world building. His iterations of both Heaven, where a divinely comfortable existence has resulted in widespread complacency, and Hell, which is as much about how much personal guilt a soul carries into the afterlife as it is about true evil, are totally new and philosophically interesting.

Much of the credit for the worlds built has to go to the artist, Bruno Hidalgo (who, by the way, should also get some recognition for having a wicked cool name). Earlier issues revealed a Hell rendered in a palette of earth tones, all washed out as though coated in a thick layer of dust, more about a grindingly dull existence than eternal suffering. Later issues have revealed Heaven to be… well honestly it’s much of the same, done with brighter, crisper colors but still limited in variety, resulting in a populace rife for exploitation from a group of souls less inclined to stay in line with the herd. Further, Hidalgo has populated his environments in a style that’s not at all what could be considered traditional, imbuing the cast of characters with unique traits that set them apart from anything that’s been done before. We’ve all seen cowboys and bank robbers before, and you can’t turn five pages in a comicbook without tripping over a ninja, but Hidalgo has presented them all with distinct characteristics that set them apart from representations shown in other titles.

This has been the kind of series that, as a reviewer, I haven’t had to work all that hard to highlight the good over the bad. As a reader and one who’s gotten into debates (fine, you can read that as “arguments”) over the merits of the comicbook medium as literature, Heavenly Blues will go down as a great example in the “pros” column. With all of that’s been said, I shouldn’t have to throw in the obligatory “give it a look”. Instead, I’m going to leave you with a cheery “Get thee hence, good reader!” and call it a day. 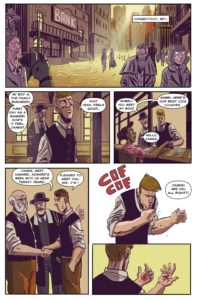 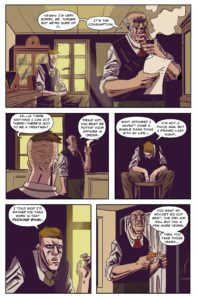 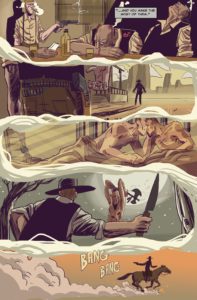 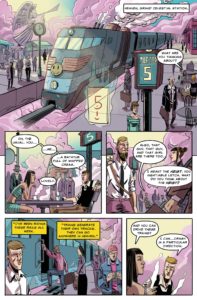