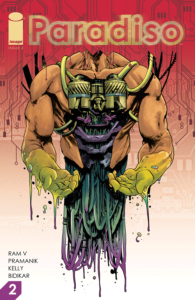 Whispers of the Pneumas have brought Hazard to Aquarius. Noira realizes that she’s in deeper than she would have liked. And, in the aftermath of the attack on his transport, Jack tries to find a way into Paradiso but wanders into a close encounter of the weird kind. Powerful forces are on the move in Paradiso City, but to what end?

Yeah, there’s one thing you’ll learn about ’Diso soon enough. The stories you hear—especially the scary kind—tend to be true.
———-

Everyone wants to go to Paradiso. No wonder, with the sad, sad state of the rest of the world.

Back in “The Great Before”, a cloud of self-repairing nanoparticles was released into the atmosphere, linking all corners of the globe in single network that could be overseen by the sophisticated system known as Kronos. Humanity would be united, with access to an unprecedented database collated from every source of information under the sun. Connected by a global system made up of thousands of relay towers, the Cloud became more than just an advertising slogan. It became a fact of life for everyone, from all walks of life.

Now. The year 332 “After Midnight” (referring to the time Kronos and the Cloud came online, changing the shape of things to come), humanity suffers from a lack of options: Either live day to day scavenging in the barren wastes, or buy/cheat/steal your way to Paradiso, the last bastion of civilization. If you find yourself unable to get out of the wastes, you know to avoid the Fog at all costs. It lurks in the dead places, a ghost of the distant past that digs into the consciousness and plays on your worst fears. It’s also not a bad idea to avoid conflict with the cybernetic overlords of the wastes, beings who use their enhanced power to snatch up any and all technology they come across.

Enter Jack, a wanderer looking for answers to questions he can’t quite make out, searching for a destination that’s always too far away. He has a way with machines, a knack for making things work. It’s a handy skill to have, unless you’re looking to avoid attention. When words like “Tinkerman” start getting tossed around, and the quasi-mystic material called Pneumas is suspected, it might be time to go back on the run.

Paradiso is sort of a genre all its own. What I got out of the first two issues (and a thank you to the always awesome Ram V for putting his latest title on my radar) is that its DNA is rooted in cyberpunk, a technophobic prophecy of what nightmares may come. But in place of neon and chrome, there’s the grimy, gritty, post-apocalyptic setting of dystopia gone wrong. It’s Terminator meets The Matrix, with Mad Max doing his damndest just to stay the hell out of everyone’s way.

I’m gonna be dead honest with you. Two issues into this series, and I really don’t have a clue what it’s actually about. And I’m HOOKED. Ram V has weaved together a story that makes the bold play, refusing to hand feed its readers everything they want to know all at once. There are angles and threads aplenty, as Ram (or is it V? Mister V?) pulls the elements of his story together a piece at a time, teasing his readers into coming back just to find out what’s going on. I do know that his characters are all interesting (even in cryptic glimpses), there are no obvious “good guys” and “bad guys” (yet), and the world he’s built (maybe destroyed is more on the mark here) is one that doesn’t quite fit neatly into any singular niche.

We’re talking about a comicbook, of course, so it goes without saying that a story like this is going to need some pretty impressive art to pull it off. Before I say anything else, just scroll down and take a look at those covers and preview pages. The team of Dev Pramanik & Dearbhla Kelly has answered the call, and doubled down. Not really reliant on action, although what’s there is crafted with an eye toward the cinematic, Paradiso is built more on the premise of taking something familiar, breaking it down into component parts, and then twisting it all together for something a little… different. Perspectives aren’t always what you think they’re going to be, and if a scene evokes a certain sense of familiarity, get over it cuz it ain’t gonna last. In short, it’s just cool looking, and occasionally a little bit disturbing.

Paradiso is promising to be a bit of a mind-bender. The good news is that it’s only two issues in. The bad news is that two issues is plenty of time to get sucked in, like a junkie looking for a length of rubber tubing. 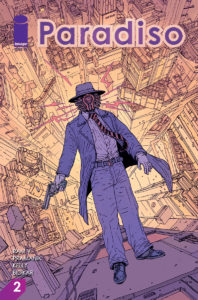 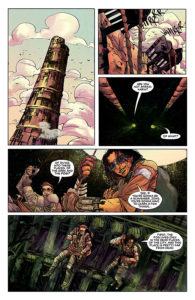 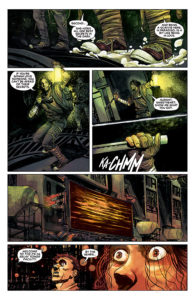