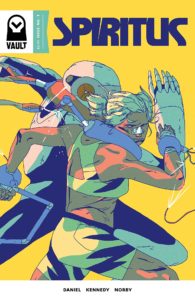 A champion fighter convicted of murder, Kinju Dayal faces automated confinement. The transfer of her consciousness into a state programmed labor machine. But a ruthless underworld boss diverts Kinju into a vessel unshackled from its rigid programming. Only Federal Marshal Rueben Reveles stands between the armored warrior and sanctuary.
———-

Spiritus starts out as sort of a PSA, proclaiming through its narrative that society has wrongfully abandoned millions of its citizens to incarceration. Aberrant behavior results in the perpetrator being removed from the whole, a cancer cut away from the body to be tucked away in confinement where they will be ignored and forgotten. Thankfully, the Automated Confinement Work-Release Program has saved us from ourselves. Rather than being locked away in a cell, of no use to anyone, criminals are physically suspended in stasis, their minds uploaded into a machine and put to work as part of an automated labor force. Everyone wins… mostly. What isn’t addressed- at first- is the mind numbing horror of having your consciousness pulled away, to be confined in a prison that’s more restrictive than the coldest cell, doomed to an existence of servitude inside a machine.

Kinju Dayal, still insisting that she’s innocent of the crime for which she’s been convicted- the murder of her husband, is offered a choice. Before her mind is uploaded into a machine that’s restricted by countless codes and safety protocols, she can choose to be confined in a robot that’s been specially prepared for her, fully autonomous and clear of outside controls. Free of the normal boundaries, Kinju would be tasked with helping other machines, freed from their programming, to reach safety.

Sound too good to be true? Probably is. Do we think Kinju is going to take the deal? Absolutely. I love the premise of this book, without a doubt. The idea of a professional fighter being uploaded into a high-performance machine body, fighting against a tyranny that’s disguised itself as a benign father figure, is a great turn to an old story. The action doesn’t really kick in until late in this opening issue, but it gives the promise of being impressive.

Tim Daniel has presented an interesting take on the moral dilemma involving incarceration. If our criminals are merely locked away, out of sight and out of mind, are we really doing a service to anyone? Why not, at the very least, allow them an opportunity to perform a valuable service for society as a whole? Issues like choice, freewill, and just gonna come out and use the word “slavery” here, are ignored for the sake of convenience, and Daniel does a great job of slipping it in there all but unnoticed. At first, the argument for the Automated Confinement Work-Release Program sounds totally reasonable… until it doesn’t anymore. What’s more, Daniel has given a very sympathetic heroine to cheer for, presenting her as a brave woman who refuses to bow down to take responsibility for a crime that she didn’t commit. Backed into a corner with a difficult choice to make, a non-life of indentured servitude versus a non-life of conflict and pursuit, presents a more interesting story. Let’s face it, the “hey, you could take the fall or we can totally get you out of here because you seem nice” trope has been done, done, and done. By giving a Kinju a choice between crap or crap puts more pressure on our protagonist as she sets out take on The Man.

Michael Kennedy’s designs are easy to follow, and his shift in viewpoints between the real world and the cyber-reality Kinju is faced with in her new body works well. He uses a limited color palette overall, seemingly different shades depending on the character perspective we’re following, and it seems to be trying to guide the reader toward identifying good guys, bad guys, and all the guys in between. What’ll be interesting is if there’s a “rope-a-dope” in the works, and all of this is just a kind of misdirection.

Visually, Spiritus has the potential of being a very cool dip into the realm of the cyberpunk action thriller. There’s a deeper story at work here, and I for one look forward to following to see how it all plays out. If it really does turn out to be just a series of chase sequences as Kinju evades capture and rescues victimized robots, I’m going to be disappointed. 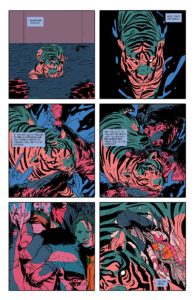 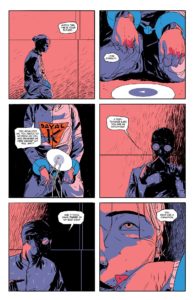 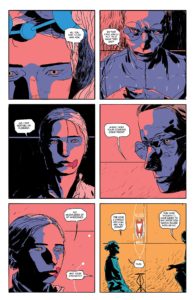