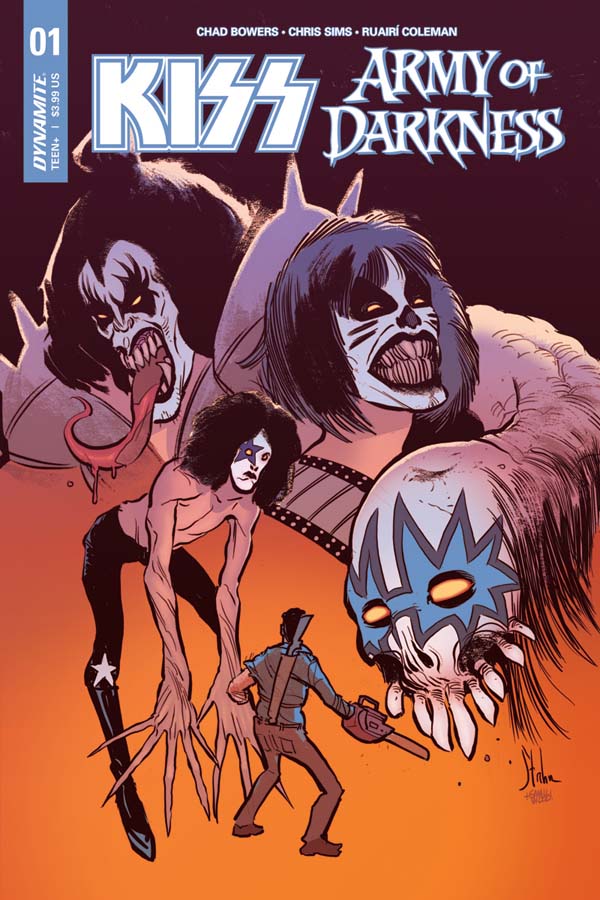 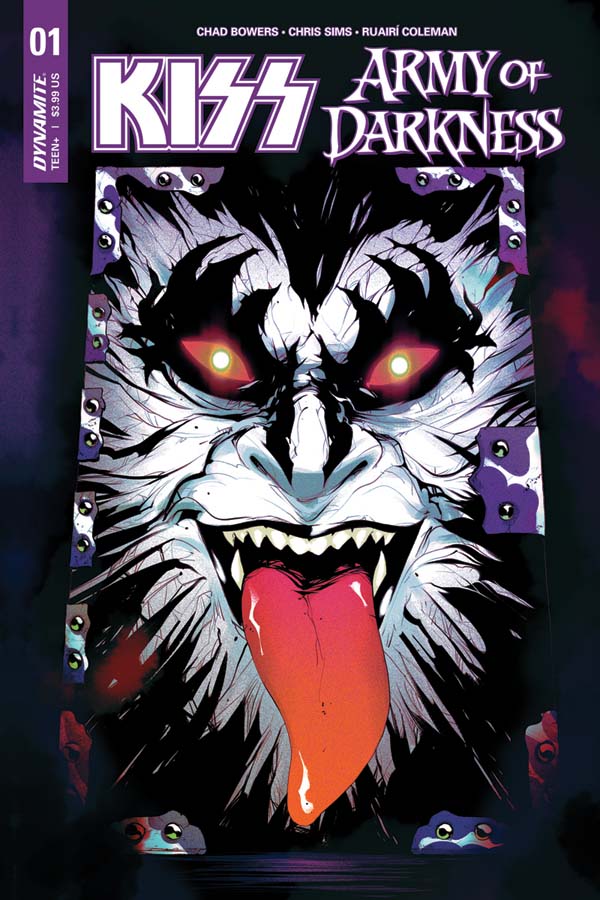 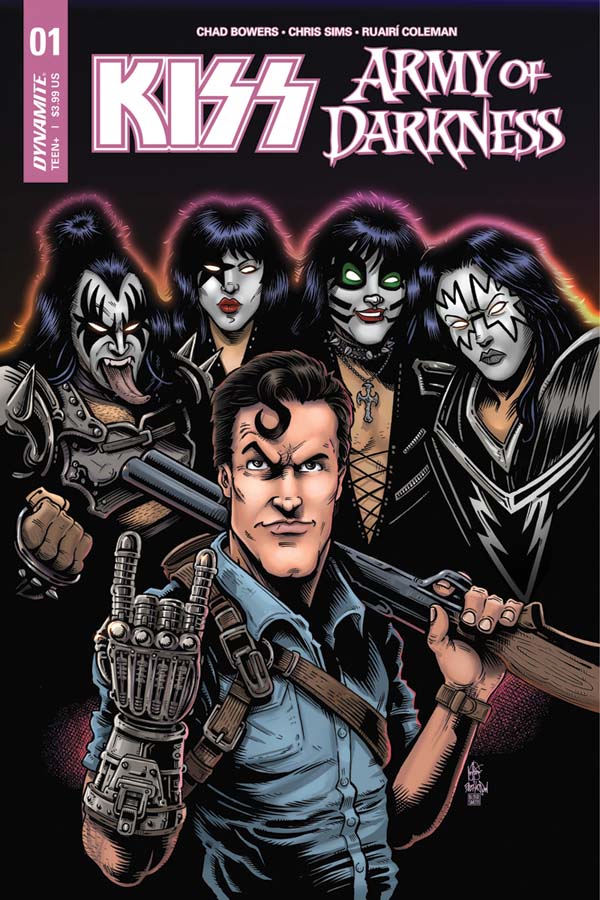 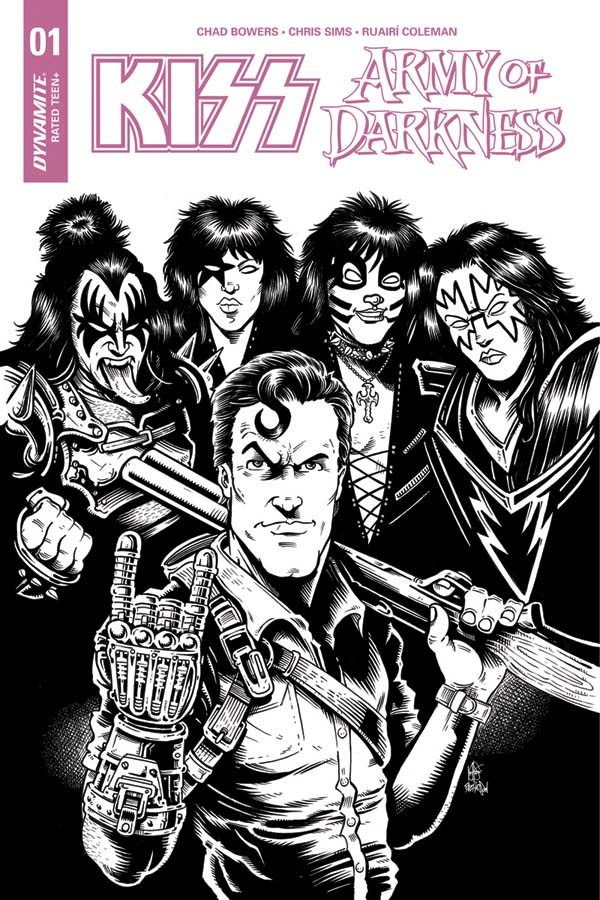 Dynamite Entertainment proudly brings together two of its bestselling brands for a horror/music extravaganza in KISS/Army of Darkness #1, the debut issue in a new comic book series uniting the legendary rock ‘n’ roll band with the comic industry’s grooviest of character! Written by Chad Bowers and Chris Sims (X-Men ’92, Deadpool) and illustrated by Ruairi Coleman (Star Wars: Rebels, TMNT Amazing Adventures), the KISS/Army of Darkness miniseries event is set to launch in February 2018.

KISS is on top of the world and rocking faces until the night disciples of The Destroyer show up and the band disappears. With the tour canceled, a young Ash misses one of the most important events of his life that will change his destiny. Now the Chosen One has to get back on the right path and join the KISS ARMY OF DARKNESS!
Co-writer Chad Bowers says, “With Ash vs. The Army or Darkness, Chris and I were given kind of carte blanche to do whatever we wanted to the world of AOD, and we went for broke. We introduced some new characters and concepts, and built a legacy for Ash’s comics adventures that I’m immensely proud of, but not in a million years could I have guessed we’d get to continue that momentum with the added bonus of tossing the world’s greatest rock n’ roll band into the mix!  I’ve been in the tank for KISS since I was in middle school. I remember buying the KISS tribute album, KISS My Ass for the Lemonheads (they covered Plaster Caster), which lead to me picking up Greatest Hits, and so on. But when I found out there was a KISS comic with blood in it, I signed up for life! Of course, I adore the songs (literally listening to Do You Love Me right now), but I’m just as obsessed with the way KISS transcends the music to become something of a genre themselves. It’s something I think about a lot, honestly, so no surprise, it’s a big part of our story too!”
Co-writer Chris Sims says, “When it comes to Army of Darkness, I guess you could say that Ash is a bit of a gambler, but he’s nobody’s fool. And since our first story was set back at Alan Shepard High, we’re looking forward to showing him some things that you can’t learn in school. Okay, okay, I’ll stop with the deep-cut lyrics now, but for real — if you thought Deadites at Homecoming and the Supernatural Military-Adjacent Response Team were taking Ash in a new direction, just wait until you see how we team him up with the Starchild, Space Ace, the Demon, and the Catman. In the grand tradition of the film, we’re tearing up the entire space-time continuum and if you think you know how weird this is gonna get… well, you sure know somethin’!”
Artist Ruairi Coleman says, “Having done some work for Dynamite in the past, I’ve really been wanting to get my foot in the door here for a long time so I can play in the sandbox of the amazing licenses they have. Chief among those, and high up on my bucket list, is Army of Darkness: Hail to the king, baby! So, when I was offered the job of drawing the KISS/Army of Darkness crossover, I couldn’t believe my luck! The concept is totally bonkers, but in a way, that would make complete sense in the world of Army of Darkness. Thinking about it, I’m surprised it hasn’t been done already and I’m honored (and more than a little intimidated) to be the guy who draws it.”
“After a more than 40-year career, KISS continues to be one of rock’s most celebrated bands, while Army of Darkness continues to be a staple in the comic book industry. We’re both honored to have the opportunity to work so closely with Gene and Paul to bring their world-renowned alter-egos to comics alongside our very own Ashy Slashy,” says Nick Barrucci, CEO and Publisher of Dynamite Entertainment. “The raging guitar chords and pyrotechnic spectacle of their stage shows could have come straight from the pages of the Necronomicon, and this epic battle between The Demon and Deadites will appeal to the hellions in all of us!”
As America’s #1 Gold Record Award winning group of all time (and that’s in every category), KISS can easily be named one of rock’s most influential bands. The Rock N Roll Hall of Famers have released 44 albums and sold more than 100 million albums worldwide. The origins of KISS comic books date almost as far back as the inception as the band itself, having been an integral part of comics culture since their 1977 appearance in Howard the Duck #12 and 1978’s Marvel Comics Super Special: Kiss. Today, nearly 40 years later, Dynamite Entertainment is the proud home to the comic book series KISS, KISS: The Demon, KISS/Vampirella, and now KISS/Army of Darkness.
Army of Darkness is a 1992 fantasy/comedy film with strong horror elements starring Bruce Campbell (Burn Notice), the third installment in a trilogy featuring reluctant hero Ash Williams. Directed by Sam Raimi (Spider-Man), the film saw its tough-as-nails, wise-cracking protagonist transported from the modern era to the Dark Ages in his continuing war against demonic evil. Army of Darkness generated a dedicated fan following for its premise and lead actor. Since 2004, Dynamite Entertainment has been the proud home to Army of Darkness comic books.
The debut issue of KISS/Army of Darkness features a wide selection of cover variants, providing fans and retailers with the freedom of choice! Three art covers feature the talents of Kyle Strahm (KISS: the Demon, Army of Darkness/Xena Warrior Princess: Forever….and a Day), Goni Montes (KISS, SwordQuest, Mighty Morphin Power Rangers), and Ken Haeser (KISS: the Demon, Ash vs the Army of Darkness, Hatchet), respectively. XXX limited variant editions in “Black & White” and “Virgin Art” formats are also available as retailer incentives for comic shops that support the launch issue by achieving stocking thresholds.