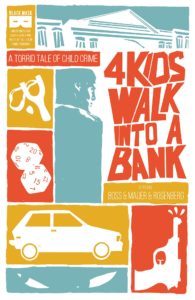 4 KIDS WALK INTO A BANK is the darkly comedic story of four burgeoning child criminals and their elaborate plans.When a group of bumbling criminals show up in her father’s life looking to pull one last job, young Paige has two choices — let her father get caught up in their criminal hijinks or enlist her three best friends to do the job first. Paige picks the bad one.180ish pages of full color comic-booking about friendship, family, growing up, and grand larceny from rising star writer Matthew Rosenberg (WE CAN NEVER GO HOME, KINGPIN, SECRET WARRIORS) and equally rising star artist Tyler Boss (LAZARUS, CALEXIT, Vice Magazine). This volume collects the complete series that Kieron Gillen (THE WICKED + THE DIVINE, DARTH VADER) described as “Imagine Tarantino does Goonies. And excellent.” And Brian K. Vaughan (SAGA, Y THE LAST MAN) said was “Exploding with ambition and love of the medium!”
———-

What do a group of your average every day kids, ages 11 to 12, do when faced with the very real threat of danger? What do they do when they find themselves face to face with a group of violent criminals? How do they react when they learn about a plot to rob a bank? If they’re reasonably well adjusted, they tell their parents and then lock themselves in their homes until the danger goes away, and this would be a very short trade paperback. Thankfully, Paige and her friends aren’t average, or anywhere near well adjusted, because what happens here is akin to something Quentin Tarantino might’ve come up with if he were looking to reboot The Goonies (interestingly enough, one of the alternate covers mashed the book up with the movie poster for Reservoir Dogs).

(Also interestingly enough, I made that Tarantino connection before reading the publisher’s blurb and Kieron Gillen’s comment… too late to the ball, story of my life)

As these stories tend to do, we’re introduced to our juvenile group of antagonistic protagonists in the middle of a tabletop roleplaying game (for trademark related purposes, the game is absolutely NOT Dungeons & Dragons). During the game, we meet Paige- the ringleader of the group and something of a hellion, “Stretch”- the abnormally tall tech genius, Walter- the soft-spoken and mild-mannered chemistry whiz, and Berger- the… well he’s pretty much just Berger… no one actually invites him to any the friends’ gatherings, but he manages to show up anyway.

As the game is breaking up (Berger dumped a two liter of soda all over the table, flooding the kingdom and knocking heroic miniatures all over the place), there’s a knock at the door. Paige opens it and finds a crew of newly released from prison ne’er-do-wells standing there, asking if her father is home. Not one to mince words or take any guff, Paige starts a verbal altercation with the group that ends when Berger uses a slingshot to launch a miniature troll (absolutely NOT a troll as portrayed in any previously copyrighted material…) into the eye of one of the toughs.

Things spiral into chaos and anarchy from there.

The prevalent theme of family and friendship holds steady at the core of the series from start to finish. Even as far as Berger’s concerned, although no one really admits that they like him (he’s kind of a shit), his presence among the group ensures his status as “one of us”. Matthew Rosenberg gives each kid a sharp and distinct personality, staying away from overused tropes even though the kids do seem just familiar enough to let readers get acquainted and invested early on. The dialogue between the kids, and some of the adults who have to deal with them, is often hysterical and always sharp. If you’ve read any of my reviews, it won’t come as a shock that I hold well-written dialogue up on a pedestal because it really is the toughest aspect of writing. Rosenberg does it very well, balancing the visual aspect of the comicbook with his work so that the reading doesn’t bog down the artwork.

Hey, speaking of artwork, I think I should say something nice about Tyler Boss. Another aspect of comicbooks that I really hold up as a virtue comes in the character designs. Boss gives each member of the 4 Kids cast a look as distinctive as you could ever hope to find. Tomboy Paige is generally pretty disheveled, with a definite “wildchild” look. Her friend Stretch is all lanky limbs and ears, just waiting for that growth spurt that’s going to even things out for him. I could go on, but that would take some of the fun out meeting these characters for yourself. I will say that the other area where Boss excels is in facial expressions. He puts more character into a single look than some writers can manage with pages worth of dialogue. I’m thinking in particular of a conversation between Paige and Berger in Chapter 2, where Paige says that she’s doing a report on “LBJ”, prompting Berger to give a confuse look and ask “You have a report on peanut butter and jelly?” The next panel is just Paige, head quirked to the side, looking like she’s trying to figure out a complex equation before deciding that it’s just Berger. Moments like this are gold in the comicbook medium, and there are plenty like it in 4 Kids.

Also a major factor in nailing the feel of the book is Thomas Mauer, that unsung hero of the comicbook medium, the letterer! In many books, the lettering is almost an unnoticed thing, taken for granted and existing on its own. In many cases, that’s actually not a bad thing. Lettering done wrong can be a distraction if it’s taking too much attention from the rest of the work. In 4 Kids, the letters laid down by Mauer go a long way toward establishing characters and comedic beats… and let me assure you, the farther along you get, the more important those beats become. Through the use of odd captions pointing out points that may not be all that important to the plot, but do set the tone for a given scene, Mauer is able to slip in like a friggin ninja and right back out again before you even realize that he’s been there.

I’d be neglecting my duties as a reviewer and previewer of comics if I didn’t point out that 4 Kids Walk into a Bank wasn’t all fun and games. I mean, there are fun and games (some old school rpg’s, a couple video games, etc.) but this is, in the end, a story about a group of pre-teens robbing a bank. If it was a story from Richard Donner or Stephen Spielberg, you could be sure that everyone comes out of the caper unscathed. Since this is more like something written by Guy Ritchie or Quentin Tarantino, there’s plenty of scathing to go around, and the story does have some darkness to it.

Overall, it’s a very well-written, well-illustrated bit of work, and the timing for a collected trade edition couldn’t be better. With audiences craving more stories mixing precocious kids into more complex plotlines (think Stranger Things, and It, but with crime instead of killer clowns and extra-dimensional beings), 4 Kids Walk into a Bank should find a place in that niche. 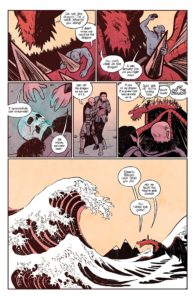 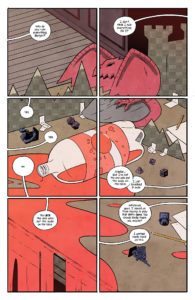 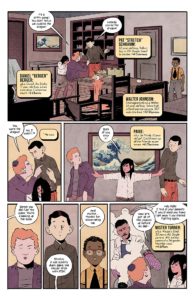 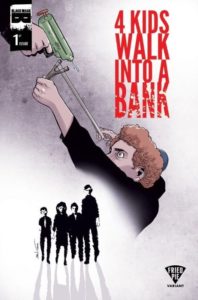 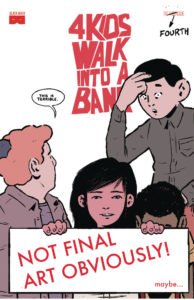