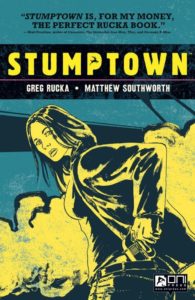 Join the investigation on Dex Parios’s first case for just $10! Dex is the proprietor of Stumptown Investigations, and a fairly talented P.I. Unfortunately, she’s less adept at throwing dice than solving cases. Her recent streak has left her beyond broke―she’s into the Confederated Tribes of the Wind Coast for 18 large. But maybe Dex’s luck is about to change. Sue-Lynne, head of the Wind Coast’s casino operation, will clear Dex’ debt if she can locate Sue-Lynne’s missing granddaughter. Is this job Dex’s way out of the hole or a shove down one much much deeper?
———-

Meet Dexedrine C. Parios- “Dex” to her friends and acquaintances- private investigator, compulsive gambler, and kind of a smart ass. With a debt that dwarfs Dex’s bank account, casino owner Sue-Lynne Suppa has proposed a bargain: If Dex can find her missing granddaughter Charlotte, she can consider her debt paid in full. With work kinda slow for a P.I. in Portland, Oregon, it’s a bargain Dex can’t pass up. However, it gets to be pretty obvious, pretty quickly, that this isn’t going to be an easy in and out for the struggling investigator. Other interested parties are looking for Charlotte, and not all of them have the girl’s best interest in mind.

Stumptown is one of those seldom seen “white buffalo” kind of stories that you wouldn’t generally expect to find in a comicbook. A modern crime noir set in the Pacific Northwest, it’s full of twists and turns, suspects both likely and not, and more quips than you can shake a loaded pistol at. Lending the whole thing a bit of weight, many of the sites featured in the pages of Stumptown may not be likely to show up in a brochure from the department of tourism but can be found in a quick Google search. Example? Look up the Ringside Steakhouse, Portland’s “upscale old-school place for steaks and chops”, and you’ll find the setting of a pretty significant turn in Dex’s investigation. I have no doubt that if a reader were so inclined, he or she would be able to look up most, if not all, of the locales featured in the pages of Stumptown, cementing this as a crime story firmly rooted in the real world.

This is the kind of work that Greg Rucka excels at. He grounds his writing in real places, real situations, filling it all out with characters who look and act like people you’d meet at one of the local dive bars. Dex may not be your average P.I., but she pursues her mark with the tenacity of a bull terrier, and faces the obstacles in her path with the attitude of Joe Hollenbeck (Bruce Willis’s snarky detective in The Last Boy Scout). She may take a few lumps as a result of her mouth, but it never slows her down or distracts her from her path. In fact, it’s almost like Dex doesn’t feel like she’s on the right track unless someone’s taking a swing at her or issuing thinly veiled threats- tissue paper thin- to warn her away.

As flawed as Dex is, she’s got her merits as well. That very real world concept goes for many of the characters in Rucka’s writing. Seldom in life do we run across someone who’s either squeaky clean good or world conquering evil. Truth be told, most of the people he’s brought together for Stumptown ring that much closer to real simply because Rucka has invested them all with traits both good and bad, usually in equal measure. Readers of Rucka’s previous works (Lazarus, Black Magick, Queen & Country, and multiple Batman titles to name a very few) are going to have a pretty good idea of the grit and wit to be expected in Stumptown.

Sorry, I don’t have a better transition from writing into illustration, so I’m just gonna have to say, boy that Matthew Southworth sure can draw! I’ve mentioned Stumptown’s settings, and the heavy reliance on real world locales and backdrops that the story takes place in. None of that would work if Southworth, with backup from Lee Loughridge & Rico Renzi on colors, wasn’t able to give his backgrounds the attention to detail they need without overshadowing the action going on in the panel. For example, the aforementioned steak joint… I had to zoom in on the sign (page 40) to be able to make out the name of the place, and only then did it occur to me to look the place up. When I did, I was happy to discover that the place not only exists, but also that both external and internal shots were obviously used for reference in the scene. But it’s all done so that the setting doesn’t drown out the characters. As solid as Southworth’s work is, I’m going to say that the backgrounds benefitted most from the coloring of Loughridge & Renzi.

The characters. In a style somewhat similar to the work of David Aja (Hawkeye), Southworth nails both the tone of Rucka’s story and the attitudes & actions of the characters. While there isn’t a whole lot of typical comicbook action going on, what is happening on the page works just as well in the storytelling aspect as anything written. In the quieter moments, the story continues to unfold through the expression on Dex’s face, in her posture. In the pause before she delivers some insulting verbal jab, I could almost see her considering the cause/effect ramifications of what she was thinking, and deciding that whatever happened would be totally worth it.

Stumptown is a great example of what a writer/artistic team can accomplish when they’re operating on the same wavelength. Rucka, a best-selling author recognized in the world of both comicbooks and novels, is impressive for what he’s written, and for what he’s left unsaid. Southworth, Loughridge, & Renzi have left their mark by picking up on what isn’t said, and communicating it visually. My final word is that this was a title I was sorry to have missed in single issues, but one that I was more than happy to catch up with in its latest collected trade release (single issues available for $1 each, trade edition for $10). 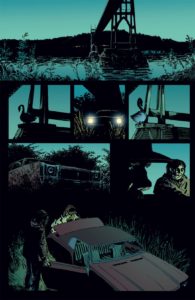 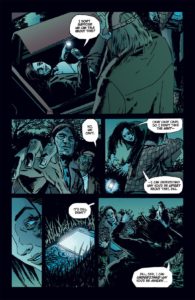 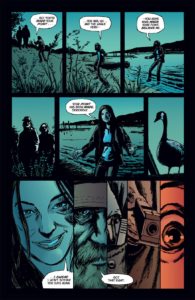 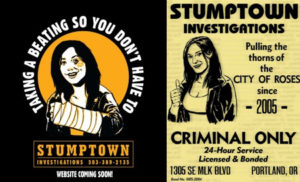