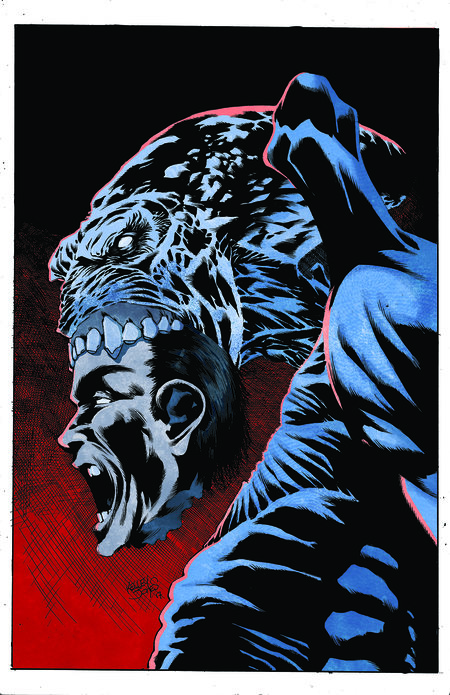 Dynamite Entertainment is proud to announce their new agreement with Metro-Goldwyn-Mayer Pictures to develop original comic book projects based on the cult classic Pumpkinhead film franchise. The ever-talented Cullen Bunn (Deadpool, Micronauts, Monsters Unleashed) has been tapped to serve as writer for the terrifying horror tale, slated to hit shelves in February 2018.

In the original Pumpkinhead film, a group of teenagers inadvertently kill a young boy in rural Appalachia, and his father seeks the powers of a backwoods witch to bring the child back to life. Instead, she invokes The Pumpkinhead – a monstrously clawed demon which, once reborn, answers only to Harley’s bloodlust. As the creature wreaks its slow, unspeakable tortures on the teens, Harley confronts a horrifying secret about his connection to the beast – and realizes that he must find a way to stop its deadly mission before he becomes one with the creature forever. A “vivid, stylish, atmospheric” film as described by The Hollywood Reporter, the Pumpkinhead film features a hypnotic, heart-rending performance by Lance Henriksen and the directorial vision of special effects master Stan Winston, and spawned three sequels.

“I watched Pumpkinhead on opening night in a little two-screen movie theater outside Berkeley Mall in Goldsboro, North Carolina,” says writer Cullen Bunn. “To say it helped cement my love of horror (and, in particular, ‘rural horror’, which I write a lot of these days) would be an understatement. I can recite the poem from memory. I even play the soundtrack while writing my own stories. The pacing, the eeriness of the setting, the interplay of weird light and shadow. These are all elements I hope to capture in the comic. As a longtime fan of horror, I hold this movie in high regard, and I couldn’t be more thrilled to be contributing to the backwoods mythos of Haggis and Bunt Wallace and the Demon of Vengeance his own self.”

Cullen Bunn grew up in rural North Carolina, and now lives with his wife and son in the St. Louis area. Over the years, Bunn has worked several odd jobs, including Alien Autopsy Specialist, Rodeo Clown, Professional Wrestler Manager, and Sasquatch Wrangler, before serving as a Career Consultant, Product and Project Manager, and Director of Marketing. Bunn began writing full-time writer in 2011, and has worked on several comic book series and graphic novel projects for Marvel, DC, Oni Press, and Dynamite Entertainment, including The Sixth Gun, The Damned, Fearless Defenders, Deadpool, Venom, Wolverine, and Spider-Man: Season One. In addition, Bunn has written many short fiction stories and novels including Crooked Hills, as well as his collection of short horror fiction tales, Creeping Stones & Other Stories. His short stories and non-fiction have appeared in dozens of magazines, anthologies, and e-zines.

“The 1980s was a renaissance for horror films, introducing thrill-seeking audiences to so many iconic murderers and monsters. Pumpkinhead is not only one of the most visually terrifying of the breed, but also one of the most tragic – it’s the very definition of a Revenge Tragedy,” says Nick Barrucci, CEO and Publisher of Dynamite. “There’s a human story to it that affects us so deeply, so profoundly – how grief can unlock an insatiable darkness within even the noblest person. Dynamite’s proud to resurrect this demon of vengeance, to explore the murky depths of the human soul in all-original comics, coming soon!”

Dynamite Entertainment, one of the leading comic book publishers of licensed properties, is a home to dozens of fan-favorite horror projects. Beginning with Army of Darkness as their debut title in 2004, Dynamite has since created original expanded content for such film, television, and literary properties as Z Nation, Dark Shadows, Darkman, Dean Koontz’s Frankenstein, Kevin Smith’s Yoga Hosers, Centipede, ReAnimator, Dracula, and Alice Cooper (just to name a few). The company also owns and publishes the extensive Vampirella and Chaos Comics libraries of original horror comic book characters.