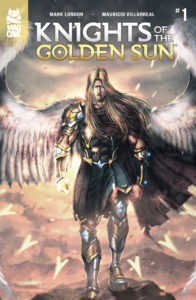 Four hundred years separate the Old Testament from the New Testament, during that time, neither man nor angel could hear God’s divine message. In His absence, an age of chaos began. With humanity at the wayside, a power struggle erupts among the Archangels over who will control Father’s throne.
———-

Once upon a time way back in 1025 B.C., a young shepherd tends his flock, defending them against all threats. He grows into a man and a leader of men, broadening his definition of “flock” while making all of the mistakes men have made since- ironically- the dawn of time. Years later in 4 A.D., a young couple arrives in town looking for a place to stay. It being a particularly busy time, they’re forced to make do with whatever space they can find, and during the night they miraculously bring a baby into the world.

These aren’t new stories. Regardless of beliefs, it would be a rare person indeed who’s grown up without hearing them as either gospel or myth. What makes Knights of the Golden Sun a little different is that these stories, as large and significant as they may be, are just the backdrop. From David’s fight against Goliath to Mary and Joseph’s night spent in a stable, these events have been relegated to mere bookmarks in history as we’re offered the same stories told from a different point of view… that of the angels.

As the events that would someday comprise what we would come to know as The Bible unfolded, the angels were engaged in an ongoing battle, some looking to serve while others were determined to rule. Lucifer. Michael. Raphael. Gabrielle. They’re the focus of the new fantasy title coming out of the Mad Cave, and it looks like they’re really trying to earn the adjective of “epic”.

Mark London, who should really think about taking a time out… or maybe giving someone else a chance at writing a little bit… is once again putting proverbial pen to figurative paper as the writing talent behind the Golden Sun. While the story spans a pretty lengthy time frame (do the math), London moves it along pretty quickly. Maybe too quickly for some as we’re introduced to Lucifer and Michael and Raphael and Gabrielle and… quite a few people… after the “Fall”, and it’s explained that for one reason or another, God has chosen to go on a walkabout right in the middle of the conflict. He’s left the angels in charge of keeping humanity safe and on the straight and narrow path, and to keep Lucifer and company from raising too much hate and discontent.

Might not be the call I would’ve made, but who am I?

Anyway, it becomes pretty plain to see that while Michael does his best to bring the former Morningstar back into the fold, fledgling Devil Lucifer isn’t the least bit interested. Still, the angels have been given their marching orders, to allow humanity the chance to live and grow without direct interference (giving that pesky free will a try), and to keep them safe from Lucifer’s influence. Michael and Raphael do their best to comply, but it’s Gabrielle who throws the wrench into the works when she decides that the good guys can’t hope to win if they’re hobbled by the same rules that Lucifer’s forces can ignore at will.

As always, Mad Cave brings the visuals, thanks this time around to the hand of Mauricio Villarreal. His artistic style lends itself very well to a world of battling angels and demons… all glowing swords, suits of divine armor, and mountain leveling lightning strikes, Villarreal’s work alone could make this book worth its cover price. The only problem I ran into with the art was in differentiating some of the characters by facial features. But, I suppose they’re angels… how many different ways can an artist try to represent perfection? On the plus side, the action is dynamic and well-managed, although I can’t imagine why anyone would turn their back on Lucifer in the middle of a fight (for an archangel, Raphael’s kinda dim).

Knights of the Golden Sun is off to a good start, introducing the important players in what could be an epic story of loyalty and betrayal. In fact, it’s pretty much the original story of loyalty and betrayal, no matter what George Martin thinks. We’ll see if Mark London can slow the pace down a bit, now that he’s brought us through the first thousand or so years of angelic infighting, and if Mauricio Villarreal can continue bringing the awesome visuals to the page. 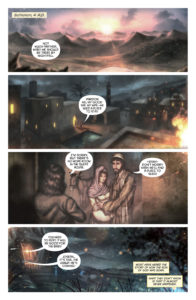 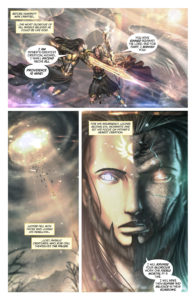 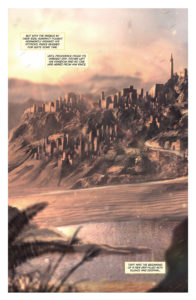 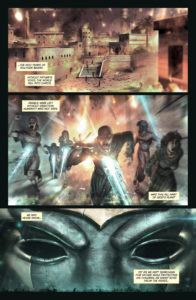