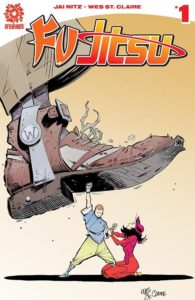 Fu Jitsu is the world’s smartest boy, and has been for the last hundred years. Wait, what? Fu is an un-aging genius, and has had adventures around the globe and around the galaxy. From Einstein and the Wright brothers, to Gandhi and Johnny Unitas, Fu has met everyone in history while protecting Earth from Robert Wadlow, the world’s tallest man, and his dangerous magi-science.

Fu exiles himself to Antarctica to try and forget the painful breakup with his ex-girlfriend, Rachel. Meanwhile, Wadlow returns from the far-flung future and sends James Dean, his ultimate assassin, to kill Fu at the South Pole. And you thought your teenage years were tough?

Born in Guam in the summer of 1897, master of the most esoteric of esoteric martial arts and connoisseur of Whataburger’s finest fare, the man known as Fu Jitsu has the look of a teenager but has lived longer and experienced more than most would ever consider. He continues a search for enlightenment as he tries to harness the power of the elements with his Sub-Atomic Kung Fu. Meanwhile, as Fu spends three years in deep, deep meditation, the nefarious machinations of the evil Robert Wadlow have come to fruition. Wadlow has been plotting and scheming since before World War II, and has finally claimed his prize… the Atomic Katana!

Only one question remains to be answered- How the hell does James Dean fit into all this?

To call Fu Jitsu “quirky” would be akin to gazing out over a majestic rain forest and saying, “Hey, check out that tree.” Equal parts martial arts epic, pulp adventure, and coming of age odyssey, the tale of the boy/man named Fu has all the markings of a solid romp. If I were to make a comparison, I’d say that this title reminded me of the first time I read Atomic Robo by writer Brian Clevinger and artist Scott Wegener.

The left-of-center creation of Jai Nitz and Wesley St. Claire, Fu Jitsu has the makings of an all-around good time read. As written by Nitz, the eternally teenaged Fu comes across as a fully realized character, complete with a love of the Colts and hamburgers from Whataburger, and a history of heart break. Likewise, Nitz presents the world around the bizarre cast of characters with its own backstory, which kinda sorta resembles our own, with a few minor twists.

Wesley St. Claire, co-creator and artist on the title, has likewise given his title a distinctive tone and attitude. The characters all have their own look and “feel”, and the only people who come across as generic henchmen are the… well, they’re pretty much generic henchmen in the employ of evil Wadlow. He all but refers to them as “Thug 1” and “Thug 2”, and St. Claire has still taken the effort to give them each their own features… think Cruella Deville’s goons from 101 Dalmatians.

As far as opening issues goes, Fu Jitsu does a good job of introducing an interesting and entertaining cast of characters and the world they live in. As it moves on, I’m looking forward to seeing how it all develops, and who else shows up for a guest appearance. 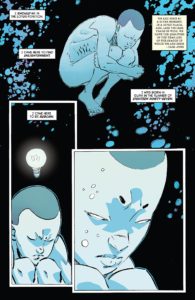 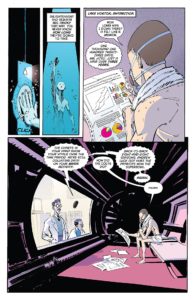 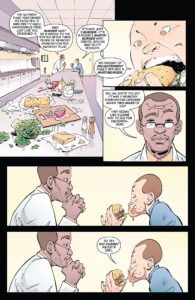