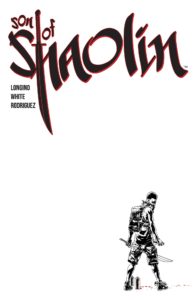 A kung-fu epic set in the back alleys and subway tunnels of Harlem, New York. Kyrie, an aspiring street artist who is struggling to make ends meet, learns that he is the last living descendant of a secret sect of ancient Shaolin elders. Confused and unsure of where to turn, he finds a father figure in the mysterious Master Fong. Fong trains Kyrie in martial arts in anticipation of an attack from Red Fist, a relentless killer who has already murdered the rest of Kyrie’s bloodline. Introduction by AISHA TYLER. Film rights recently sold to Sony / Columbia Pictures with DWAYNE “THE ROCK” JOHNSON attached to produce.
———-

I’ve had a long standing love for the classic Kung Fu movies of the 70’s & 80’s. I’ve probably seen most of the flicks put out by the Shaw Brothers, starring legends like Ti Lung and Alexander Fu Sheng. One thing that becomes very clear is that most of those movies follow a pattern… an outline that links them all together into a specific theme. It usually goes something like this:

The young everyman, or maybe he’s already a moderately skilled student in a Kung Fu school, runs afoul of an evil overlord/rival Kung Fu student/oppressive regime. He sets out to learn the penultimate martial art style so that he can right the wrongs of the world or avenge the death of someone. Or maybe he just wants to get the girl. Whatever. Inevitably, this young stalwart learns a bit, becomes convinced that he’s ready to take on the forces of evil and sets out against his teacher’s advice. He confronts his nemesis, and predictably gets his ass soundly kicked. Lather. Rinse. Repeat… hopefully next time with better results, maybe even paying a little more attention to his teacher’s advice.

See, kids? Sometimes your elders do know a thing or two.

I don’t care how many times I saw the same story told, with different actors playing the parts (except for the bad guys… they were almost always the same). Every movie was special, each having something that made them stand out regardless of how closely they followed the formula, and I watched them over and over again. Nowadays, though, these movie classics might be a little tougher to watch. The choreography could be a little dated, and the special effects are… Y’know what, it doesn’t matter. The Shaws and their team of actors and crew were putting out a movie a week, at least, and they did the best that they could with what they had.

What’s important is that the spirit of those old movies lives on in the pages of Son of Shaolin, a graphic novel from Image Comics. The brainchild of creator/writer Jay Longino, Son of Shaolin follows in the grand footsteps of those awesomely cheesy wuxia films of old. Early on, we’re introduced to young Kyrie, a graffiti artist living in Harlem. He’s been on his own his entire life, a ward of the New York foster system who never knew his parents. From there, it’s only a matter of time before he discovers that he’s one of the two last descendants of the Five Elders, forebears of a long line of Kung Fu masters. The other descendant, the vengeful Red Fist has traveled the world to track down and kill four of the masters in single combat, and has his sights set on the fifth so that his plans can be realized.

Or course the fifth, Master Kwan of the Tiger style, is Kyrie’s father. He’d left Kyrie hidden away, an anonymous foster child among the many thousands of children floating around the system. This wasn’t done out of cruelty or indifference, but because he knew that someday his enemies would come looking for him and his progeny. Never very far away from Kyrie, Kwan had taken to the streets at night, patrolling and fighting crime as the Harlem Tiger until Red Fist found him. Now Kwan’s power has been passed on to Kyrie, the next in line, to be discovered and trained before Red Fist finds him.

Wow, that all sounds serious, doesn’t it? In keeping with the high drama of the wuxia films this comic is a loving homage to, with its high drama and fantasy elements, Longino has embraced the stylized violence and themes of good vs evil with open arms. This story is adapted to the modern setting, mainly in the New York City neighborhood of Harlem, and does a great job of using the new contemporary setting to its advantage. While some of the corniness is gone, brushed over with a fresh coat of paint to bring it more in line with modern storytelling, Son of Shaolin is still unmistakably Kung Fu Theater at its finest. Sure, the character arcs may be a little accelerated to fit into the format of a single graphic novel, and some of the side characters may come across as little more than filler to provide Kyrie with the motivation he needs to move forward, but at its core Son of Shaolin is a story about two people. Um, maybe three, but that’s it. By the time the final act rolls around, the relatively straight line plot swings around to a satisfying climax of good vs evil, in keeping with the stories in which its DNA is steeped. While it might’ve been nice to be able to take a little more time getting to know Kyrie and his friends, all can be forgiven once the action starts.

That action, rendered by the artistic team of Caanan White (art) and Diego Rodriguez (colors), is where the story shines. They instill action in their frames, without relying too much on blurs and “after images” (fans of the old Flash comics will know what that means), rather combining them both to good effect. More importantly, and this is something that matters to fans and practitioners of the martial arts, White uses traditional stances and maneuvers that flow across the page. His characters aren’t stiff looking or blown completely out of proportion, but look like he could’ve taken a trip to an actual Shaolin temple to get his reference material. Rodriguez colors the world, filling it out and giving it all depth.

I dunno, I might be a little biased on this one, but I thought Son of Shaolin was a great introduction to a world with roots deeply embedded in a classic form of action cinema. Now I’m keeping my fingers crossed for the next installment, but until then I might have to see what sort of Kung Fu flicks Netflix has to offer. 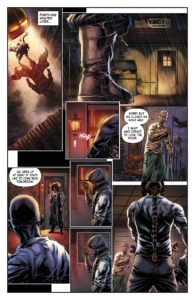 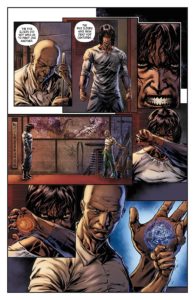 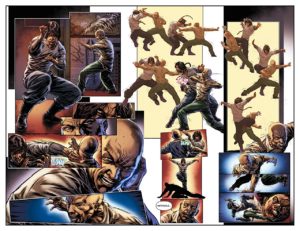