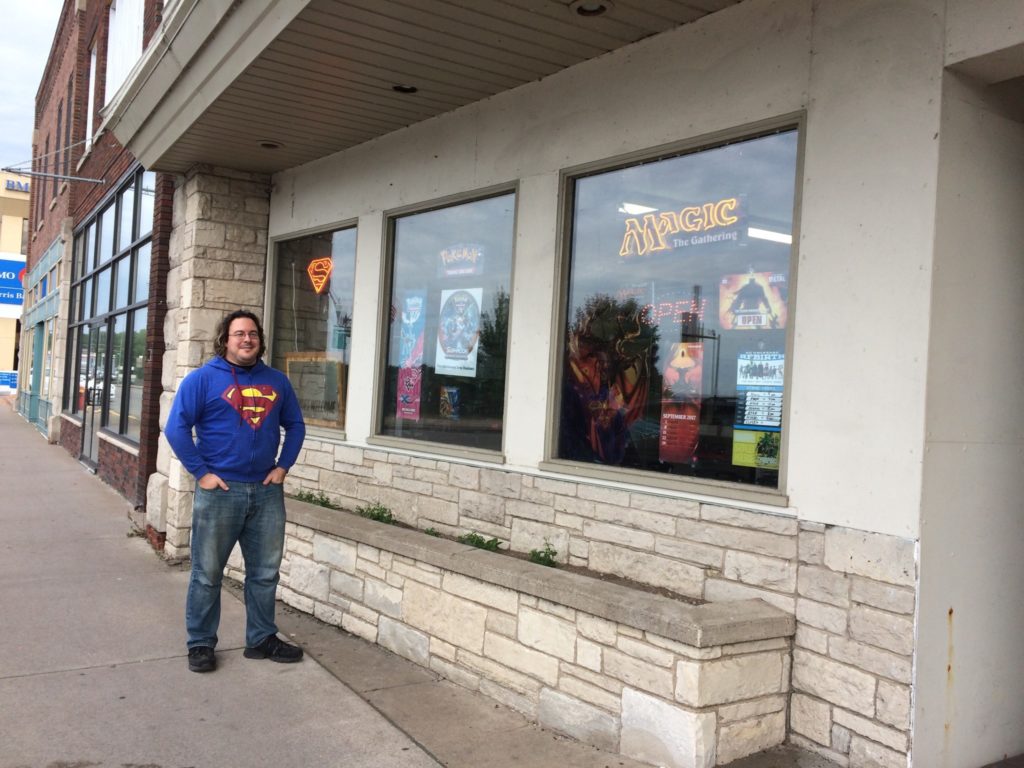 One of my favorite activities to do with my daughters is biking around our town–Menomonie, Wisconsin.  On Saturdays, we enjoy biking downtown and stopping along Main Street for coffee and snacks.  We were pleasantly surprised a couple of years ago when we came across Heroes Welcome, the new comic book shop in town located at 424 Main Street East.  Since then, we’ve made it a point to stop in every couple of weeks to check out the latest issues of our favorite comic books.   Store owner John Hansen has stocked the shelves with a nice mix of traditional titles from DC and Marvel, to newer, edgier series such as Kill Or Be Killed on Image Comics and Hard Case Crime’s Snatch.

Walking into Heroes Welcome, you’ll find a bustling hub of gaming activity.  College students gather multiple nights during the week for Magic the Gathering events.  The store has a wide variety of comics and even has a shelf dedicated to Erik Evensen, a local comic book artist and professor who has both self published work and has done the artwork for some Ghostbusters issues.  Not only that, but the store sells Magic the Gathering sets and booster packs and other board and trading card games.  You will also find an array of comics related collectibles, such as action figures and hardcover books.  Recently I stopped in to ask the store’s owner, John Hansen, if he’d be willing to be featured on The Pullbox.  He happily obliged.

Who first introduced you to comics?  When?

I’ve honestly been interested in comic books and superheroes for as long as I can remember.  When I was small I remember watching The X-Men, Spider-man, Batman, Iron Man, and Fantastic Four cartoons on TV.  I used to love to visit Schinder’s in Maplewood back when it was there.  I grew up in Hinckley, Minnesota, a long way from any comic book store but it was always a treat anytime my Mom visited the cities and I got to go to Schinder’s and get some new comic books or trading cards.

What were your favorite series when you were younger?

I grew up interested in mainly the Marvel superhero characters.  Spider-man and X-Men were among my favorites.  I also liked Batman though.  I liked colorful thematic characters, and you get a lot of that with each of those titles.

What have you been reading lately?

I enjoy offbeat comics especially ones with a sense of humor about them.  Marvel’s Unbelievable Gwenpool is a personal favorite. The Clue adaptation is quite enjoyable.  DC’s Doom Patrol from Gerard Way has been fun to read.  And Shirtless Bear Fighter was one that surprised me.  I’m looking forward to Marvel’s Venomverse mini-series.  I also like some of the darker titles like Ed Brubaker’s Kill or Be Killed or pretty much any of the Hard Case Crime titles

What are your thoughts on current storylines?  How do they differ from when you were younger?

As I kid I stuck to the mainstream titles, but now I’m reading much more diverse stuff.

How do you see e-comics transforming the genre?  Will there be paper comics in the future?

I hope there will always be paper comics.  I think there are many people, myself included, who prefer to actually hold the comic in their hands and own something tangible.  Comics are also collectables.  Digital copies are not at all collectable.  Digital copies are fine for the people who only want to read the story and appreciate the artwork, but, again, there are many of us who want to actually own a physical comic book.

What new comic series do you see pushing the boundaries of the genre?

That’s the great thing about comics, anyone can do just about anything they imagine.  There are a number of titles, especially from smaller publishers that continue to explore new and unique ideas or combine old ideas in fun and exciting ways.  IDW, Titan, Dynamite, Hard Case Crime, Boom!, Dark Horse, and Image are all great publishers if you are looking for something different from the mainstream.

Do you see comics as a legitimate art-form?  What touchstones in comics history have helped the genre gain credibility?

Absolutely comics are a legitimate art form.  In fact they are several art forms all in one.  They are storytelling, not just through the dialog and actions, but also through the visuals, staging, and framing of the images.  And they are, of course, artwork.  The different artists and writers who work in the comic book industry are each appreciated by many fans.  I think what has caused the genre to gain credibility are the different writers and artists who have taken the genre seriously and who have continue to use the medium to product quality work.  When someone tells a great story and audiences recognize that they also recognize the genre as legitimate.

Your store also sells graphic novels, board games, card games, and other collectibles…how do you decide what to put on your shelves?

What board game or trading card game is the most popular?  How does your store support that?

The most popular card game is Magic the Gathering.  We have 2 prerelease events planned for the new Ixalan set and expect a very large turnout.  We also host weekly Magic events such as Commander format on Monday nights, Modern format on Friday nights, and Standard format on Saturday nights.  Participants in those events can receive booster pack prizes, promo cards, and more!

What is your target market?  Do you see the love of comics and games trickling down into the younger generation?

My target market is anyone who shares the same passions I do.  I have customers of all age ranges and I’m always happy to see all the different people who are enthusiastic about comics and games.