Timed to coincide with the celebration of legendary heroine Barbarella’s 55th anniversary, Dynamite Entertainment is pleased to announce that the iconic character’s first-ever American comic series, and first new comic series in more than 35 years, is now set to feature the critically-acclaimed artistic stylings of Turkish artist Kenan Yarar (Hilal). Yarar joins writer Mike Carey (X-Men, Lucifer, The Girl with All the Gifts), and longtime Barbarella brand custodian and consulting editor Jean-Marc Lofficier, on the revolutionary new series slated for release this December!

“When I was first told of Dynamite Editor Matt Idelson’s Barbarella project, I thought it was fascinating,” says artist Kenan Yarar. “Even though Barbarella is unruly, bold, attractive and sexually appealing, she wasn’t objectified and she has a strange universe that may lead to countless eccentric worlds. The thing that compelled me to absolutely take part in this project was reading Mike Carey’s script. The script was masterful and enjoyable in addition to having a solid philosophy and subtext to be the answer if someone bothered to ask me what kind of a comic book I’d like to work on as an artist. Also, the script demanded costumes, weapons, ships and worlds to be redesigned; the kind of work I delight in. I hope to present the script and Barbarella to Dynamite readers as fine and sophisticated as they truly are.”
Kenan Yarar was born in 1970 in Kayseri, Turkey. When he was one-year old, Yarar’s family moved to Istanbul where he continued his formal education through high school. At that point, he willingly decided to cease his formal education since it was weary and inadequate for his artistic and penciling skills which were already noticed. Yarar looked at several media to channel his art. Although he got many jobs as a graphic designer and cartoonist, his sequential art tendency was noticed by comic book masters in every newspaper he worked at. Yarar got almost all the support and sequential art training at that era in his life. When he was 21, his comic works started to be published in small magazines. Soon after that his stories and art style caught interest and along with increasing sales trend for monthly and weekly publications he started to regularly create comic work.  The most important character created by Yarar is Hilal, a beautiful and rebellious girl with school problems which has the devil stalking her ever in disguise. He also penciled short stories and Tales of Psychosis in which he illustrated dark stories of urban life and urban people dramas and absurdities. Kenan Yarar has been writing and illustrating comic books regularly for the last 25 years. He lives in an apartment which he uses as a home studio and shares it with a crow, a pigeon and a cat.
Created by Jean Claude Forest in 1962, Barbarella was introduced at the heart of the Sexual Revolution, and is forever ingrained in pop culture after Jane Fonda’s unforgettable portrayal in the 1968 cult-classic film. She was a key figure in the fertile battleground of French comic books and the struggle for sexual freedom in the medium, and has not appeared in a new series since her last appearance in the legendary science fiction publication, Heavy Metal.
“I’m really excited to be working with Kenan Yarar,” says writer Mike Carey. “He’s an artist with an exuberant, dazzling, playful style that’s perfect for the book – and he’s a great collaborator, always coming up with left-field solutions to narrative problems.”
“I am delighted with the selection of Kenen Yarar, says Barbarella consulting editor Jean-Marc Lofficier. “His preliminary sketches have shown both a spirit and a style that brings a new life into the character; it is faithful without being imitative.”
“The first time I saw Kenan’s art, my jaw just dropped,” says Matt Idelson, senior editor for Dynamite. “His work is extraordinary, and it straddles an impossibly fine line between the utterly fantastical while staying grounded and keeping you in the story.  The level of detail and thought he brings to everything he draws, be it from the real world or the world of the imagination is remarkable.  I knew he had to draw the book from that first moment.”
“We are extremely proud to not only be the first publisher to bring the iconic character back to print in more than 35 years, but to be the premiere American publisher to have the honor in Barbarella’s history,” says Dynamite CEO/Publisher Nick Barrucci.  “To be able to work together with the incredible talents of Mike Carey, now combined with the artistic brilliance of Kenan Yarar, we’re certain we’ve brought in the perfect team to do her legacy justice.  I cannot thank Jean-Marc and the estate enough for bestowing this honor on us.”
Dynamite Entertainment first announced the return of Barbarella to comic books in October of 2016, welcoming the sci-fi icon to their stable of strong female heroines alongside Red Sonja, Vampirella, Sheena, Dejah Thoris (of Warlord of Mars), and more. In July 2017, Dynamite Entertainment announced visionary writer Mike Carey would helm the new series, to rave review! In addition to this original comic book stories, Dynamite plans to develop Barbarella in further categories which include potential art books and 3D figurines.
Barbarella will be solicited in Diamond Comic Distributors’ October 2017 Previews catalog, the premier source of merchandise for the comic book specialty market, and slated for release in December. Comic book fans are encouraged to reserve copies of Barbarella #1 with their local comic book retailers. Barbarella #1 will also be available for individual customer purchase through digital platforms courtesy of Comixology, Kindle, iBooks, Google Play, Dynamite Digital, iVerse, Madefire, and Dark Horse Digital. 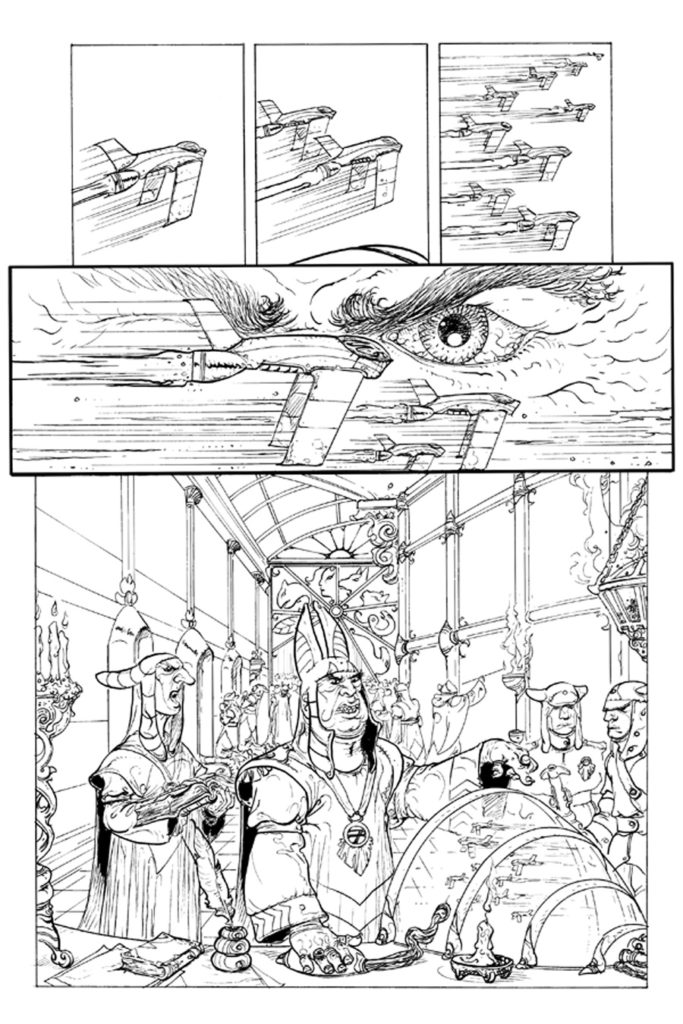 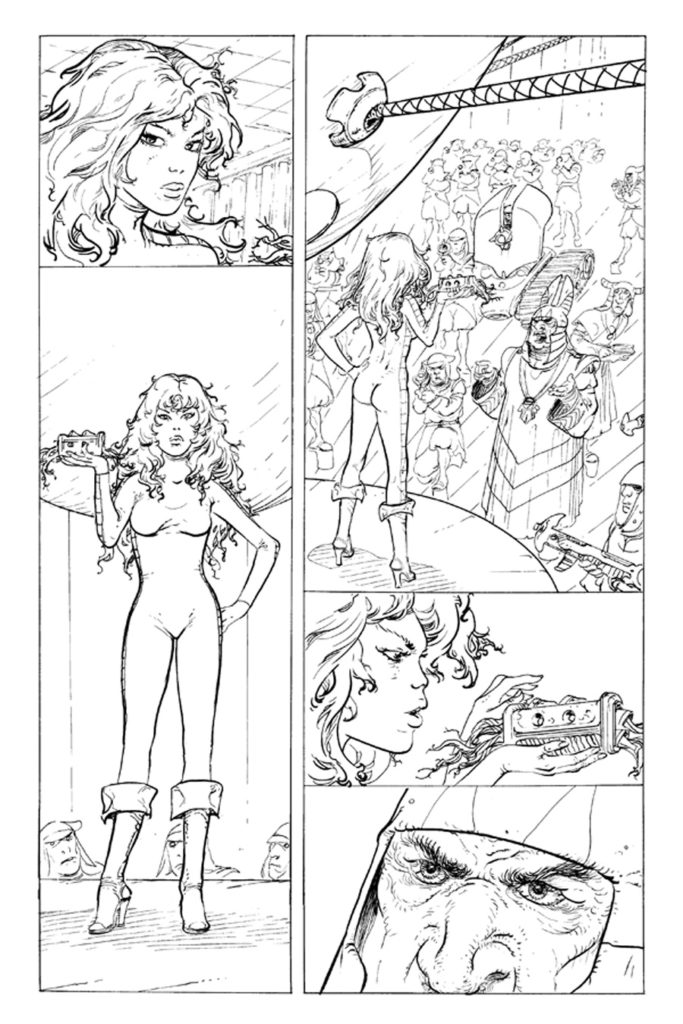 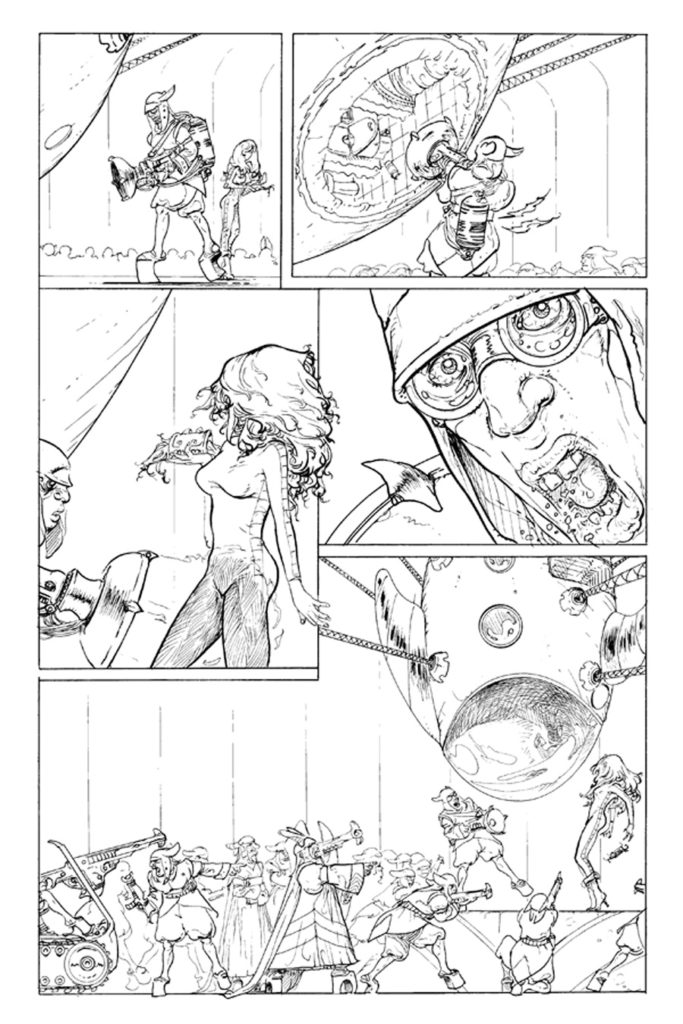 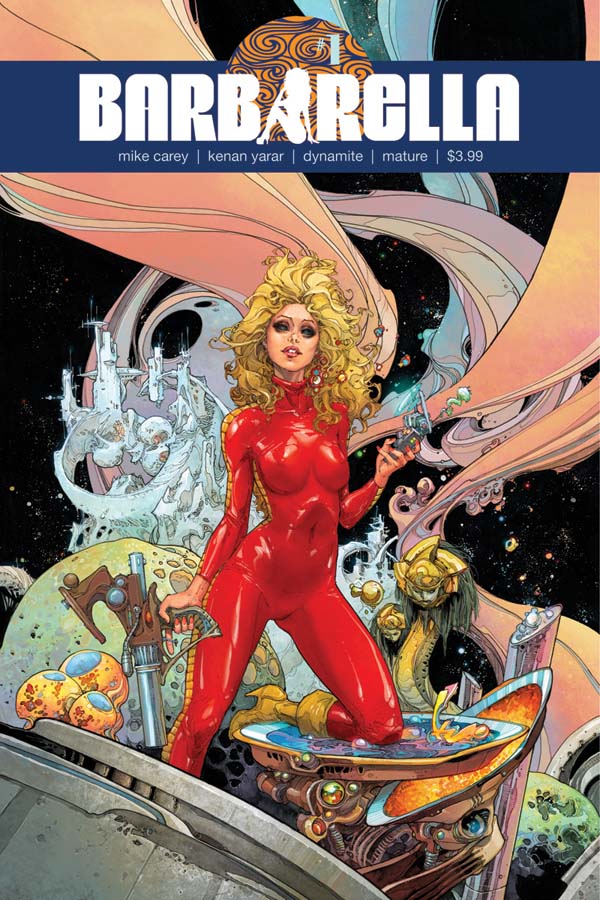 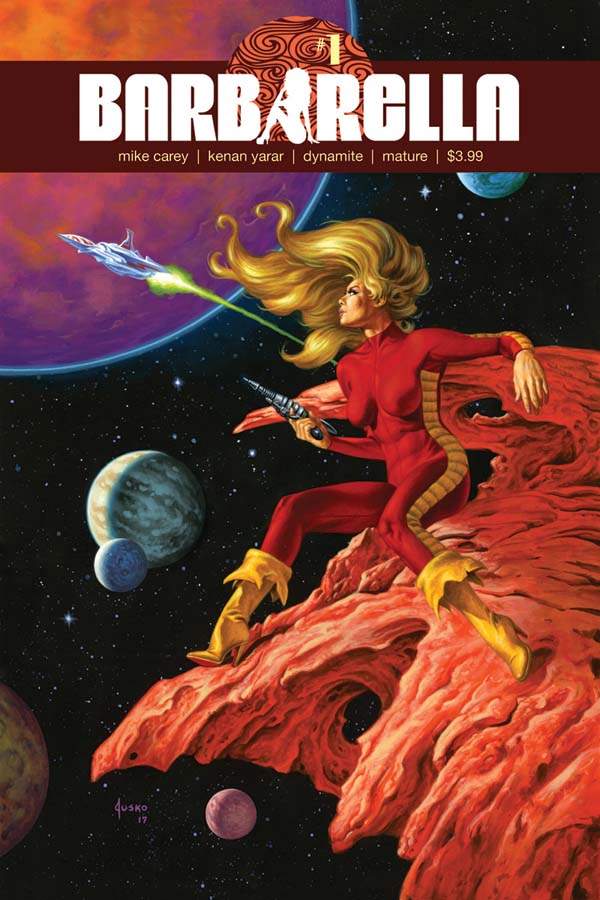 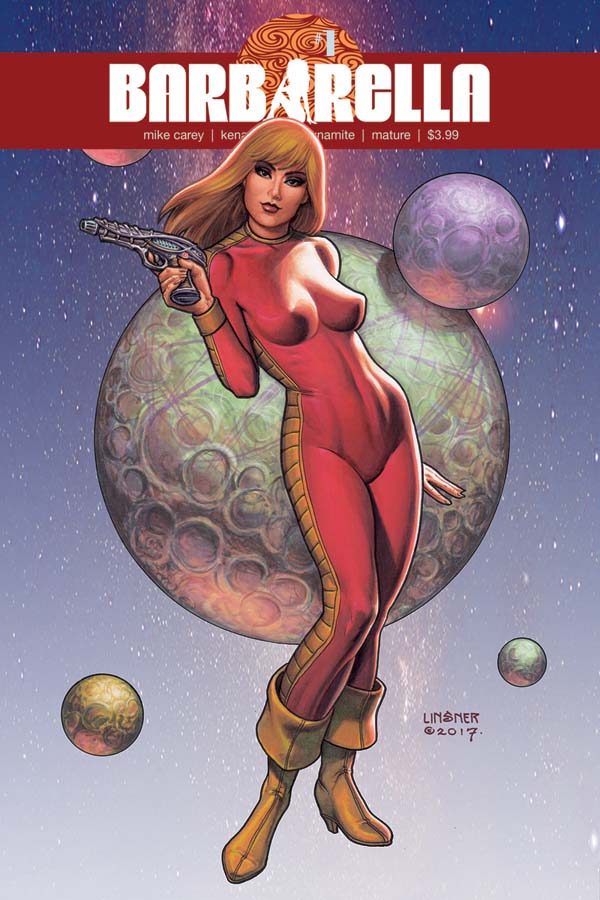 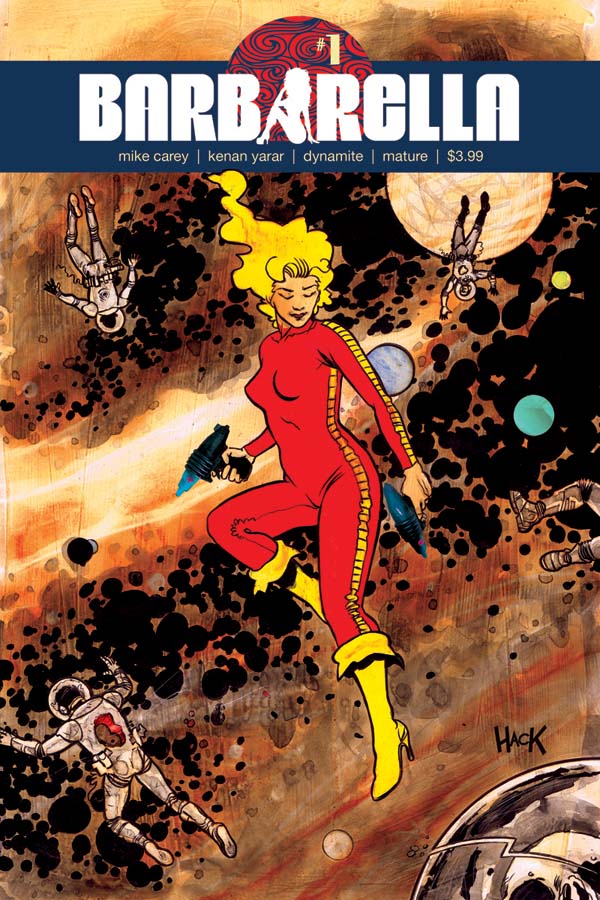 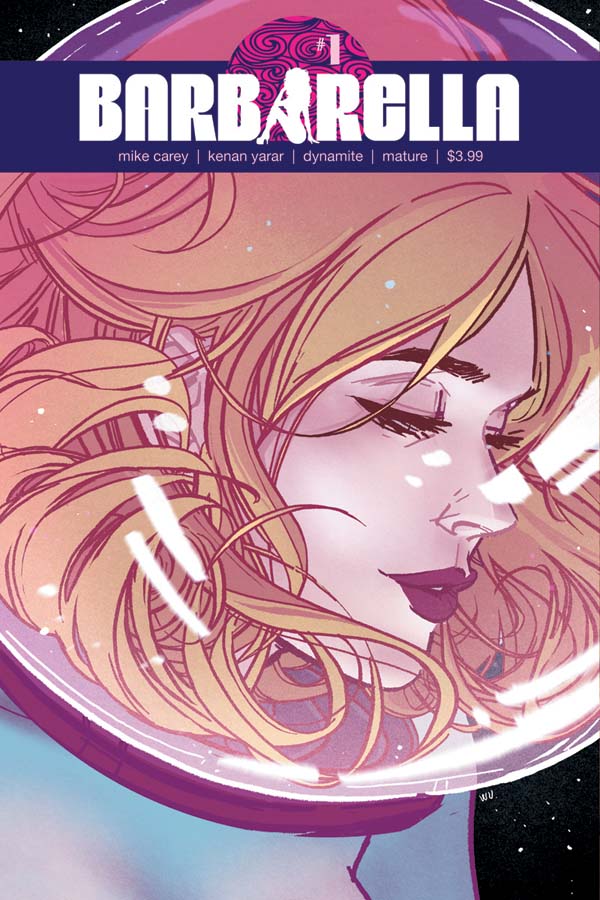 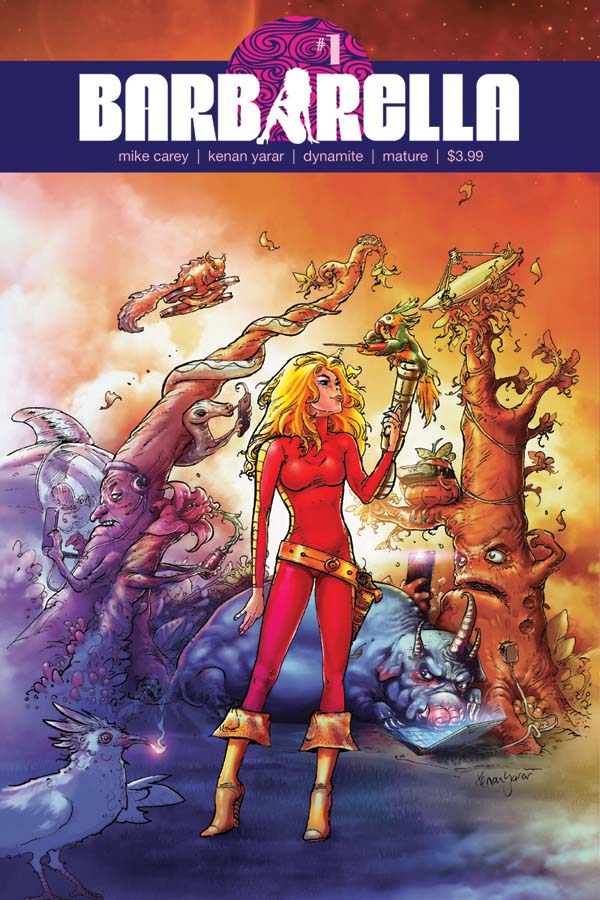 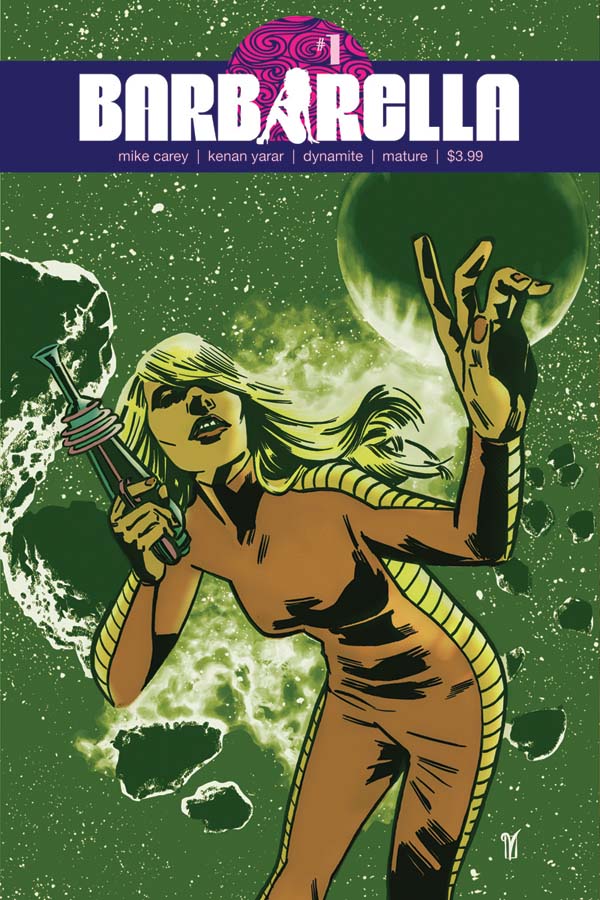 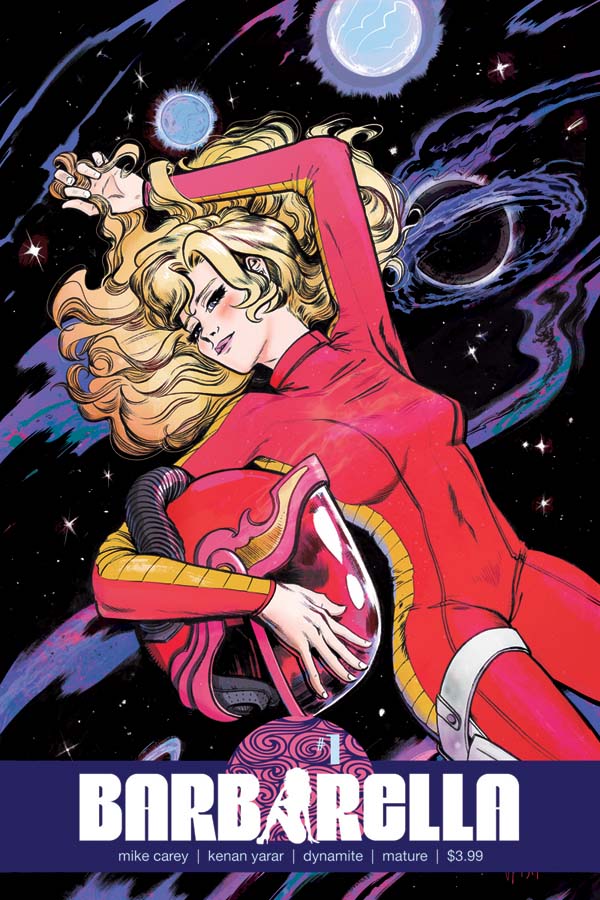