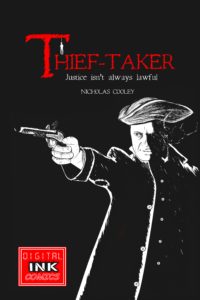 Based on a true story. England, 1724, a violent, corrupt and greedy society. George I is the king of Great Britain and Ireland and Robert Walpole the Prime Minister .The national economy is still suffering from the South Sea Bubble, a stock market crash which involved corrupt politicians. London is the largest and most populous city in Europe and is experiencing a major crime wave. The criminal underworld is being cleverly orchestrated by a man named Jonathan Wild who is operating on both sides of the law. Highwaymen are terrorising travelers across the country and face the possibility of the death penalty if caught. It is believed one in five women are working as prostitutes. The Gin Craze is in full swing adding to the vice & debauchery already plaguing the city. There is no professional police force, private individuals are hired to capture criminals, they are known as Thief-takers.
———-

In the 18th century, theft was everywhere. Normally upright citizens could, at any given time, put on a mask and indulge in the liberal application of force to gain possession of coveted items. The victims, understanding that the watchmen were ineffective or corrupt themselves, had limited options when it came to finding justice. Enter the Thief-takers, individuals who made it their business to retrieve stolen property and bring the thieves to heel. Differing from bounty hunters, thief-takers weren’t hired by authorities, but by the victims themselves. The irony was that, as often as not, thief-takers were no different from the thieves they hunted. Many started out their careers as thieves and highwaymen themselves, turning away from their “life of crime” only when caught.

Adam Thorne is looking to make his way in the world, hopefully on an upward trajectory, but is hampered by a lack of funds or much resembling true ambition. So it is that he falls into London’s seedy underbelly, finding the life of the highwayman appealing. A successful life of crime could serve him well in two ways: theft could improve his financial standing; and according to certain of his peers, chicks dig rogues. With these lofty goals in mind, Adam sets out to find a path into that world of skullduggery, despite the stumbling blocks in his way. Meanwhile, the ruthless and notorious highwayman known as Skin Face is wreaking havoc up and down the Great North Road.

As an independent comic title, Thief-Taker has set out on a different track. Staying away from the normal crowd of superheroes and vigilantes, creator and artist Nicholas Cooley has taken a historical approach. Tapping into the obscure profession of the thief-takers, offering their own brand of justice for hire, Cooley is offering a more unique story. Among indie comics, “unique” is almost as important as the actual content. If you don’t offer something different enough to entice a reader to give your book a try, the independent creator will have a tough time getting a title off of the starting block.

As a new hand at comic creation, Nicholas Cooley has gotten past the stage of concept and into, hopefully, the nightmare that is ongoing production. The story is occasionally choppy, with the story taking a few narrative jumps that left me wondering if I’d skipped a page or two, but the dialogue itself was actually pretty well written. As my tens of readers might know, dialogue is one of my benchmarks/pet peeves, and it’s one of the more difficult aspects of writing to get the hang of. While not perfect, Cooley’s grasp of scripted dialogue is nowhere near as bad as many examples I could name, some of them from far more experienced and commercially successful publishers.

Where Cooley shows some serious promise is in his illustration. Done in a simple black and white style, Thief-Taker is well-drawn, if not particularly action packed (not much leaping from rooftops in merry old England). The characters are all surprisingly distinct for the black and white format, and it was pretty obvious that Cooley paid close attention to facial expressions and features. What action there is might be laid out with more attention to detail, however that’s all something that will only be learned if a creator is given the chance to keep working.

Just for its unique angle of storytelling, Nicholas Cooley’s Thief-Taker should get some attention. Readers who aren’t looking for rote super-heroics, or who might be interested in the historical perspective of London, England in the 1720’s, should take a look. Picking up points for originality, it’d be great to see Cooley’s skillset develop along with his story. 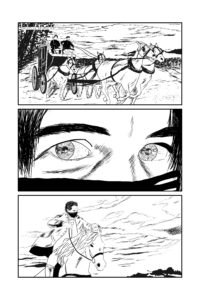 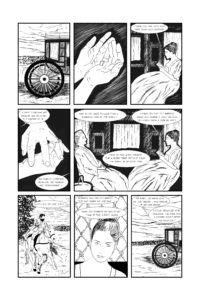 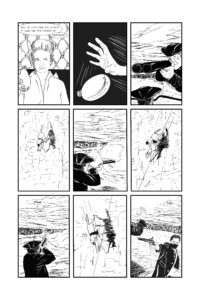