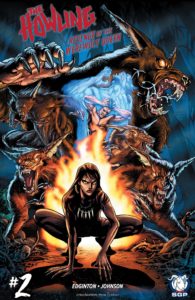 Three weeks have passed since Chris Halloran killed Karen White as she transformed into a werewolf on live TV. The public cried hoax and the government is moving to cover it up, but Chris is determined to reveal the truth. Meanwhile ruthless werewolf Marsha survived the carnage that ended the rest of the werewolf pack. With no colony to hold her back, Marsha is pursuing her own grisly agenda.
———-

In 1981, television news anchor Karen White (played by Dee Wallace in the film) helps bring down serial killer Eddie Quist (Star Trek Voyager alum Robert Picardo), but the trauma she suffered resulted in some severe psychological distress. Her therapist, Dr. George Waggner (British TV’s Avenger, Patrick Macnee) recommends she participate in a retreat he runs out in the woods. At first, things seem idyllic. The setting is quiet, and while the other patients may be… interesting… it all appears to be therapeutic and on the up and up.

That all comes to a screeching halt when it becomes clear that Dr. Waggner, his patients, and not-quite-dead Eddie Quist himself are werewolves using the retreat to recruit new members into their hidden society. The first to be drawn into a new life with the pack is Karen’s husband Bill (Christopher Stone), who falls victim to the sultry Marsha Quist (Eddie’s sister, played by Elisabeth Brooks). Unable to ignore the evidence in front of her, Karen chooses to make a stand against the bloodthirsty monsters. With the help of her friends, Chris Halloran (Dennis Dugan) and Terri Fisher (Belinda Balaski), Karen burns the retreat and all of the werewolves in it, to the ground. Before it’s all over with, Terri loses her life to Eddie Quist, and Karen is bitten. Making the decision not to accept her life as a werewolf, Karen chooses to out the shape shifters and their hidden society on live television. During the broadcast, Chris follows Karen’s last wish and shoots her with a silver bullet while she’s in mid-transformation. Thus ends the werewolf threat.

Space Goat Publishing, an independent publisher I’m only recently discovering, continues the story of The Howling in a new comic series. It seems that all of the werewolves weren’t killed in the fire, and now werewolf queen Marsha is on the trail of an ancient relic. If she can get her claws on the Hand of Akkara, she can restore what she feels is the natural order of things: When Shifters will once again rule the Earth!

I’m gonna come right out and admit that I really didn’t have high hopes for The Howling as a comic book. The movie was so long ago that I just wasn’t sure how a continuation would translate. I would like to proclaim, loud and proud, that I am very happy to have been wrong. The first two issues of the ongoing comic series are written by Micky Neilson, author of e-book novel Starcraft: Uprising, a World of Warcraft comic book mini-series, and a series of Overwatch comics that focused on the individual characters from the popular video game. Neilson has brought some solid writing to the story begun back in 1981, avoiding the obvious pitfalls of this kind of adaptation. Where characters could turn out to be easy caricatures, their dialogue full of melodramatic fluff, and the plot a thinly veiled excuse to cash in on a popular movie franchise, Neilson uses his characters sparingly and lets them build their own stories. Two issues in, and there has yet to be a dramatic meeting between the werewolf hunting Chris and the titular Queen of the Howlers Marsha. In fact, Chris is as yet unaware that Marsha is even out there, searching for the Hand of Akkara and killing pretty much anyone who gets in her way. All Chris really knows so far is that some of his co-workers, witnesses to Karen’s on-air transformation, have started to turn up dead. For that matter, Marsha has yet to really acknowledge Chris, the man who shot and killed her serial killer brother Eddie, in any way. The whole setup presents an interesting and layered plot: Is Marsha acting on her own in her search for the werewolf relic? If so, who’s responsible for the deaths surrounding Karen and Chris’s revelation? How deep does the shapeshifter society, hinted at in the original movie, go? The more subtle approach taken by Micky Neilson is one that has me looking forward to the ongoing story’s future revelations.

As no comic book can tell a story without solid artwork, it’s fortunate that Spacegoat Publishing has found a match in the team of Jason Johnson (illustration) and Milen Parvanov (colors). The style may not be particularly smooth, but it works very well here and reminds me quite a bit of the work done by Brian Hurtt in the Weird Western series The Sixth Gun. The characters are able to stand out in a crowd, and are recognizable as their movie counterparts. What’s more, Johnson has paid attention to the source material of the film, using its ground-breaking (for the time) special effects as the inspiration for his werewolves and their transformations.

As a publisher, Spacegoat is new to me, but with the myriad titles I’ve taken a look at so far (Evil Dead 2: Darkness Rising, Moonchasers, Heroines, Mage, Inc., and Eternal Descent) they’re producing some solid titles and apparently holding some high standards for all aspects of storytelling in the medium. Even in the titles I haven’t really cared for, it’s been more about my personal preferences than anything to do with the quality of the books. And hey, they make table top board games too!

The Howling: Revenge of the Werewolf Queen is off to a great start, building up on the mythology hinted at in the 1981 horror movie classic. It has quite a bit to live up to, as The Howling (film) is still acknowledged as one of the definitive examples in the werewolf movie genre, and is doing more than a fair job of representing so far.

Fans of the old school tooth and claw movies will want to take a look at this title while you still can… If Marsha has her way, we’ll all be herded like cattle for the slaughter before too long. 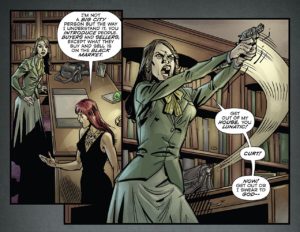 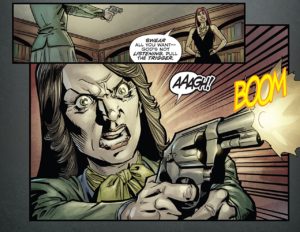 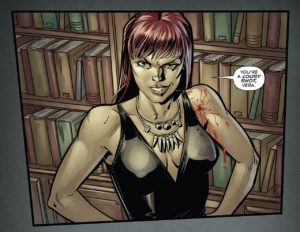