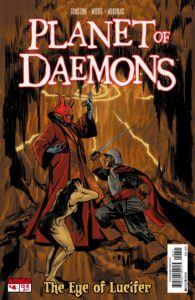 In the occult realm of the Qliphoth, the puritan magistrate Amos Deathridge serves as jailer of the daemons who cast a sinister influence over Earth. Amos meets the succubus called Heinous and together with the daemon Salis they go after the mighty lord Count Eligos.
———-

In the labyrinthine realm of Sathariel, the world of the Qliphoth where all secrets are concealed and truths are obscured (in the Hermetic Qabalah Sathariel translates to “Concealment of God”), Amos Deathridge is closing in on his final confrontation with the Daemon of War, Count Eligos. Along the way, he’s lost the human ally in his quest, but gained two others whose backgrounds hold secrets that will finally explain Amos’s presence in the mystic realm.

With a few clues, revealed to readers in flashbacks, series writer Kevin Gunstone has left a trail that’s wound its way through the four issue series, Planet of Daemons. At first, the answers seemed pretty obvious, but the farther along we go, the more obvious it becomes that the answers we thought we knew weren’t even the questions we really needed to ask. It’s been pretty obvious who the succubus Heinous was in life. Maybe a little less obvious but still not all that surprising has been the identity of the daemon Salis. If we’d been paying attention throughout the four issue series, those answers were pretty well laid out for us.

Now in issue four, the last in Gunstone’s story arc, we’re given the satisfaction of knowing that we’d been correct all along. Unfortunately, that wasn’t the story being told. After going back and rereading the series from the start, I realized that the real mystery here has been surrounding magistrate Amos Deathridge himself. From the first issue, I’d pretty much taken his presence in the Qliphoth for granted. He was there, fighting evil and taking names, and any daemons who crossed his path were gonna get it.

Sure, we got the tip-off that Amos was carrying a talisman that would open a doorway from the daemonic dimension to our world, and that he couldn’t go home without the open doorway allowing a flood of evil to cross over with him. But even that pretty important fact isn’t the real story behind “Jailer of Daemons’” presence. And that’s all I’m gonna say. Hopefully, just knowing that there’s an “AHA!” moment coming will be enough to prompt readers, both returning and new, to dive into Kevin Gunstone’s bizarre world.

Now, we’ve all seen demonic dimensions of evil, in comics, in movies, and on television. What made Planet of Daemons stand out was more than just the cool spelling of the word “daemons”. Gunstone avoided the more familiar realm of Christian based demonology, and dug into the lesser known mysticism of Hermetic Qabalah. That’s been one of the distinctions that, for me anyway, set this series apart from other comics based in the supernatural.

The other thing that’s caught my eye, and kept it, has been the classic looking work from the team of Paul Moore (art) and Stefan Mrkonjic (colors). From the beginning, Moore’s lines have reminded me of Hal Foster’s work on the Prince Valiant comic strip, dating all the way back to 1937. The style works very well in this setting, as Prince Valiant takes place in Arthurian (that’s “medieval” for the Philistines out there) times. Adding to Moore’s efforts, the colors from Mrkonjic have done a good job of establishing the settings. From the sickly yellow color palette of the Qliphoth, giving that realm a distinctly unhealthy look, to the normal tones of the mortal world shown in flashback scenes, it’s easy to flip to any page in an issue and pick up on where we are in the story.

Before you start thinking that a four issue run is all there’s going to be, Kevin Gunstone has assured readers that there’s more to come. Things aren’t all tied up nice and pretty for us at the end of this story arc, so it’s pretty much a guarantee that Magistrate Amos Deathridge hasn’t fought his last battle in the Qliphoth. Sathariel is only one world in the daemonic multi-verse, so there are still sights to be seen and evils to be fought. 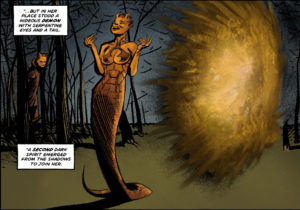 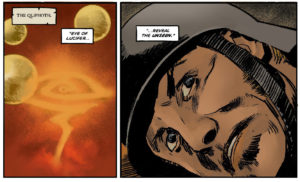 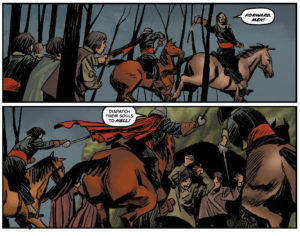