From New York Times best-selling writer Jeff Lemire (BLOODSHOT REBORN, Moon Knight) and extraordinary artists Lewis LaRosa (BLOODSHOT REBORN) & Mico Suayan (BLOODSHOT REBORN), a bloody and vengeful new era for Bloodshot begins this September as Ray Garrison escapes his violent past to build the one thing he never thought he’d earn: a family. But when a hateful secret from his true love’s past threatens their fragile peace, Bloodshot will be forced to run headlong into a barrage of blood, bullets, and broken bones for a revenge-fueled assault that will have crushing consequences for those he holds most dear…

His sacrifice will be her salvation.

Now: In the arms of his beloved girlfriend Magic, Bloodshot has finally found hope for the future…in the form of the couple’s unborn child. But when Magic’s estranged family – a cruel and sadistic clan of homegrown criminals – re-emerge to lay claim to their lost daughter, Bloodshot will be pushed back to the brink of madness, mayhem, and warfare…

Soon: Eight years from today, Bloodshot’s daughter has inherited her father’s incredible abilities. Hunted by a high-tech kill squad called Omen, Jessie must hone her powers…and learn how to survive before the world is swallowed whole by the darkness that now pervades America…

BLOODSHOT SALVATION #1-12 PRE-ORDER EDITION BUNDLE
Written by JEFF LEMIRE
Art by LEWIS LAROSA and MICO SUAYAN
Covers by RYAN BODENHEIMAvailable only as a pre-order set! The BLOODSHOT SALVATION #1-12 PRE-ORDER EDITION BUNDLE – twelve, 40-page massively expanded editions of the complete first year of Jeff Lemire’s staggering new series – can only be ordered as a set and must be ordered with your local comic shop by the initial order date of July 27th, 2017!

Released monthly, each PRE-ORDER EDITION comes packed with specially expanded bonus content and extra features including creator commentary, behind the scenes looks at the creation of the comics, process character designs and artwork, and more!

Plus: Fans that order this one-time bundle by July 27th, 2017 will also receive the BLOODSHOT SALVATION #1 RAMPAGE REDUX – a FREE, LIMITED EDITION, and FULL-LENGTH COMIC BOOK – polybagged alongside the series’ first pre-order edition! Featuring the raw black and white interior artwork of powerhouse artists Lewis LaRosa and Mico Suayan plus brand-new bonus features including “Top-Secret Mission Reports,” “The Biology of Bloodshot,” “Bloodshot’s Body Count,” and “The Complete History of Bloodshot”! This expanded encore presentation of BLOODSHOT SALVATION #1 is available as a pre-order bonus ONLY and will never be offered for individual sale!

The ultimate turning point! A war has been won, a victory has been decided…and, now, an entire alien world kneels before the throne of their new leader: the unstoppable X-O MANOWAR! He has traded his armor for a crown and a new age now begins…even as an extraterrestrial invader readies an interplanetary attack that could pull Aric of Dacia from the newfound safety of his imperial palace and back into the blood-sodden battlefields where his conquest began.

AN ALL-NEW JUMPING-ON POINT! AN EXPLOSIVE 40-PAGE MILESTONE! Ninjak’s past and future – in the crosshairs!

Behind the years of training… Underneath the high-tech gadgetry… MI-6’s most experienced operative is still flesh and blood. So just how is a mortal man like Colin King able to survive in a world filled with telekinetic psiots, eternal warriors, and sentient suits of alien armor? The key to Ninjak’s survival is buried deep in the past…and today, the world’s most dreaded super-spy prepares to reveal his most closely guarded secrets!

FIRST: Superstar writer Matt Kindt concludes his masterful, record- setting run alongside fan-favorite artist Francis Portela (FAITH) and an all-star cast of special guests with an essential and revelatory tale of Ninjak’s deadly beginnings! THEN: The gauntlet is passed to acclaimed writer Christos Gage (Netflix’s Daredevil) and blockbuster artist Tomas Giorello (X-O MANOWAR) as they prepare a startling introduction to Colin King’s next mission with a shocking prelude to NINJA-K #1, a riveting new ongoing series beginning in November!

With her homeland embroiled in a crisis of life and death, War Mother must venture beyond the walls of The Grove – the bioengineered utopia that birthed her – in search of a mysterious citadel that could save her people! But, to reach it, she must endure an onslaught of 41st century Earth’s most perverse monstrosities and fight for survival across the harsh landscape that has subsumed our once-fertile world… With only her sentient sniper rifle to aid her, can one lone soldier stand resolute against the shadows of the future’s darkest frontier?

“MASSACRE” has claimed a life from the Renegades’ own ranks… and their new mission starts now: to rally as many psiots to their cause as possible. Now, this damaged team of telekinetic teenagers are off the grid and on the move, traveling America to recruit soldiers for the inevitable war they all see coming. But they are being watched…

“MASSACRE” seeks its next victim as multiple Harvey Award-nominated writer Rafer Roberts (Plastic Farm) and superstar artist Darick Robertson (The Boys, Transmetropolitan) escalate THE ROAD TO HARBINGER WARS 2 to the point of no return…and lead the Renegades toward their most seismic confrontation yet! 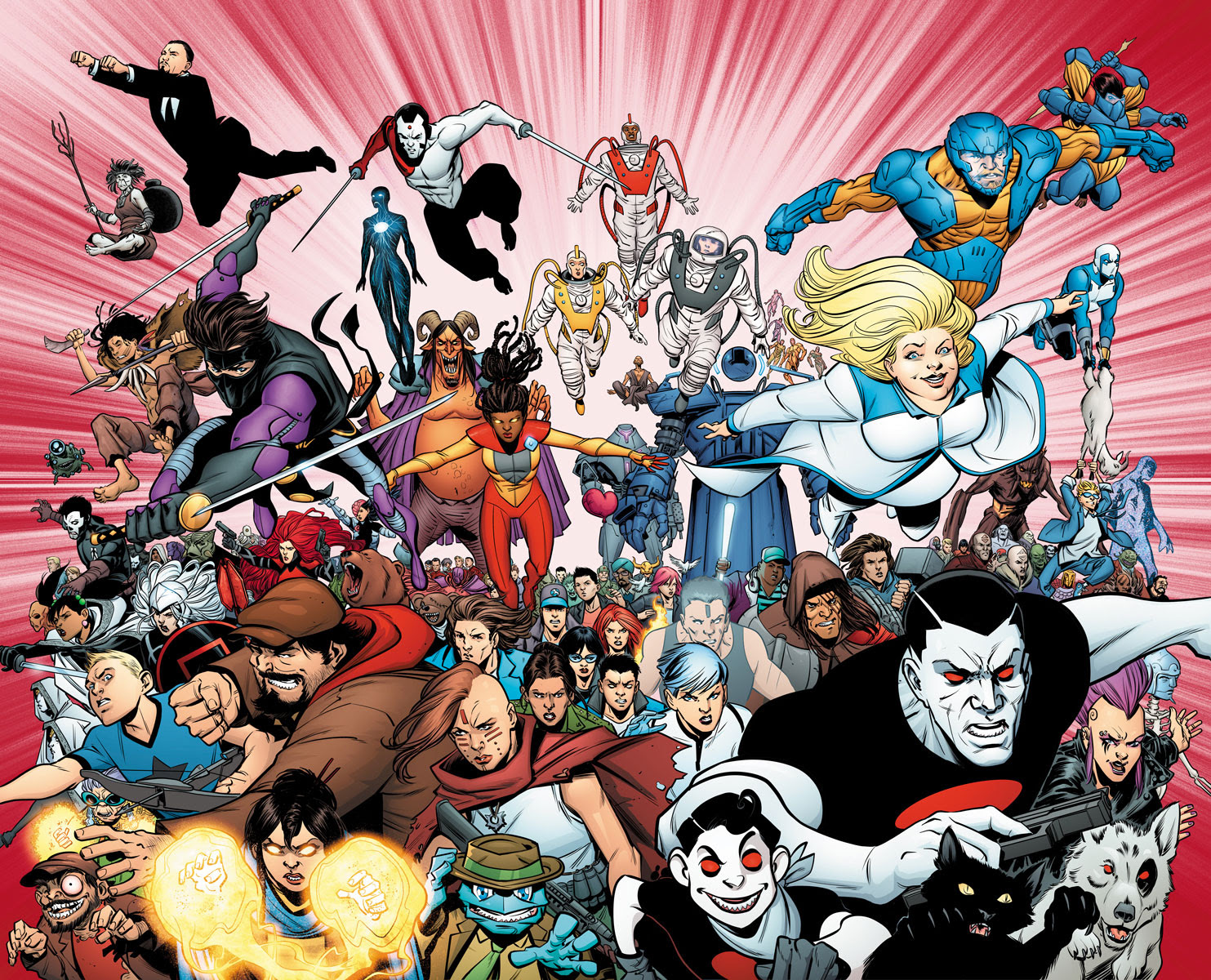 FAITH AND THE FUTURE FORCE #3 (of 4)
Written by JODY HOUSER
Art by DIEGO BERNARD
Cover A by AUDREY MOK
Cover B (Wraparound) by MIKE NORTON
Variant Cover by DOUG PASKIEWICZ
Variant Cover by AFUA RICHARDSONFuture meets past as the Valiant Universe comes full circle!

Faith Herbert and Neela Sethi, the newest Timewalker’s first attempt at saving time from being unwritten has failed…which means it’s time to rewind the clocks and star— Wait, didn’t this happen already? No matter which heroes she recruits, Faith’s attempts at saving the time stream keep ending in disaster, throwing her in an endless loop of doomed missions! To break the cycle, Faith and Timewalker will have to call upon their strangest recruit yet for a last ditch effort to save the universe!

Jump back to the future with Eisner Award nominee Jody Houser (FAITH, Mother Panic) and rising star Diego Bernard (X-O MANOWAR) as they bring the summer’s most epic event to its penultimate chapter…again?

After weeks of training and preparation, the time has come for Livewire and her specially gifted recruits to lure the robotic killer called Rex-O out of hiding! But will this extraordinary new team of heroes rise to the occasion and unlock the power they’ve always harbored inside…or will they find out that they deserved to be left behind? Their lives have led to this moment…and before the battle ends, Livewire and her team’s place in THE ROAD TO HARBINGER WARS 2 will be made clear!

In the fires of victory, a soldier becomes… a general. With the hostile Cadmium army crushed beneath his force’s boots, Aric of Dacia now commands an entire fleet into the final battle for the soul of an empire. But as a new dawn rises across this unrelenting alien world, what vicious new menace will come forth to greet it?

BRITANNIA VOL. 2: WE WHO ARE ABOUT TO DIE TPB
Written by PETER MILLIGAN
Art by JUAN JOSÉ RYP
Cover by CARY NORD

Fifty thousand Romans stand on their feet, watching from the rafters of the coliseum with captured breath as Achillia, a Gladiator unlike any that Rome has seen before, faces incredible odds – one lone warrior against five of Rome’s greatest. Such is the tradition, when a female gladiator enters the fray. When the carnage is complete, the coliseum roars its approval as Achillia stands victorious. Now only one match away from winning her freedom, she has begun to gain renown. The women of Rome, suppressed by their husbands and fathers, have noticed. The men of Rome, husbands and fathers to a growing horde of women entertaining ideas of independence, have noticed as well.

On the other side of Rome, a strange mystery swirls through the Palatine Hill. In the dead of night, down winding alleys, Rome’s elite swear that they see visions of a blood-soaked Apollo walking the city…visions that are driving them mad. Even more are becoming sick with weird fever god-dreams. Panic ensues in the city. The Chief Vestal, Rubria, is arrested by Emperor Nero and threatened with crucifixion unless the deadly curse that’s fallen on Rome is lifted. She asks Antonius Axia, hero of Britannia and Rome’s only detective, for help. She offers only one clue…the gladiator Achillia.

Collecting BRITANNIA: WE WHO ARE ABOUT TO DIE #1-4.