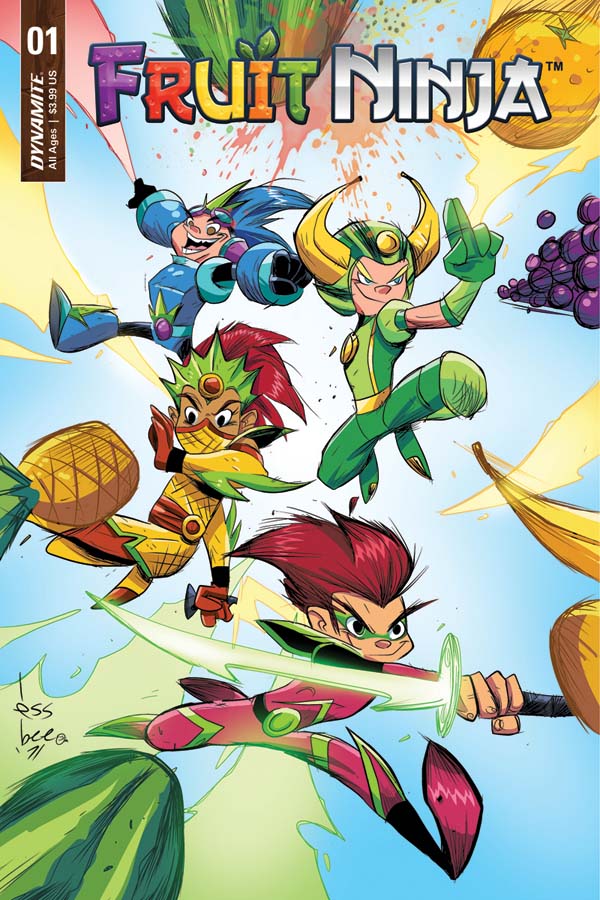 In this juicy new series, the Fruit Ninjas have mastered the art of Juice Jitsu (no, really) which unlocks hidden powers through the slicing of fruit (seriously), so they can protect their neighbors from time-traveling super-villains! Fruit Ninja #1 will also feature two-bonus stories including an ancient Fruit Ninjas tale from a thousand years ago, as well as a wild and high-flying Jetpack Joyride story!
Writer Nate Cosby said, “I don’t want to get everybody TOO excited, but Fruit Ninja may end up being the greatest comic series ever created. Because there’s fruit and there’s ninjas and there’s jetpacks made of cake and attack hippos wearing goggles that come out of tubes and an army of hyper-aggressive ants that know how to drive peaches. And…that’s…JUST…THE FIRST ISSUE (which reminds me, I really should figure out what’s going be in the second issue)!”
Nate Cosby is a multi-award nominated writer and editor who wrote the Eisner- and Harvey-Award nominated Cow Boy, as well as Buddy Cops, and Pigs. He has edited and packaged The Thrilling Adventure Hour, X-Men First Class, Turok: Dinosaur Hunter, Magnus: Robot Fighter, Doctor Spektor, and Kings Watch. He also oversees production of the popular Angry Birds comic series.
“After its wildly successive launch in late 2010, Fruit Ninja became a staple in the mobile gaming industry, as it was downloaded to more than one-third of all iPhones within 18-months of release,” said Nick Barrucci, Dynamite’s CEO and Publisher. “With Nate Cosby’s cutting sense of humor coming across on the page, fans of the game are going to enjoy sinking their teeth into these fun, new adventures!”  The debut issue of Fruit Ninja features cover art from interior artist, Scott Brown, as well as a game play option! Limited variant editions in “Black & White” and “Virgin” formats are also available as retailer incentives for comic shops that support the launch issue by achieving stocking thresholds. Fruit Ninja #1 will be solicited in Diamond Comic Distributors’ July 2017 Previews catalog, the premier source of merchandise for the comic book specialty market, and slated for release in September. Comic book fans are encouraged to reserve copies of Fruit Ninja #1 with their local comic book retailers. Fruit Ninja #1 will also be available for individual customer purchase through digital platforms courtesy of Comixology, Kindle, iBooks, Google Play, Dynamite Digital, iVerse, Madefire, and Dark Horse Digital.
Please follow and like us: