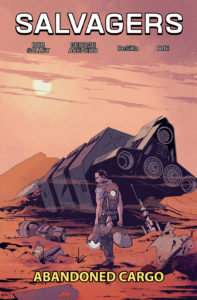 In the distant future, the habitable planets are connected through the trade of natural and artificial resources. The import and export business is flourishing for some systems, while leaving others at the mercy of major trade corporations.

After the end of the Galactic War, peace blanketed the galaxy; however, planets with little shipping resources turned to piracy or developed small guerilla military units geared to pillage trade ships. This spawned the necessity for trade companies to hire private security contractors for protection.
Even under the security of peacetime, there is no shortage of violence in outer space; from looting raiders, Navy destroyers neutralizing a rebel movement to the simplest space station falling victim to a rogue asteroid.
These destroyed or abandoned ships and stations are classified as “WRECKS.”
Licensed crews are commissioned by governments, empires and corporations to remove these lifeless hulks.
In a hostile galaxy, the risk and reward is high for these crews.

This title’s been out for a bit, but after having met writer Bob Salley at C2E2 (picked up a copy from the man himself) and then after winning a copy in a random drawing on Twitter (kind of a big deal for me… I don’t win stuff), I thought it was fate. This was the article I had to write. It’s a moral imperative… So without any ado, read on!

Meet the crew of the Harrier IV; Captain Bill Roenik, pilot and Operations Officer Teagan, troublemaking tech specialist Brigby, and requisite large gruff angry guy Ty’r. They’ve been hired to investigate the wreck of a Darzinean Warspray and retrieve any salvageable materials and/or ordinance. The job will take them deep into the Outer Rim where pirates abound and salvage crews have been known to disappear. In this case the risk is mitigated by the potential payday, so the Harrier and her crew are on the job. The story gets moving quickly when, after boarding the Warspray, Captain Roenik and company discover a force of still active Blackbane private security robots. The bots are still following their programmed directive to defend the derelict ship, and that means that the Harrier crew is in for a fight. If they survive to collect their salvage pay, they’ll be left with unanswered questions: what was a Darzinean battleship doing with a contingent of privately contracted security bots; why does the ship look like it was attacked from within; and what happened to the crew, now missing without a trace?

Writer Bob Salley has put together a gritty post-war universe in which a continued existence is neither easy nor guaranteed. He’s peopled this universe with a variety of alien races, multiple factions of power players, and the opportunistic criminal element guaranteed to be looking for any profit they can take by guile or force. Zooming in on his crew of Salvagers aboard the Harrier IV, Salley has given us a cast of easily identified archetypes. Led by former military turned privateer Captain Bill Roenik, the cast has its brooding but always stalwart center. He’s competent and cool-headed in a pinch, and is always thinking of the safety of his crew, both on and off the job. At the Harrier’s helm is Teagan, interfacing with the ship’s AI to keep tabs of her crew from the confines of her pilot’s seat, conducting system checks and sending out overrides to look after and assist her people from a distance. The cigar smoking trouble magnet that is Brigby fills the role of the technical genius who’s as handy with a wisecrack as he is with an alien computer system. Finally, Ty’r is on hand to… well, Ty’r pretty much breaks stuff, using the most violent means at hand. Also, he occasionally fills in as the Harrier’s backup mechanic.

Lest I give the impression that Salvagers is nothing but bone crunching action and stereotypes, let me add to those fine and beloved traits the assurance that Salley has also imbued his universe with some mystery. Not just a matter of an abandoned derelict ship, the titular Salvagers have stumbled into a much more complex situation than they’d anticipated, that will lead them into a larger world of conspiracies and in all likelihood very little pay. There are enough little hints and nudges dropped throughout this trade paperback, containing the original four issues of the initial mini-series, to urge a reader to keep going, to peel back the layers a little bit and try to get a look at what’s going on under the surface.

And as far as surfaces go, artist George Acevedo and colorist DeSiKa have rendered an environment perfect for shadowy under the table deals and fast paced action. As the crew explored the abandoned ship, there was a great sense of cramped quarters holding potential danger just around every corner, a little bit reminiscent of tension-filled movies like Alien. Those cramped spaces could also quickly open up into larger, more sprawling panels, giving readers a sudden look at just how out-gunned the Harrier crew is.

I’m not going to say that this whole package comes together without a hitch, though. Some of the action was a little unclear, with information seeming to get lost from one panel to the next. In one example, a menacing security bot is about to rain down some mayhem on a prone Ty’r. The next panel shows the bot hit by what looked like flung nuts and bolts, with the sound effects of “Smaaash”, “Dink”, and “Dink”. Finally, a third panel reveals Brigby holding a fairly large smoking gun, a look of satisfaction on his face as he’s apparently saved his friend. After a double take, I realized what was going on, but given the relatively understated action of the second panel in relation to the reveal of the third, it was a little tougher to catch on to the scope of the action. These minor breakdowns in the action did give me a couple speed bumps in the flow of the narrative, taking me out of the fast-paced story as I had to stop to interpret what was going on, but for all this was a very entertaining book. My hope is that it was a case of miscommunication between the writer and artist, one not being sure where the other was heading and doing the best they could to fill in the gaps, and that as the series moves forward the hiccups will get ironed out… For that matter, I’m more than happy to consider that it could’ve just been me.

Overall, this was a very cool read. The story moved along quickly, the four issues spanning a relatively short amount of time. “Relatively”, because the second issue was devoted to a bit of a flashback that gave a lead in to the events of the first issue… a ploy that I actually liked because it gave me as a reader the chance to get right into the action, to start to get a handle on a cast of interesting characters, and to start forming my own sense of the Salvagers universe. If things did seem a little familiar at times, I’d like to point out that “archetypes” have been around long enough to become archetypes for a very solid reason. They give readers a built-in foundation from which to build their own experience while reading a story or watching a movie/TV show. Let’s face it, the reason we keep seeing the cigar smoking wise cracking trouble magnet is because we as readers and viewers just plain like that type of character.

People who like their science fiction stories to zip along at break neck speeds should be pretty happy right about now. Salvagers is written to satisfy fans of shows like Firefly, Killjoys, and The Expanse, where folk are just trying to make a living “out in the Black” and not always able to pick and choose how said living gets made as the universe keeps on spinning around them. If the overriding goal is to keep flying, I’m hoping that Salvagers, both the fictional crew and the comic they live in, have enough steam built up to make a go of it. 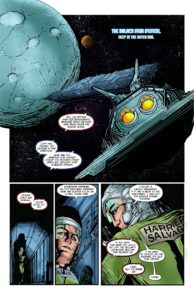 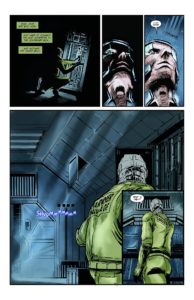 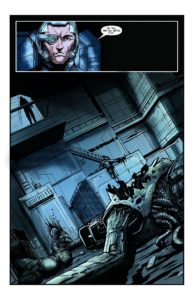