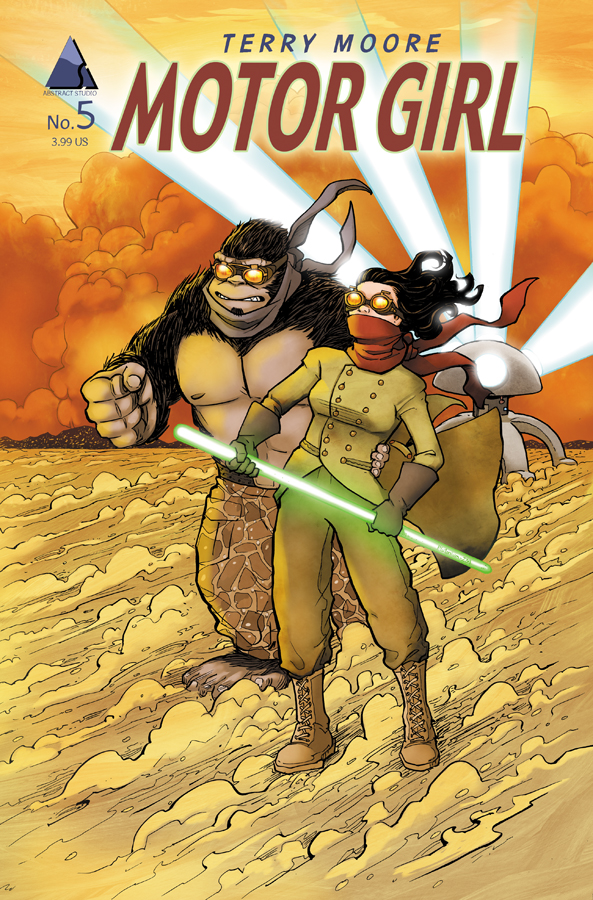 Boy.  “Strangers in Paradise”, while I can admire the scope and accomplishment, and I’m all in on theme/moral, never really grabbed me.  I tried “Echo” but it fell kind of cliché to me. I tried “Rachel Rising” ‘cuz it seemed like a genre more up my alley, but ultimately, and I don’t remember what but the storyline lost me.

I have always wanted to like something Terry Moore @TerryMooreArt because he is clearly a master or savant, and I can’t believe he’s only got one Eisner.

Moore is another in a line of self taught, independent minded creators that I’ve been gravitating toward lately.  From Mike Mignola, to Eric Powell to Dave Sim’s Cerebus to Matt Wagner’s Grendel, when I reassess my top ten list it seems populated with folks not only with unique visions, but the guts got go out there and do it their way.  Terry Moore clearly falls into this category.

Which brings me to his latest venture “Motor Girl” which is a resound hell yes, but before the hell yes, I had a hell of a time obtaining copies.  Either my local shop was allocated or they held on to them and sold them well above retail when demand for the early issues went through the roof.  Thank god for Ebay.

Pick up and Read Motor Girl!  There’s really no other way to say it.  They are on issue 5, 1 & 2 are harder to find, but worth it. Maybe pick up the trade paperback of the first 5 issues that came out in April!  No.  No maybe, just go get it.

The main character spunky and cute, is not going to need a man to save her anytime soon, with a sarcastic gorilla friend, aliens and a fire cracker of an old lady. Terry Moore’s nascent ability to shift effortlessly between pathos and comedy is extraordinary.  Occasionally, some of his art gets a little sloppy, but if he is trying to stay on a self imposed deadline, I get it.  His ability to convey emotion through his characters facial expressions is second to none, and this is not hyperbole, might be the best ever.  Terry Moore is not a pin up kind of artist, but he does draw women well, but naturalistically, very charismatic, but not necessarily sexualized.  Which in the comic medium, is a huge accomplishment by itself.

His stories flow effortlessly along, occasionally meandering, but he takes you such nice places you don’t really care, and his timing is impeccable.  There is not a character I don’t care about, including the bad guys. This one actually feels a little bit like a Shakespearean comedy, where there really are no bad guys, just characters to like, from the smallest up to the biggest, from the leads to the bit parts.

There is nothing special or overly dramatic about the tale he is spinning.  There are no fancy story gimmicks, it’s just a well told tale where I care about all the characters, because…I don’t even necessarily know why it works so well sometimes. This is just instinctual talent at work.  You know what it might be? Terry Moore trusts me as a reader to draw my own conclusions from the clues he’s given me.  He’s not telling or explaining, or even filling in the some of the blanks, he’s giving me just enough and allowing me to bridge the gaps.  It’s genius.

The man is professional, he clearly gives a sh*t about the medium and his product, this is the kind of book that makes comics special and vibrant, an absolute tropical paradise amidst the coagulation of floating garbage on the comic book sea.