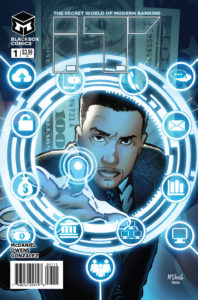 In the internally corrupt world of modern banking, the information technology (I.T.) expert is both the most powerful asset and the most hunted liability.

Evan Adonis has an amazing job. It’s both the best and worst thing he’s ever done. On the positive side, he saves the People’s Trust Bank of NY from threats to their server every day. His work is challenging, he has some good friends, and everyone depends on him to keep things going. He’s truly the man who keeps everything together. The downside? Well, his boss takes credit for everything he does, throws him under the bus when anything goes wrong, and now he’s noticed some people and numbers that make him feel uneasy.  Is the trouble with organized crime, is it coming from within the organization, or is it something else entirely?  Only time will tell.

How interesting can a comic about the I.T. guys at a bank be? Turns out it can be more interesting than you think. Yes, there are a lot of scenes with people working on computers, but the average I.T. person is expected to fix a LOT of situations in a day. Plus, it turns out that banking isn’t the world of pristine electronic transactions that you thought it was. Much like the people who run it, banking can have a lot of grey areas. Born of a concept by Dimitrios Zaharakis, this definitely has the feel of financial office I.T., but much higher octane than your average business.

The story flows very nicely – the time jump of “…several hours later” in the first issue just reminded me how much time the I.T department puts in on a daily basis, although the guy who sits in on the morning meeting is generally NOT the same guy who stays late to install new hardware. Adonis seems to do the work of about three dudes while eating a lot of crow. McDaniel throws in some great office interaction, from the guy who is just on this side of harassment to the sassy office mom who keeps the wolves away from her lambs.  I recognized a lot of the characters from my own office experiences, and found them well-fleshed-out and relatable.

There is more action than you would think in this book , but even the pages of stillness have movement to them. Nothing is completely static – the potential of motion is always there in McDaniel’s pencils, highlighted by Owen’s inks and Gonzalez’s colors. I like that it’s slightly warmer than the average cold establishment, indicating that this box is just going to get hotter.  I had a chance to talk to both Scott McDaniel and Dimitrios Zaharakis at C2E2, and not only do they want to put out a great story, they’re succeeding. 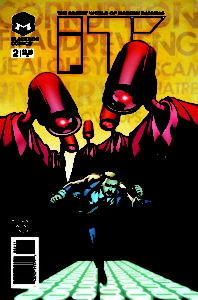