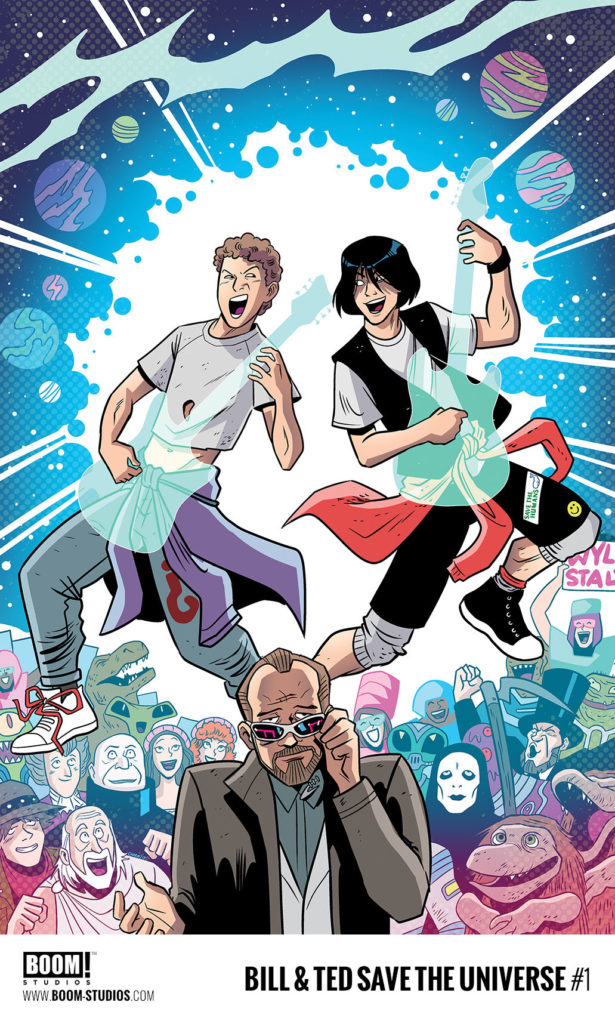 BOOM! Studios is most excited to announce that everyone’s favorite time-traveling duo from San Dimas are back in BILL & TED SAVE THE UNIVERSE, a new, far-out series launching in June. The excellent team behind Bill & Ted Go To Hell is back, too, and this time it’s intergalactic!

Writer Brian Joines (Imagine Agents, Secret Identities) and artist Bachan (Mighty Morphin Power Rangers, JLA Showcase 80-Page Giant) are reunited to continue Bill & Ted’s adventure. Derek Charm (Jughead) will provide covers. Strange things are afoot in the cosmos, and the Wyld Stallyns are pulled into an intergalactic conflict between a group of fans looking to spread the word of their music and a rigid alien law-enforcement officer who thinks their music does more harm than good.

“In ‘Bill & Ted’s Excellent Adventure,’ the duo was tasked with creating a song to save the universe. While they never got around to that, fast forward a couple centuries, and their music is now something galaxies fight over. In Bill & Ted Save the Universe, Bill & Ted’s music is supposed to bring peace to the cosmos, but peace doesn’t just happen overnight—there’s always resistance to anything that rattles the status quo,” says Joines, who helped guide Bill & Ted through the underworld in 2016’s Bill & Ted Go to Hell. “It’s such a broad, fun, goofy tale that as long as you maintain those levels, there’s really nothing that’s off the table in terms of where you take the story and the characters. They’ve already time-traveled and visited the afterlife—why NOT send them on some big intergalactic adventure next?”

Bill & Ted aren’t the only ones who will be continuing an excellent journey together with this new story. This will be Joines and Bachan’s fourth project together at BOOM! Studios. The pair first worked together on BOOM!’s Imagine Agents back in 2013, which has subsequently been optioned as a feature film by 20th Century Fox with Michael Keaton attached to star and produce the film. Joines and Bachan have previously adventured through the Bill & Ted universe with a short in Bill & Ted’s Most Triumphant Return and on the Bill & Ted Go to Hell series, which was one of Barnes & Noble’s top graphic novel picks of March 2017.

“I’m excited to be paired with [Bachan] again and to see what he does! He did such a great job with the characters for Bill & Ted Go to Hell and now he gets to combine that with the same ‘freak-flag’ design style he used for Imagine Agents, only now with alien races,” says Joines.

“Bill & Ted is one of the most fun, inventive, and lovable franchises out there,” says Alex Galer, Associate Editor. “Having Brian Joines and Bachan reunite on another Bill & Ted adventure is most triumphant! Bill & Ted Go to Hell was an absolute blast, and we have some incredible surprises in store for fans as we take them on a journey to save the universe.”

Bill & Ted Save the Universe is the latest release from BOOM! Studios’ eponymous imprint, home to a world-class group of licensed comic book series, including Mighty Morphin Power Rangers, WWE, Sons of Anarchy, Kong of Skull Island, Big Trouble in Little China, Escape from New York, and Planet of the Apes.

For more on Bill & Ted Save the Universe and more from BOOM! Studios, please visit www.boom-studios.com and follow @boomstudios on Twitter.