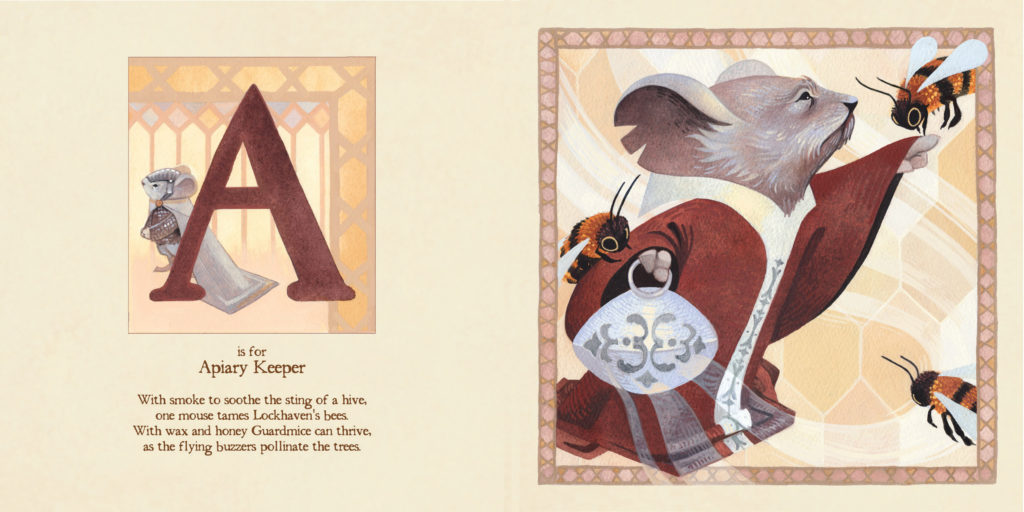 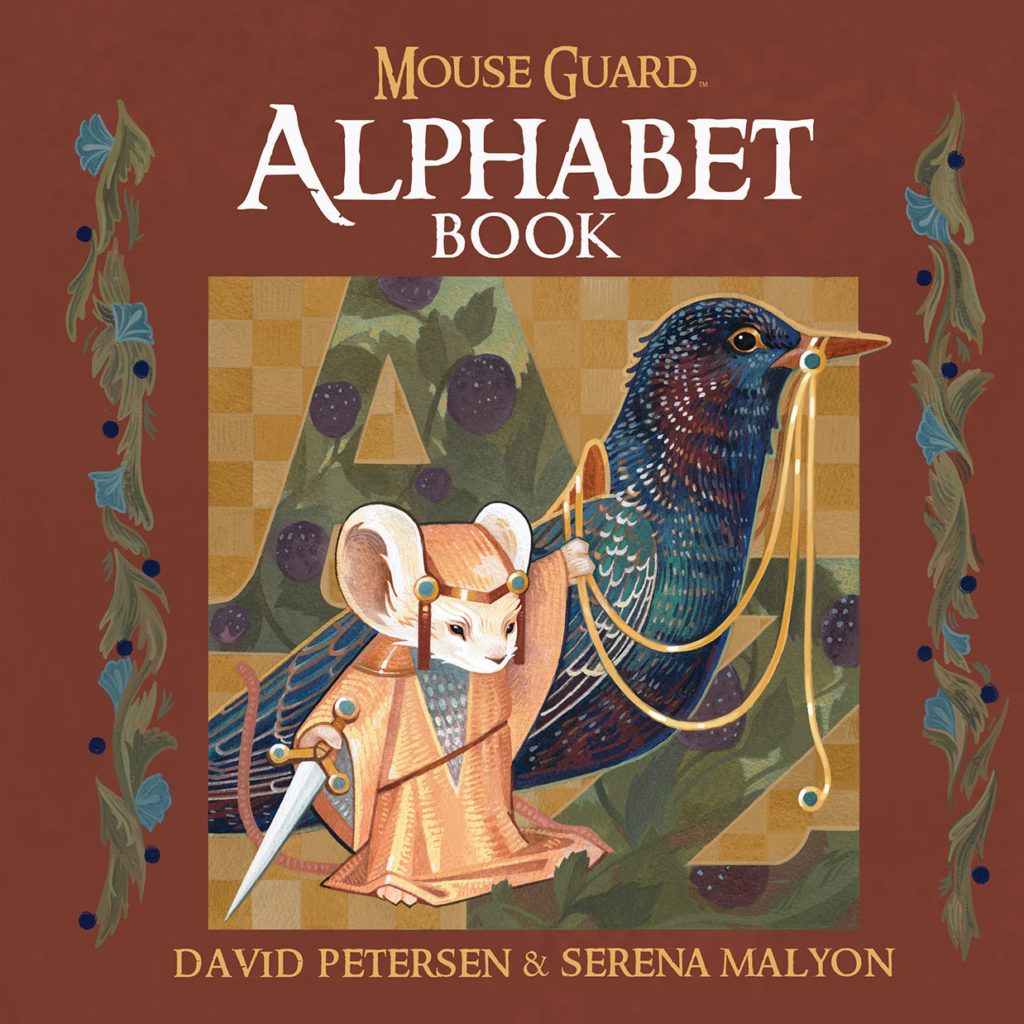 Learn the ABCs in the world of David Petersen’s Mouse Guard where brave mice protect one another from predators large and small, explore the expansive nature around them, and thrive in harsh conditions. Hand-painted by Malyon (Magic in the City, Button Hill), this is a look into a beautiful world with rich culture and stalwart friendships, worth exploring one letter at a time.

“The idea for the alphabet book came from my wife, Julia,” Petersen explains. “There were a few Mouse Guard projects she’d been suggesting for years that I brushed off in favor of more Legends of the Guard. One was last year’s coloring book, and once that was rolling I gave an alphabet book more consideration. After all, Mouse Guard has been around long enough that early fans are now having children. But we’d come to the realization that, artistically and production-wise, we couldn’t entertain the idea if I had to illustrate all of it.

“I like having the different art styles in Legends of the Guard with my work as a visual anchor, but for an alphabet book, it made much more sense for one strong artistic voice. Serena is certainly that voice.”

“Working on this book was a dream come true,” enthuses Malyon. “Mouse Guard was the first graphic novel I ever picked up. I was enchanted by the way it was drawn, I was captivated by the subject matter, and it had a world that I wanted to explore. It’s a comic I’ve been inspired by for years, and I couldn’t believe it when David and BOOM! Studios got in touch with me. Getting to work with David directly on a Mouse Guard book was an incredible experience. He gave me a lot of freedom with what I painted and how I depicted the world, so I’m really excited to share my vision of Mouse Guard.”

Mouse Guard Alphabet Book is the latest release from BOOM! Studios’ Archaia imprint, home to an acclaimed line of ambitious and award-winning graphic novels, including Rust by Royden Lepp; Jim Henson’s Tale of Sand by Jim Henson, Jerry Juhl, and Ramón K. Pérez; The Realist by Asaf Hanuka; and Hacktivist by Alyssa Milano, Jackson Lanzing, Collin Kelly, and Marcus To.

For news on the Mouse Guard Alphabet Book and more from BOOM! Studios, stay tuned to www.boom-studios.com and follow @boomstudios on Twitter.

About BOOM! Studios:
BOOM! Studios was founded by Ross Richie in 2005 with the singular focus of creating world-class comic book and graphic novel storytelling for all audiences. Through the development of four distinct imprints—BOOM! Studios, BOOM! Box, KaBOOM!, and Archaia—BOOM! has produced award-winning original work, including Lumberjanes, The Woods, Giant Days, Klaus, and Mouse Guard, while also breaking new ground with established licenses such as WWE, Mighty Morphin Power Rangers, Adventure Time and Jim Henson Company properties. BOOM! will also bring their original series to life through unique first-look relationships with 20th Century Fox in film and with Fox Television. Please visit www.boom-studios.com for more information.