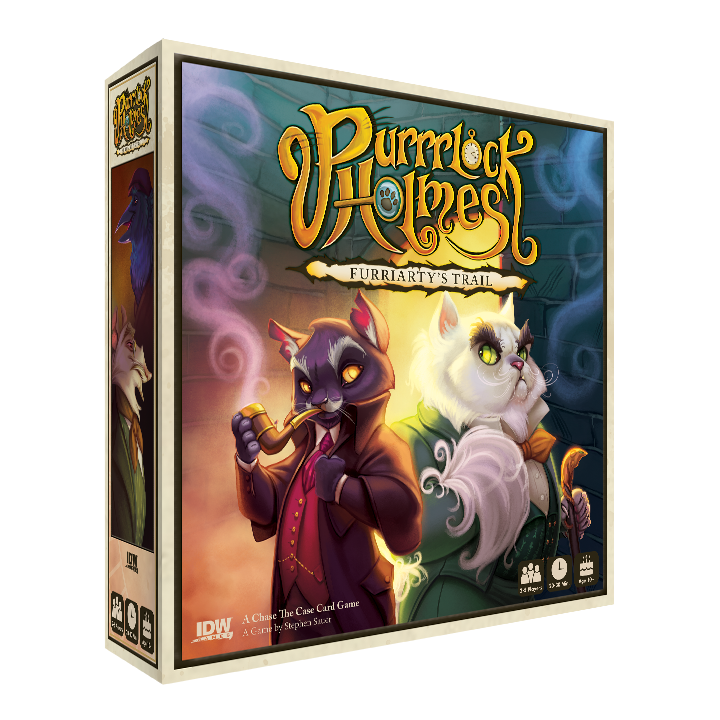 You’ve “cat” to be serious when it comes to cracking the case. And there is no detective more serious than Purrrlock Holmes. That’s what this game is about: deduction, and ridiculously over-dressed cats.

Furriarty is “litter-ally” terrorizing London and it’s up to Purrrlock Holmes to stop him before he escapes. Baker Street is awash with suspects, ranging from a gloomy Toad to a sorrowful Goose. It’s up to you, the Inspector on the case, to decide whether they are actual suspects or pawns in Furriarty’s masterplan. That Furriarty sure is a “paw” excuse for a well-to-do cat. The gameplay is simple and appeals to a wide audience: each player draws a Hidden Suspect card. Players take turns making guesses using an interesting clock mechanic about their unknown suspect’s identity. The other players (who can see every suspect but their own) will tell you if you’ve got a lead on your suspect. If not, it’s a dead-end. Figure out enough leads, deduce the suspect’s identity, and you get to snag a clue that leads to Furriarty.Each clue is labeled with a variable number of victory points. Every round, Furriarty pads his way closer to escape, putting tension on the players to guess, and guess fast, to solve the case. If you can deduce enough suspects, collect enough Paw Print tokens, you may be able to overtake Furriarty before he scrams.

Rub Furriarty the wrong way, and it’s the litter box for you!

The interesting part of the game is that when you successfully guess your suspect, and go to collect a Paw Print token, other players will not know how many points are listed on that clue token. Cat-hairs raise on your neck when you look across the table, unable to ascertain just how many points each player has collected, further heightening the tension. Catch up with Furriarty, and you score a major point advantage. At the end of the game, if Furriarty is caught, the player with the most victory points listed on their Paw Print tokens wins.

“Deduction is elementary, my dear Whiskers.”