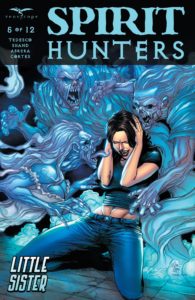 Ghosts and spirits have been with us since man first started walking the earth. What are they and what do they want? Why do some mean us harm? One team of paranormal investigators sets out to answer those questions, hunting the vengeful spirits that cross over into our world and facing the most terrifying hauntings man has ever known.

In this all-new horrifying tale of a mysterious haunting, the Spirit Hunters investigate an apartment building where local women are disappearing. However, as they get closer to finding out the disturbing truth, one of their own vanishes… Don’t miss this thrilling installment of Zenescope’s monthly dose of paranormal investigation!
———-

Dr. Michael Chase has assembled a team of specialists to investigate the things that most people write off as silly superstition. At the forefront of most of their cases is Ellen, sensitive and more “in tune” with the spirits of the dead than the rest of her team… or pretty much anyone for that matter. On their last case, Ellen ventured too deeply into that other place, and the experience left her scarred both physically and emotionally. To give her a chance to recuperate, Dr. Chase has taken her off of active duty.

The rest of the team, Vera, Curtis, and Chase’s skeptical nephew Ferguson, will have to dive into their next case alone as they head off to Missoula, Montana. Occupants of an apartment complex have reported sightings of a ghostly apparition, and in one case a teenage girl claims to have been physically thrown into a wall. The three will have to make do without Ellen’s ability to make direct contact with spirits as they root out the cause behind this apparent and increasingly violent haunting.

Anyone who’s followed Zenescope’s brand, but find themselves as yet unfamiliar with Spirit Hunters, may be shocked to find that there are no scantily clad followers of the Buffy Summers School of Paranormal Investigations. There are no fairy tales reimagined in the modern world or hooded arcane archers meting out justice in New York City to be seen in this title. What readers will find is a corner of the Zenescope world less influenced by myth, and more resembling shows like Ghost Hunters and Supernatural.

Storytellers Tedesco and Shand have crafted a series featuring a “case of the month” formula, with each issue devoted to a single investigation in the Spirit Hunter’s crusade. Sure, there is a building mythology as the ghostly side of Zenescope’s supernatural world is explored, but the format allows easier access to new readers. What’s more, Shand and Tedesco have done a pretty decent job of creating some twists and turns to go along with their things that go bump. In all honesty, this title has turned out some of Zenescope’s better stories, more thought out and less reliant on shock value. The writing is solid, giving some good dialogue between the characters as they discuss the realities of living out their lives alongside the ever-present sprits of the dead.

None of this is to say that Spirit Hunters is hard on the eyes. Julius Abrera’s artwork fleshes out the aforementioned spooks and shades, giving weight to a more understated world. Since there really isn’t a lot of “action” to be found in these pages, it’s up to Abrera to build on the foundation of the writing, and keep it interesting for fans of the visual medium of comic books. Colors are kept muted but not dingy, thanks to the efforts of Jorge Cortes & Slamet Mujiono, and the characters are given a pretty solid sense of themselves through their individual looks and styles. In a genre that puts heavy emphasis on “deeds, not words” I think it’s impressive that an artist can produce an eye-catching visual style without the benefit of laser eye-beams and cars being thrown about.

If you’re a reader of Zenescope’s other titles, this one might be interesting just for its departure from the normal formula. If you’re not already a fan, maybe because that very “formula”, don’t be too quick to write Spirit Hunters off. It’s not what some might have come to expect from a publisher that seems determined to break out of its own niche. 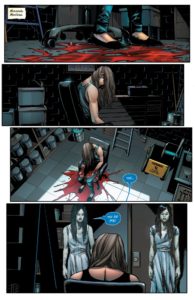 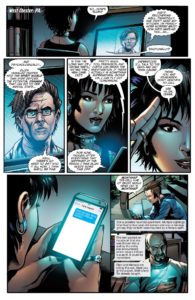 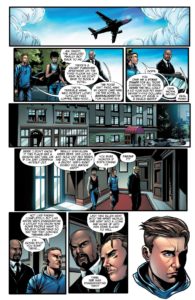