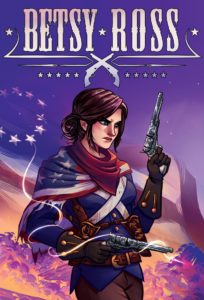 In this inaugural issue of Betsy Ross, the King tries to squash the rebellion before it starts by sending three soldiers on a sabotage mission. Betsy reconnects with some old, but not forgotten, friends from a life she had hoped was behind her forever.
————

In a dark back room, whispers by candlelight speak of revolution. Secret dispatches are passed from hand to hand as messengers spread the word- there’s an uprising on the horizon. Among the impassioned citizens of the New World, a young seamstress raises her fist in the air and calls for freedom. She’s been given a task, one that she’s accepted whole-heartedly because for cries and beliefs to be turned to action, the people need a symbol to fan the flames and rally beneath.

On her way home from an impassioned meeting, cries for an uprising still fresh in her ears, Betsy Ross considers the task ahead of her. She thinks of past deeds, and the goals she holds most dear for the future. Above all, she believes that a true sense of purpose can be gained without compromising her hard-fought for morals. Her determination will be tested when she arrives at her house to find it being sacked by a group of English soldiers, out looking for some spoils.

The seamstress, according to history, was an unassuming Betsy Ross. The widely recognized image of Betsy Ross sitting in her rocking chair, bringing what would become known as “Old Glory”, the Stars and Stripes, to life is one that most school children know… at least any of us who grew up watching Schoolhouse Rock. Now take that image, and throw in a little Braveheart, maybe some Josey Wales, and a dash of Joan of Arc, and you’re starting to get an idea of what this book is about.

The writing style of Tommy Refenes is stylistically fast and loose. He switches from the serious tone of Ms. Ross’s inner monologue, to the tongue-in-cheek and not at all flattering banter of the poor English soldiers. The change happens fast, and before I knew it I was reading something that could have been a Monty Python skit. If you don’t really care for Monty Python, it’s okay… it isn’t too long before Refenes changes it up again and the action starts. The interior art by Brett Schmidt is what really caught my eye. It’s stark black and white scheme had me wondering if he was using black ink, and a lot of it, on white paper, or white on black. Either way, it turned out looking pretty cool, and it sets this book apart from the herd.

In the world of independent comics, where everyone is looking for the hook that can get them noticed, being able to establish your book as unique is a major step in seeing some degree of success. Hopefully that carries over into sales, because I thought that this alternate history of Betsy Ross in the early days of the American Revolution was interesting and entertaining enough to deserve some notice. It caught my attention among the new releases, and held onto it from start to finish. Now I’m looking forward to seeing how the action plays out for future issues. Who thought I’d ever say that about a book about a seamstress? 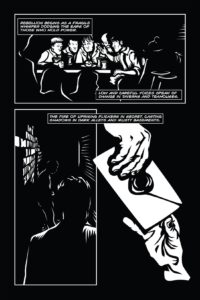 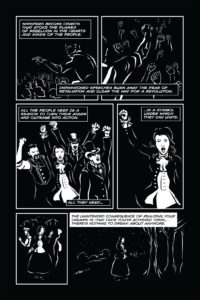 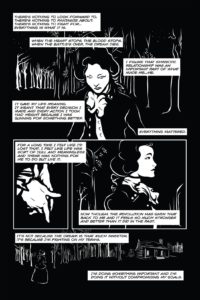