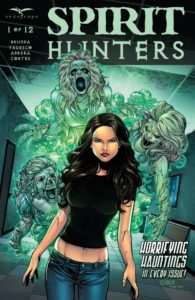 Ghosts and spirits have been with us since man first started walking the earth. What are they and what do they want? Why do some haunt places and seem to only mean us harm? One team of paranormal investigators sets out to answer that question, hunting the vengeful spirits that cross over to into our world and facing the most terrifying hauntings man has ever known.
———-

A mysterious death at Mercy Hospital in Buffalo, New York might not be a particularly high profile incident. The mysterious death of a young doctor working the night shift might make it a little more interesting. Make it a death by drowning in a bathtub full of boiling hot water and rule it an “accident”, now we’re talking about something that draws some attention. So, when Dr. Hewitt’s death makes no sense, when the circumstances just don’t look like it could have been accidental or suicidal, but no other rational explanation fits, who you gonna call?

No, not Melissa McCarthy.

Doctor Michael Chase has an interest in paranormal happenings, and he’s assembled an unlikely team of ghost hunters to help him track down what goes bump in the night. Former police detective Jerome Ferguson can handle the investigative work. The flirtatious Vera is the tech-genius and computer guru. Dr. Chase’s nephew Curtis is the required skeptic, able to take on some of the grunt work. That leaves Ellen, the young psychic whose past with Dr. Chase left off on a less than happy note, the details of which have yet to be revealed.

Chase and his Spirit Hunters arrive at the hospital, their mysterious backer able to not only provide the team with monetary funding, but also with licenses granting them civil authority to assure local cooperation in their investigations. As they dig deeper into the death of Doctor Hewitt, the trail leads them into a mess of unanswered questions. Is the doctor’s death an isolated incident? Could it have been accidental? Or is there a dark, supernatural presence lurking the halls of Mercy Hospital?

Come on, you and I both know the answer there. Hell yes a dark supernatural presence is behind it all! The series isn’t about a team of elite lawyers called “Accident Chasers”. It’s Spirit Hunters, and it says right there on the cover, “Horrifying hauntings in every issue!” So if we already know that poor Dr. Hewitt is the victim of paranormal activity, why bother reading the book?

As has become the case in the Zenescope line of books, the story itself isn’t the selling point. Not to say that they haven’t had some pretty impressive arcs, but it takes more than a concept to push a title away from the crowd. Fact is, world ending apocalyptic events are pretty much a dime a dozen in the comic book world, so just offing a bunch of people isn’t going to get the job done. What a story really needs is a writer who can introduce characters who don’t just fit neatly into a set of stereotypical roles.
In Spirit Hunters, Tedosco & Brusha have filled those common roles, but they’ve created a group of characters who are just a little left of the norm. The computer genius isn’t a skinny dude wearing glasses and a World of Warcraft t-shirt, she’s tattooed and flirtatious, and kinda hot. Ferguson isn’t the average paranormal investigator trying to prove to the world that he’s known the truth all along… He’s a retired cop whose seen things he can’t explain, determined to make sense of them for his own peace of mind. And Ellen the psychic? She’s suffering from an apparent case of paranormal PTSD, and hasn’t got a very good handle on her abilities.

Taken together, and this team of investigators fills all of the required tropes, but no single individual is slotted strictly into a single role. Even the “plucky comic relief” is spread out over multiple characters, not just restricted to skeptical and not particularly skilled nephew Curtis. It’s that character interplay that made the first of this twelve issue series a blast to read. It isn’t just nerds waving ectoplasmic spectrometers around and spouting technical jargon. The dialogue is pretty natural, and the investigators do some actual investigating… checking records, interviewing witnesses, like they really know what they’re doing.

In the past, I think Zenescope has been written off as more of a line of books featuring sexy characters appealing to the adolescent readers. I’ve read some of their books before, but they didn’t really seem to stand out. Lately, however, they’ve been getting my attention all over again… and not just because of the sexy heroines. The characters and writing have started to really come across with some depth. Some of the titles and their characters have started to remind me of shows like Buffy the Vampire Slayer, just in the way the people interact. There’s wit and banter, and it isn’t coming across as forced or contrived.

To be sure, there are still titles that haven’t really caught my interest, but the ones that have are doing it through really solid writing to go along with Zenescope’s already impressive track record for hiring talented artists. Okay yeah, there are still sexy heroines to be found, but they aren’t the driving force of the titles in general, and in Spirit Hunters in particular. Julius Abrera’s character designs are showing us more or less real people, wearing normal everyday clothes instead of leathers and corsets.

Fans of the horror action genre, anyone who’s watched more than one episode of Ghost Hunters or thought The Conjuring was a pretty cool movie, should definitely give Spirit Hunters a look. It’s a well-written book that builds on what’s been done (and done… and done… and done) before, but doesn’t rely on it too heavily, instead choosing to build on it.

And the series is kicking off in the right season, avoiding the need for a “Halloween Special”… If nothing else, we should be thankful for that.