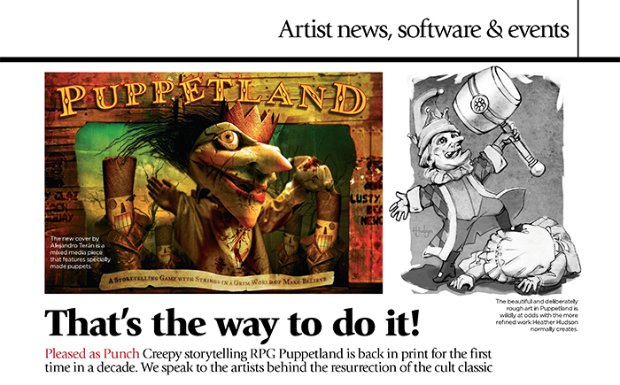 THE SKIES ARE DIM ALWAYS SINCE THE MAKER DIED

In one golden hour, you and your friends shall weave a tale none will soon forget: a tale of good-hearted puppets in a bad-hearted world. You shall rise up against the savagery of Punch the Maker-Killer with his army of Nutcrackers and his terrible Boys, sewn from the flesh of the Maker of all puppets. You shall be steadfast and true. You shall likely die trying.

Puppetland is a storytelling game. You play a valiant puppet who speaks aloud every word you say. You speak for your puppet and the Puppetmaster says the rest. You surprise each other at every turn, collaborating moment by inspired moment to unlock your own creativity and find the puppet within. This lavishly illustrated edition of Puppetland has been significantly revised and expanded. It includes a grim storybook fable of the Maker’s foul murder; the true story of the creator’s life in Puppetland; and new Tales ready to be played, written by a brilliant collection of authors:

Your puppets are ready to take the stage. But speak softly, lest the Nutcrackers hear — and come to call with a sharp rap-rap-rapping at the door.

What others are saying about Puppetland:

“Not only an interesting, haunting and funny adventure game about puppets but a clever exploration of the relationship between RPGs and theatre.” — James Holloway (www.rpg.net).